NHL Prospects To Acquire After The NHL Trade Deadline 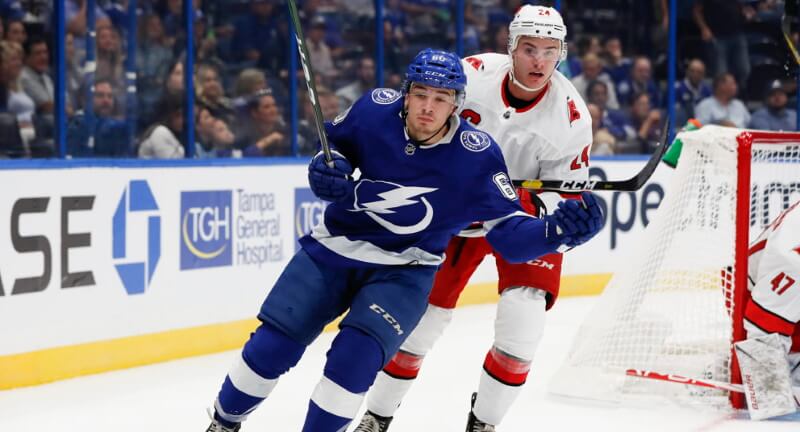 The NHL Trade Deadline is concluding today at 3 PM Eastern. Teams are scrambling to stack their rosters in preparation for the playoffs, which is surely going to be unique. Each playoff team has increased focus this year on adding more depth to their roster’s – injuries and COVID Protocols will be gruesome. Not only will NHL teams be gearing up for playoffs, but NHL rebuilders will also ship grizzled veterans away, leaving spots available for NHL-ready prospects to step in. This will be a less in-depth article, but in replacement will be a much larger group of players to consider for your fantasy playoffs. Most of you readers have playoffs that occur before the NHL season concludes, so young prospects have the highest chances of producing points for you.

Using Fantalytica, a prospect research platform, we’ve gathered 10 players that could be useful to you for the playoffs. Let’s begin! 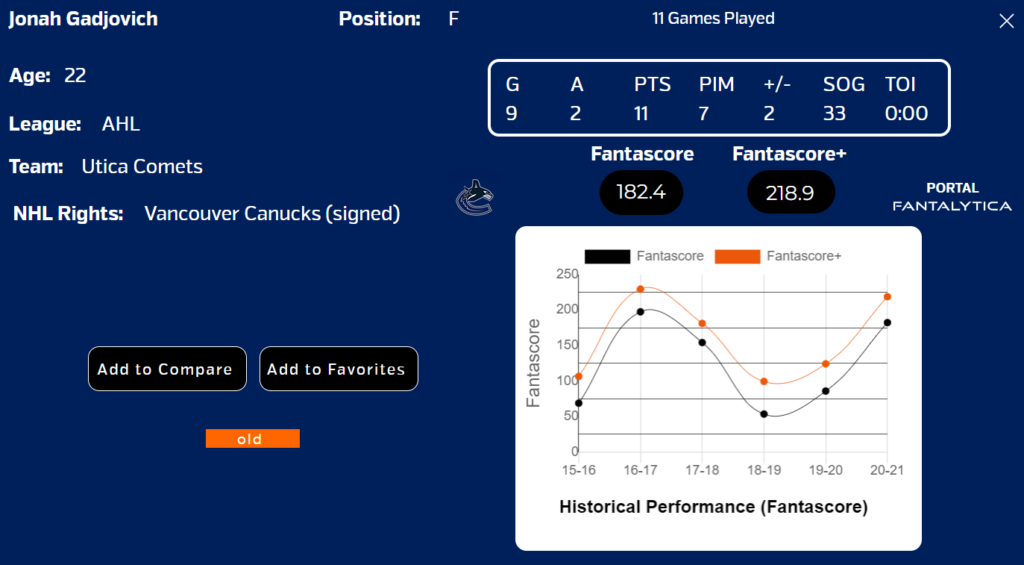 Gadjovich has taken some time to acquaint himself with the rigors and speed of a professional environment. Some still believe his skating is not compliant with the NHL’s status-quo. Although that’s probably true, Gadjovich will be deployed on a Vancouver team that already has speed and grit. Plopping Gadjovich on a 2nd line Powerplay in front of the net could quickly solidify a future in the NHL. 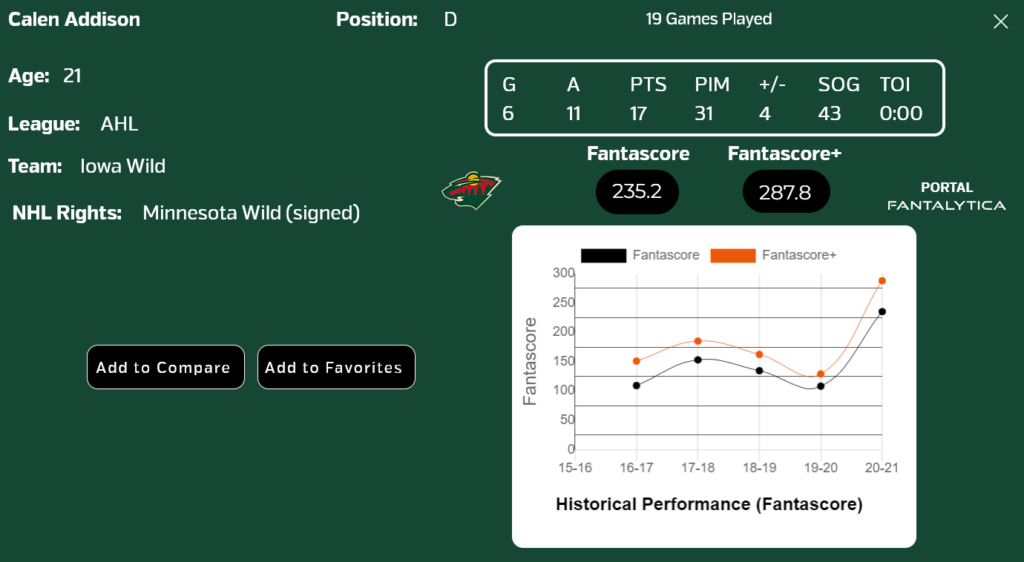 Although Addison is a rather young prospect, drafted in 2018, he’s already shown massive strides playing in the AHL. Besides having an elite mustache, Addison earned a few games with the Minnesota Wild due to his AHL performance. Minnesota has a top-4 that may be difficult to crack, but with no true offensive defenseman in their lineup on a nightly basis, Addison could get a real chance to play after the TDL. 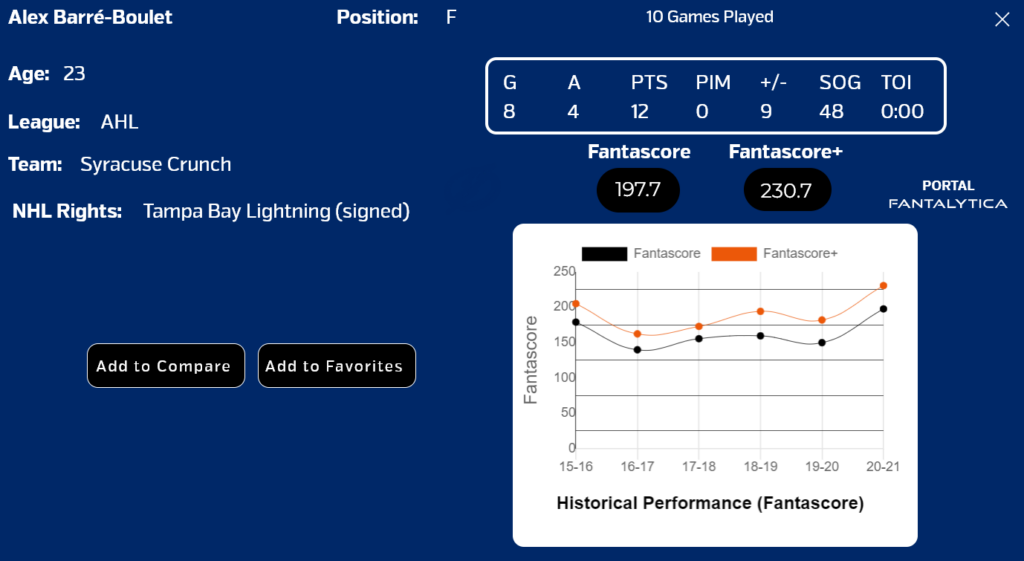 Every year it seems the Tampa Bay Lightning find a diamond in the rough. Yanni Gourde, Tyler Johnson, Matthieu Joseph, and this year’s Ross Colton prove this to be absolutely true. Barre-Boulet, a 23-year-old forward from the QMJHL, has transitioned to the AHL seamlessly. After a super short stint in the NHL, he has found himself on the Taxi Squad frequently. With Ross Colton finding a permanent spot for the remainder of the year, it could be hard to justify Barre-Boulet finding room in the lineup. One thing to keep in mind, Tampa Bay likes to rest their players in preparation for the playoffs. Barre-Boulet could easily play 10 games on the Lightning. With ample opportunity to produce, Barre-Boulet could sneak into a 4th line role heading into the final games of the regular season. 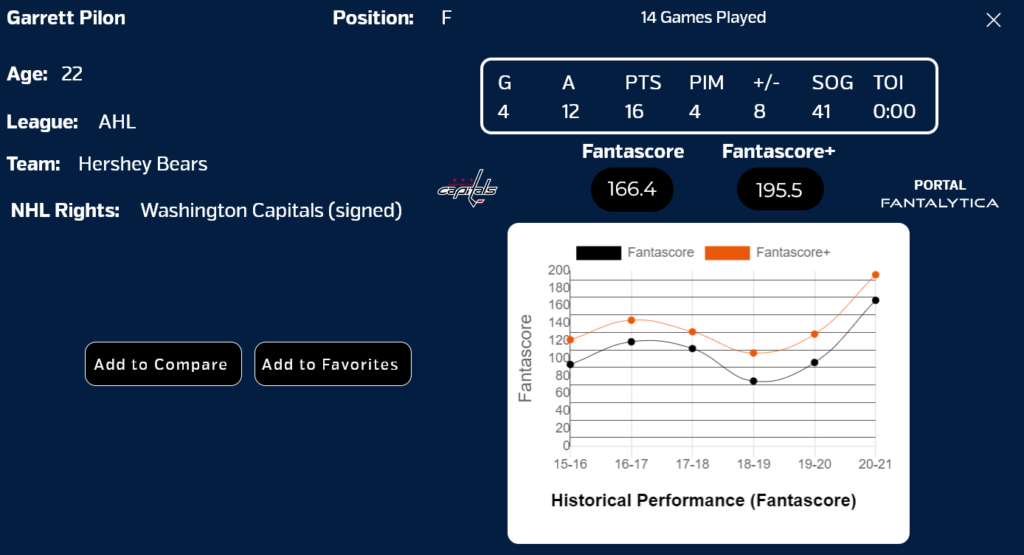 A player we’ve mentioned recently, Garret Pilon is a perfect candidate to play games with the Capitals before playoffs. Like the Lightning, the Capitals will need to be rested for the COVID cup. Pilon can handle a 4th line center job no problem – we think he gets a call-up soon. 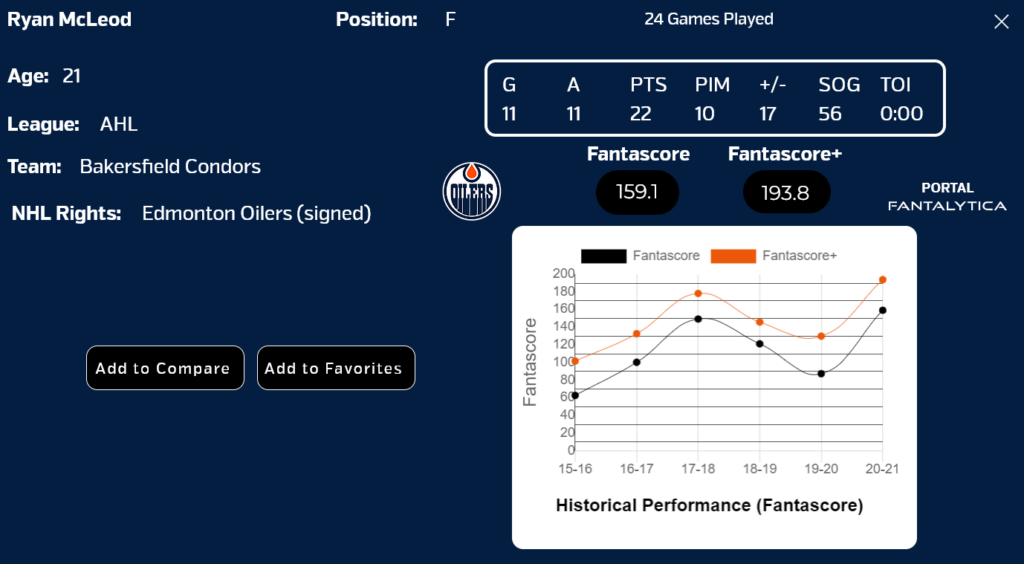 Ken Holland has a reputation for over-ripening prospects. Tyler Benson is seeing that in full swing – a 2016 2nd round pick. Although McLeod is a bit younger than him, a 2018 pick, finding some time on the 3rd line of the Oilers is a real possibility.

Yeah, we just mentioned him. The pecking order isn’t set in stone between Benson and McLeod. Wherever an injury occurs in the Oilers lineup will decide who comes up. Benson is a playmaker who needs a goal scorer and/or top 6 minutes. Ryan McLeod can play in the bottom 6 with energy and sophistication that most veteran NHL players tend to lose as they age. McLeod and Benson could both bring sparks to a top-heavy Oilers squad. 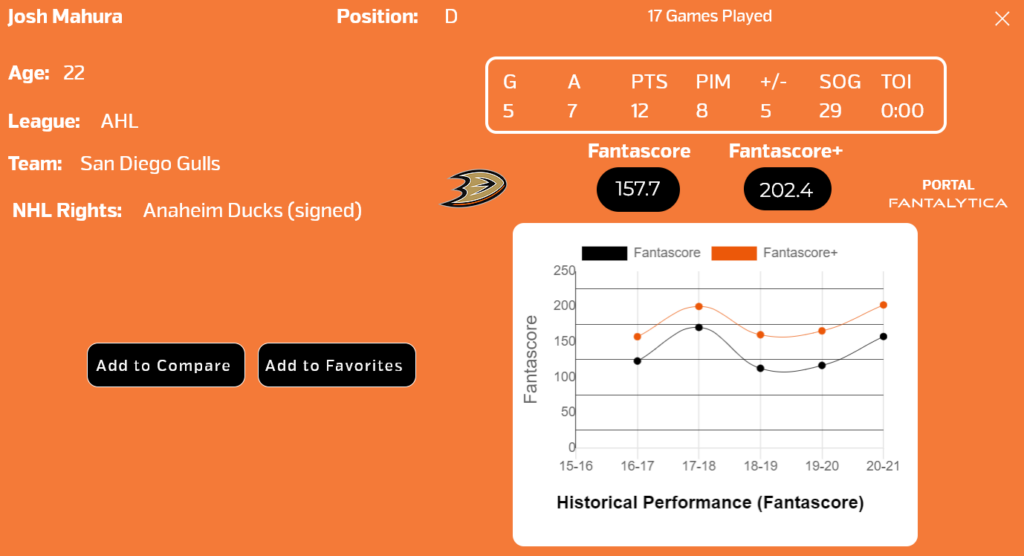 Mahura seems to impress the coaching staff every year when he gets his 10 or so NHL games. Frankly, it’s not enough for the Anaheim Ducks’ management. We don’t really get why, but regardless, Mahura could find some playing time alongside Drysdale or Hakanpaa before the NHL season ends. 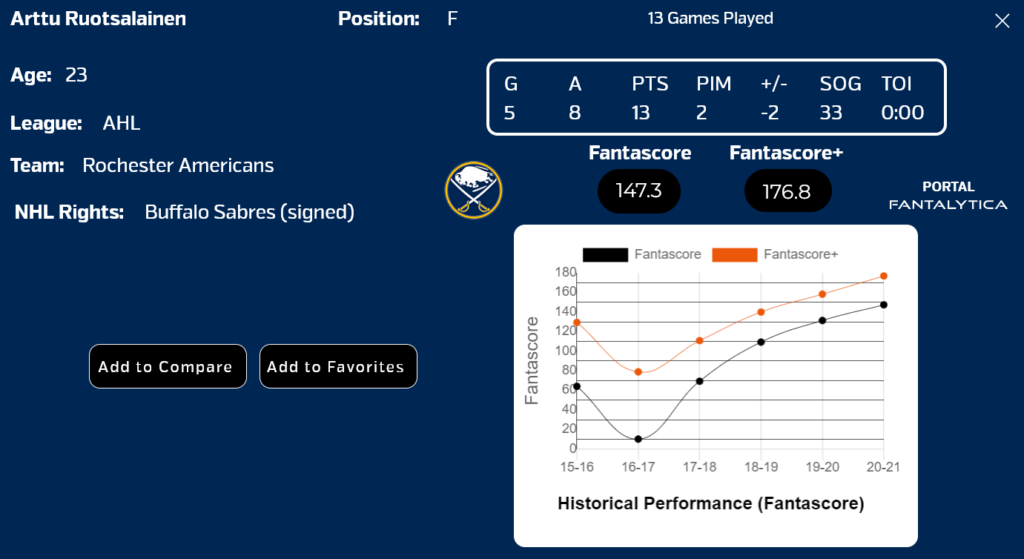 An unsigned free agent by the Buffalo Sabres, Ruotsalainen is destined to play NHL minutes after the Sabres unload their roster at the deadline. The Sabres are a tire fire, and at this point, they will be desperate to find players that can come in and take some jobs. Ruotsalainen has earned a real NHL look, and with a name like his, he is sure to stir up some fun Twitter name games with Ristolainen. 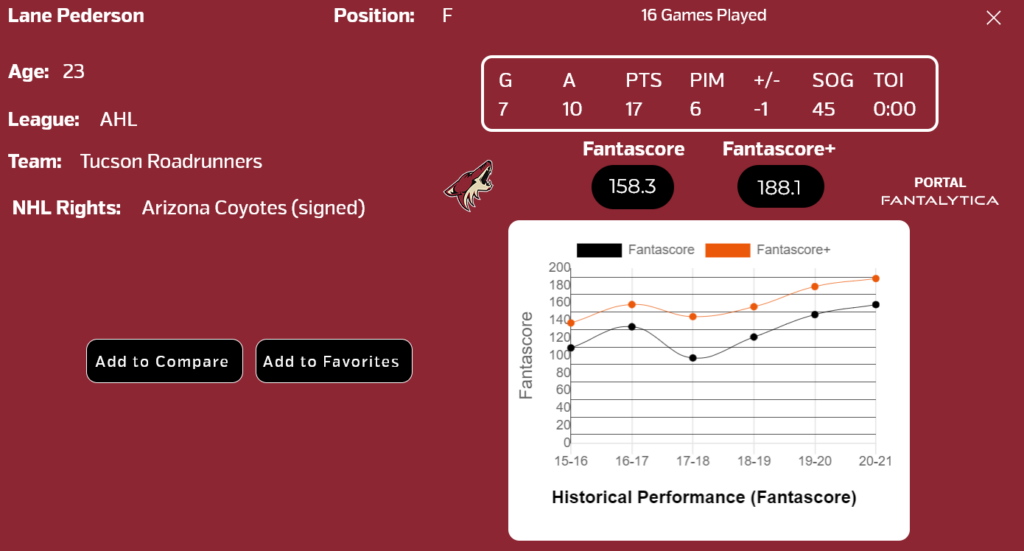 Another interesting free agent signed prospect, Lane Pederson has a great profile that we anticipate will find an NHL spot by year’s end with the Coyotes. After 16 games he has put up 17 points and 45 shots – numbers that make fantasy owners salivate. He’s already played an NHL game with the Coyotes, and we imagine he gets more. 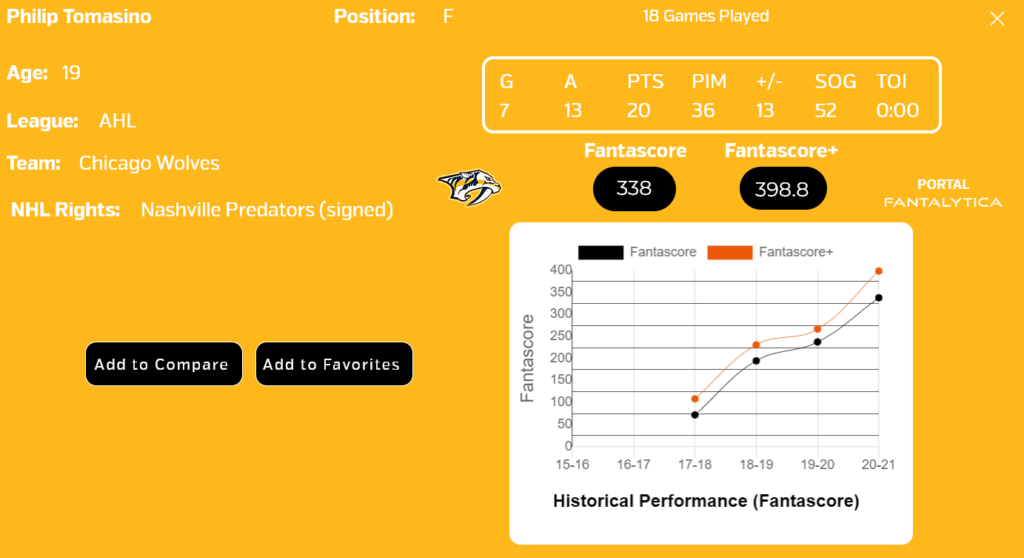 An elite prospect for the Nashville Predators, Tomasino is absolutely going to see NHL time this year. 20 points, 18 games, 52 shots. Pretty solid numbers for a 19-year-old. The Predators need some support, and Tomasino is the first forward they should turn towards. He won’t be cheap to acquire.

For more on the top NHL prospects, check out our Top 5 NHL Ready Defensive Prospects For Your Keeper League.