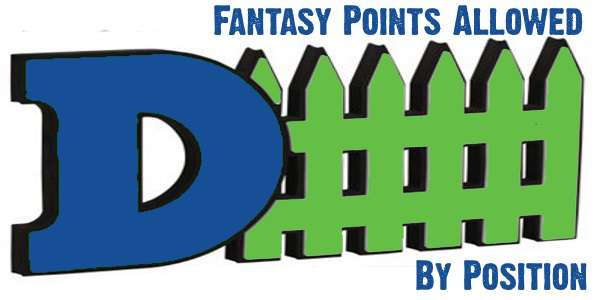 Much of our job here at the HQ is to help direct people to the incredible product that is our mother-ship, Fantrax.com. Fantrax.com only deals in season-long fantasy sports. So almost all of our content is, of course, focused on that. But who’s to say that a tool can’t be useful for both season-long and DFS? That’s just what my Fantasy Points Allowed aims to do.

In fact, don’t let the higher-ups know, but my Fantasy Points Allowed tool is definitely more useful in DFS, because of the ability to choose from the entire player pool on a weekly basis. It can help you make a decision between two or three players on your season-long roster. In DFS it can help you make decisions between 40 or 50 players.

What is the Fantasy Points Allowed tool?

The basic idea is so simple even a Cowboy fan could get it. Fantasy Points Allowed simply tells you how many points each NFL team gives up to each of the skill positions. It takes defensive stats and translates them over to numbers that are more meaningful to us in fantasy.

If we know that a certain defense gets gored by running backs all the time, then even a marginal back gains value in a given week. In season-long formats, we would then start that back. In DFS we use that back and save money for studs at other positions.

Fantasy Points Allowed is not really new. All I’ve done is take it a step forward and customized for the scoring systems of some of the major sites. The differences aren’t always major, but it’s always a good idea to be as accurate as possible.

How to use the Fantasy Points Allowed Tables

1.  Choose the scoring system you want to use

I’ve got it set up for the two big DFS sites of DraftKings and FanDuel, plus the standard and PPR formats on the Fantrax cash games. If you don’t play on one of these sites, you can use the scoring system (specific scoring is located below the tables) that comes closest to your league. In a nutshell, DraftKings is full point PPR, while FanDuel is half-point PPR. DraftKings also offers bonus points for big games.

2. Sort by the position you want to evaluate

You can sort ascending or descending. Ascending would show you which defenses are toughest on a given position while descending shows you which defenses you can exploit. The left column is the NFL defense in question and the right column lists their opponent in Week 1. You’d want to use players from the opponents of the defenses that allowed the most points to that position.

I’ll use the DraftKings table as an example since it’s the first tab. If you click on FPA-RB, you’ll see that the Bills and Lions gave up the most fantasy points to RBs. Their opponents are The Jets and Ravens. That tells me I might want to give a little boost to Alex Collins and maybe Isaiah Crowell or Bilal Powell. I’m leery of the Jets duo, but Collins just shot up my Week 1 rankings.

That’s it. The Fantasy Points Allowed tool simply gives you a way to focus your decisions by exploiting the weakest defenses in the NFL.

The fantasy points allowed data below is from the 2017 season. Yes, some defenses have changed quite a bit over the offseason. Over the past five seasons or so, I’ve still found the data from the previous season is still the best starting point. Beginning in Week 4 I’ll shift over to data from the current season, and Fantasy Points Allowed takes on more validity each week after that.