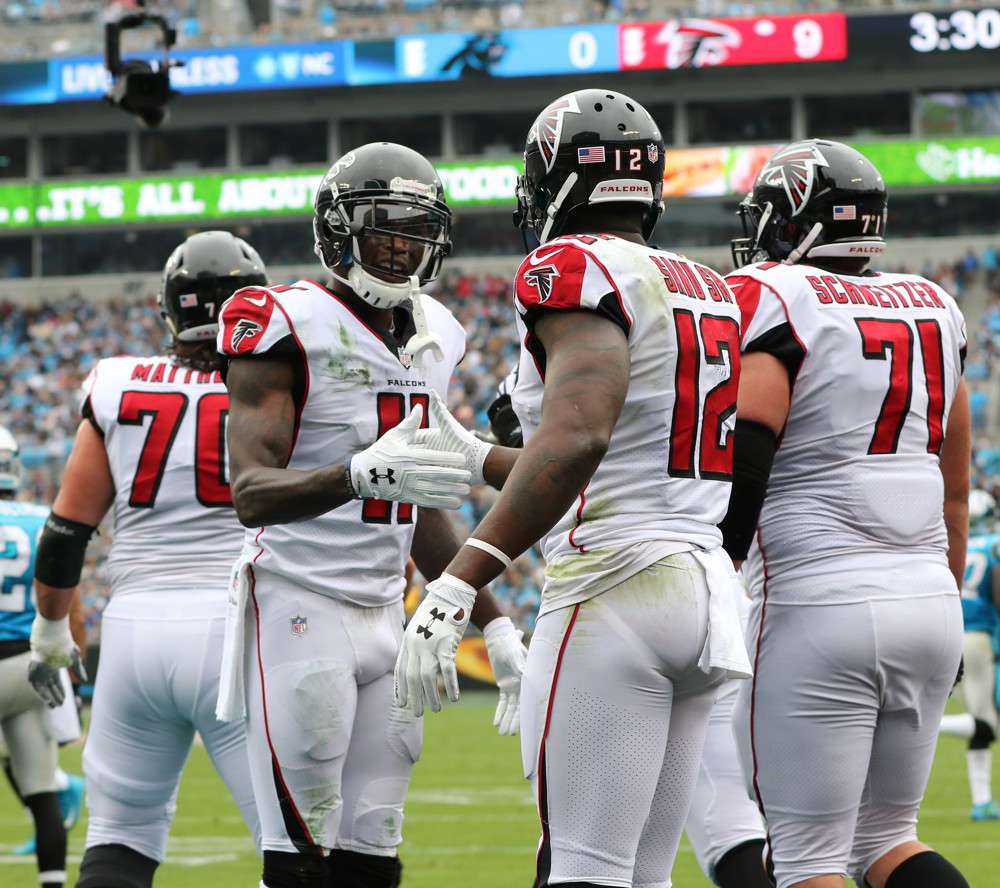 It seemed like every week the teams from the NFC South were causing a ruckus. It started early with Adrian Peterson barking at head coach Sean Payton for playing time. His exit from the team was the catalyst for Alvin Kamara’s emergence and the creation of “Boom and Zoom.” The ruckus continued with the Kelvin Benjamin trade while Greg Olsen recovered from a foot injury suffered in Week 2. In his stead, rookie Christian McCaffrey and Devin Funchess began to show up in highlight reels running fake wheel routes. Julio Jones broke the league in half with a jaw-dropping 12/253/2 stat line in Week 12. Meanwhile, the Buccaneers were holding odd team meetings: 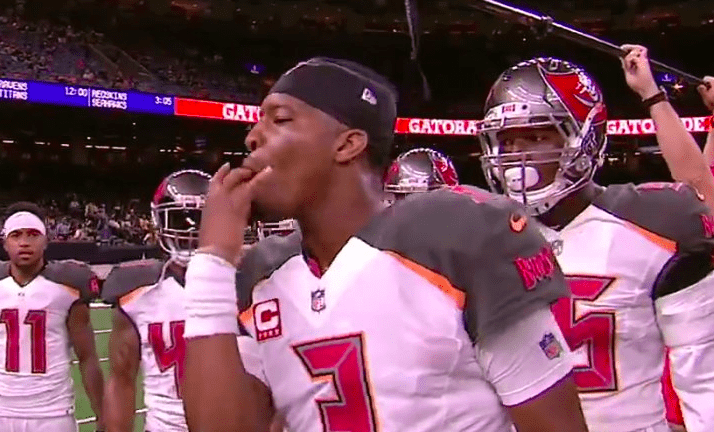 This division offers a lot of intrigue for fantasy owners with high-value assets on each team. Free agency has given some insight into the team’s plans for 2018, but the draft offers another opportunity to improve for next season.

For a brief dive into hilarity, do a Twitter search for #neverjulio. Josh Hermsmeyer of AirYards.com, the architect of the movement, has used his unique research to emphasize Julio’s on-field dominance. His performance, both for real and fantasy purposes, has been nothing short of elite. However, the Falcons could use some support at the position to keep their receiving group at the top of the division. 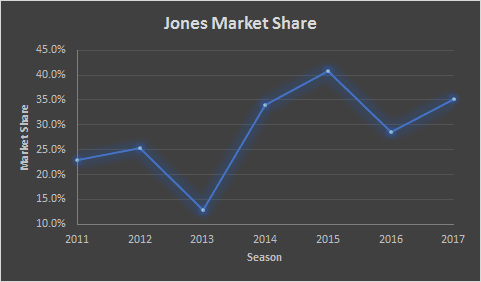 Mohamed Sanu and Taylor Gabriel have played their ancillary roles with highlight-worthy moments, but both have lacked the volume to be fantasy relevant. Remember the Falcons’ epic 2015 season where Matt Ryan hit career highs in yardage and efficiency metrics? Sanu and Gabriel totaled only 653 and 579 yards, respectively. Gabriel has moved north to the Bears, while Sanu turns 29. Their depth at receiver is running thin and could use an off-season boost.

The Falcons are currently 28th in remaining cap space (~$7.5M). This explains their limited free agency moves, with none expected before the draft. The offense could use another wide receiver that could start in the slot and then move to the outside as Sanu’s athleticism wanes. That’s D.J. Moore. Moore’s size allows him to work on the outside, but his lack of physicality could peg him for a slot role his rookie year. Moore could fill Taylor Gabriel’s slot while developing his separation skills. With his potential, the Falcons can keep up with the division on offense.

The writing on the wall is pretty clear. Greg Olsen’s been in the league for 11 years. He’s 33 years old. Most importantly, life after football is already calling him. While he’s committed to the upcoming season, his contract ends after 2018. A critical weapon in Cam Newton’s arsenal, the Panthers need to replace the veteran tight end.

Olsen’s averaged over seven targets and 59 yards per game the last five years. His usage has equated to that of Rob Gronkowski and comes at a multi-round discount. However, his touchdown rate has kept him from the elite tier of tight ends. The Panthers are in an even worse cap situation than the Falcons after the trade for Torrey Smith. In addition, their draft and trade acquisitions suggest they’re not looking for a copy of the veteran tight end. McCaffrey, Smith, Russell Shepard, Curtis Samuel and Damiere Byrd all have the same speedy athletic combo to go with Cam Newton’s style of play. Couple that with their bottom-third ranked offensive line, and their next tight end might be more a part of the blocking scheme than a passing target.

Defensive gaps are expected to be addressed with the Panthers’ early draft picks. Despite receiving a tender, Damiere Byrd’s Week 1 availability is still unknown. The team could look to offset his absence with an early to mid-round receiver prospect. A mid to late-round tight end prospect such as Troy Fumagalli would offer the Panthers what they need. Known for his exceptional blocking skills, Fumagalli’s pre-snap adjustments have boosted his run blocking performance. In addition, he’s a solid receiver capable of finding soft spots in zone coverage. With the quick and high flying assets already on the Panthers, Fumagalli could return sneaky value working with Olsen before he retires.

These images are probably going to be used as props in a defensive coach’s “What Not to Do” speech before they play the Saints.

It was painfully obvious how poorly Adrian Peterson fit in the Saints offense by Week 2. It became even more obvious after the trade when Kamara began to break every efficiency metric at the position. But in his wake, we watched Drew Brees have his lowest total fantasy output in the past five years.

Sure, when your running backs are averaging 4.1 and 5.1 targets per game with one, or both, totaling over 100 scrimmage yards, you can afford to pass the ball less often. Despite Brees’ volume dipping, his completion percentage and adjusted yards per attempt increased, which showed in the offensive outputs the Saints produced most weeks during the season. But other than the running backs, who was Brees throwing to in 2017?

Michael Thomas had 149 targets in 2017. Ginn came second in targets at 70. The Saints will need to devise a new plan of attack for 2018 as opposing teams scheme against Kamara and Ginn turns 33 years old. Willie Snead is on contract for 2018 and can fulfill the slot role while sharing snaps with Ginn. The Saints need a wide receiver opposite Thomas to balance the offense.

Deon Cain can play on the outside and would be an excellent complement to Thomas’ skillset. Cain has the Clemson pedigree that fans of the game look for in star wide receivers. A Thomas-Cain tandem would force defensive secondaries to maintain perimeter vision opening up the middle of the field for either the slot receiver or running backs. Cain’s raw athleticism will get him highlight reels in 2018, but he needs to develop his route tree to progress at his craft. Being on a Drew Brees-led offense can cover up for your shortcomings, but Cain will need to pick up his skills to maintain a starting role.

Bizarre. That’s the simplest way to describe the Buccaneers’ 2017 season. They have an exceptional tight end in Cameron Brate (had a statline of 88/660/8 in 2017), but they decide to draft O.J. Howard in the first round. DeSean Jackson has a down year. Doug Martin returns from suspension and manages a whopping 406 yards over 11 games. Mike Evans takes a step back in both yardage and touchdowns. Jameis Winston hurts his shoulder against the Saints in Week 9, giving way to the return of Ryan Fitzpatrick. Speaking of that game, Winston and Evans started a fight. Meanwhile, Dirk Koetter’s predictable play calling leads a team in playoff contention the previous year to 5-11.

However, there were bright spots. Rookie Chris Godwin started seeing more snaps, erupting in the season finale with a 12/111/1 stat line. Sophomore Peyton Barber also started to come on late in the season as Martin faded. Barber served well in a backup position, but he lacks the elusiveness and decision-making skills at the line to be the unquestioned starter in 2018. The release of Doug Martin signals that the Bucs are looking for a lead back that they can find through the draft.

Drafting a running back in the early rounds became a priority after the team made free agency acquisitions to the defense. The Bucs have early picks in both the first and second round (third round pick traded to the Giants). With Barber’s size, Ronald Jones would offer a complementary skill set to the backfield. Jones’ acceleration and shiftiness allow him to follow lead blockers and adjust to linebackers.

The Bucs’ average offensive line would prove to be a challenge for the rookie, but he’s shown to be more than capable in both the run and passing game. A Jones-Barber combo would be similar to the Jamaal Charles-Spencer Ware combo in Kansas City from 2015. Jones with his slashing style running would be offset by Barber’s size and one-cut tendency. This type of acquisition would bring balance to a pass-heavy offensive attack. It would also give Jameis more options, as defenses wouldn’t be able to key on specific formations tipping his intentions on each play.