The AFC West began the 2017-2018 off-season with the blockbuster trade between the Kansas Chiefs and Washington Redskins. This likely triggered the domino effect that will ultimately determine where Kirk Cousins will play in 2018. Ironically, the Denver Broncos are in the running for Cousins as they look to overhaul their quarterback roster. In addition, the Raiders are coming off an underwhelming season from Derek Carr and the return of Marshawn Lynch. Finally, the Los Angeles Chargers improved on both sides of the ball, but are still looking for that missing piece to get them back into the playoffs. This next part of the series looks at how each team in the AFC West can add to their franchise through the upcoming draft or free agency. Moves made this off-season will give insight into how each team will assert its dominance.

After posting a career year, it’s no surprise Alex Smith was traded. Highest passing yards. Second highest completion rate. Third highest rushing total. After drafting Patrick Mahomes in the first round of the 2017 draft, Kansas City could not have hoped for a better situation to end the season. Smith’s market value peaks, Mahomes showcases his talent in a regular season game (albeit Week 16), and Kareem Hunt, who they traded up to draft in the third round, leads the league in rushing yards.

But the wide receiver production was directed by, produced by, and featured Tyreek Hill. 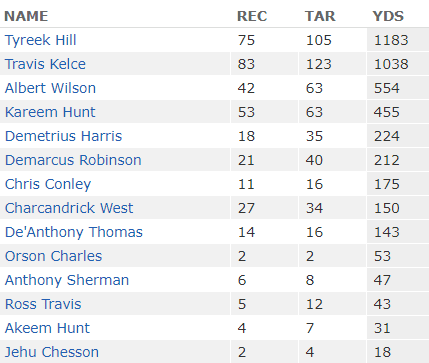 Hill accumulated more yards in the 2017 season than the other wide receivers on the team combined. His speed turned Alex Smith into an almost perfect passer on balls over 20 yards. The returning cast provides veritable receivers in the short-middle areas of the field, but they’re lacking weapons on the outside. Rumors are also circling about Albert Wilson following Matt Nagy to Chicago. But even if Wilson stays, a larger presence at the position would help the offense.

With their mid-second and third-round picks, it’s likely the Chiefs will focus on defense. If not, Equanimeous St. Brown presents an interesting case to the Chiefs. His size and speed will create a second mismatch for any opposing defense, putting the other Chiefs pass-catchers in positive situations. Think of the 2015 Steelers, with St. Brown being Martavis Bryant. The one free agent fitting the same description is Donte Moncrief. Moncrief’s career has been riddled with injury and disappointment. Consequently, he’s only shown glimpses of his potential the past two seasons. The Chiefs could take a shot on the Colts’ No. 2 receiver with limited liability to the team both financially and offensively with the other personnel currently in place.

I’m sure head coach Anthony Lynn would love for Philip Rivers to play into his 40s. Fantasy owners wouldn’t mind, either.

Rivers has been a value draft pick four out of the past five seasons. His week-winning potential (averaging  4,491 yards and 31 TDs per season) is kneecapped by his perennial meltdown game. But we can’t be blessed with bolo ties and unforgettable meltdown GIFs forever. The Chargers need to plan for the future, and it’s hard to see backup QB Cardale Jones as part of the plan. Jones’ accuracy issues and inability to hit timing throws present a major problem to Keenan Allen. The Chargers should be looking to find a better successor to Rivers via the draft this year.

Mason Rudolph has the potential to become the Chargers’ next QB. He’s capable of making accurate deep throws and can manipulate defenses with his eyes and body movement. But he struggles in delivering the short-medium throws from a stable platform. This has steadily improved during his time at Oklahoma State. While he’s demonstrated impressive decision-making acumen, his problem comes in the execution. Many of the details in his game can be coached to the professional level. Therefore, Rivers being under contract until 2020 (potential out in 2019) gives the team time to elevate Rudolph’s game.

The Raiders offense remains mostly intact, despite the return of Jon Gruden. Michael Crabtree is returning. Amari Cooper and Derek Carr have the offseason to get healthy. Marshawn Lynch is also expected to return. But if your starting tight end is soon-to-be 31-year-old Jared Cook, it’s time to start looking at replacements.

Tight ends have seen inconsistent usage with multiple players attempting to fill in the role. Clive Walford is only 26, but it’s telling when a veteran gets signed and matches Walford’s two-year yardage output in his first season. The Raiders produced a top-10 offensive line ranking, according to Football Outsiders, allowing an athletic tight end to see the field. The team should be looking to replace Cook once his contract expires at the end of the 2018 season.

Running back is the only offensive position the Raiders are expected to invest in during the first round of the draft. Their defense requires some attention, making it more likely a tight end would be drafted in either the second or third round. Dallas Goedert is well-known for his pass-catching ability, with the size and athleticism to adequately replace Cook in the Raiders’ offense. His blocking skills, or lack thereof, might hurt his draft stock, but the Raiders can offset this liability with their current line personnel. Their current cap situation restricts the team from making too many moves in free agency, so if they address this situation, I expect it to be via the draft.

It’s easy to point to bad QB play as the reason for the Broncos’ down year. Despite C.J. Anderson cracking 1,000 yards for the first time in his career, the passing game was difficult to watch. The trio of starters featuring Trevor Siemian, Paxton Lynch, and Brock Osweiler averaged 229.25 yards, 1.2 touchdowns, and 1.25 interceptions per game. This quality of play has steadily decreased the total offensive output for the Broncos over the last five seasons. 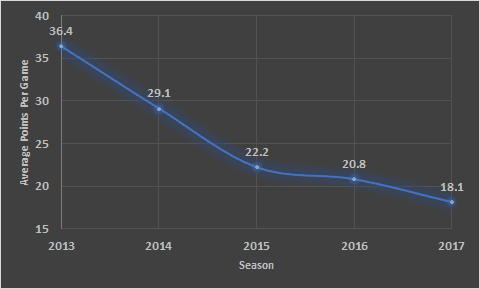 It was impossible for the Broncos to repeat their historic 2013 performance, but there should have been a better plan to survive once Peyton Manning retired. The Broncos now find themselves in a cap restrictive situation while still courting Kirk Cousins. If their Plan A (Cousins) comes to fruition, it will be fascinating to watch the financial shuffling that will have to occur in order to meet his reported contract demands. Plan B should include one of the Minnesota Vikings quarterbacks that is still an upgrade but would cost much less than Cousins.

At the fifth overall pick, if the Broncos select a QB, you’re looking at their Day 1 starter. Josh Rosen’s technique gives him the slight edge for taking over as the Denver signal caller. His footwork and mechanics help balance his lacking arm strength. His college deficiencies could be masked if working with Demaryius Thomas and Emmanuel Sanders as his primary weapons. If the Broncos can provide a third reliable option in the passing game, tight end or slot receiver, then Rosen could show some promise in his rookie year.