Excitement for the 2018 season is alive and well with the recent conclusion of the Scouting Combine. Analysts, coaches, GMs and, of course, fantasy owners are going over each prospect’s measurables and responses during the week. Coaches and GMs have the upper-hand, but we can still speculate as the draft draws closer. Building on the first piece in the series, we’ll be taking a look at the AFC South. Injuries on the Colts’ and Texans’ rosters add to the lack of clarity, but there are some incoming rookies that can add value to all of the teams in this division.

Raise your hand if you thought I was going to say the Jaguars’ position of need was quarterback. If you did, you’d be only half wrong. It was in my initial notes, but the Jags and Blake Bortles recently struck a sensible deal, giving them offensive continuity. However, Blake Bortles threw for 3,687 yards and 21 touchdowns last year, and the tight end position accounted for just 505 of those yards and five TDs.

This isn’t a new problem. It’s not surprising that a cast of a post-Broncos Julius Thomas, Clay Harbor, an aging Marcedes Lewis, Ben Koyack, and James O’Shaughnessy can’t produce more than 15% of their team’s total yards. They have their QB, Leonard Fournette and T.J. Yeldon are returning, and they have a plethora of receivers. An upgrade at the tight end position would both help Bortles and give the offense another weapon.

But let’s be realistic. The Jags don’t need a Jordan Reed/Evan Engram-archetype tight end. Head coach Doug Marrone made it clear that they are a run-first offense. This formula got them one game short of the AFC championship game, and there’s not much evidence of this changing. A tight end prospect that is primarily a blocker with receiving capability would serve a greater purpose. This removes prospects like Hayden Hurst and Dallas Goedert from consideration. Excellent move tight ends, in their own right, but not what’s needed. Dalton Schultz fits the mold of what Jacksonville is trying to do. Already graded as an excellent blocker, Schultz could easily integrate into the offense and become a possible streaming tight end on a potent offense.

I can hear the Derrick Henry mob stampeding towards my house. Please, let me explain. It is Henry’s time to be the lead back in the Titans’ offense. He’s surpassed DeMarco Murray in almost every metric while maintaining the athleticism to be a “home run hitter.” 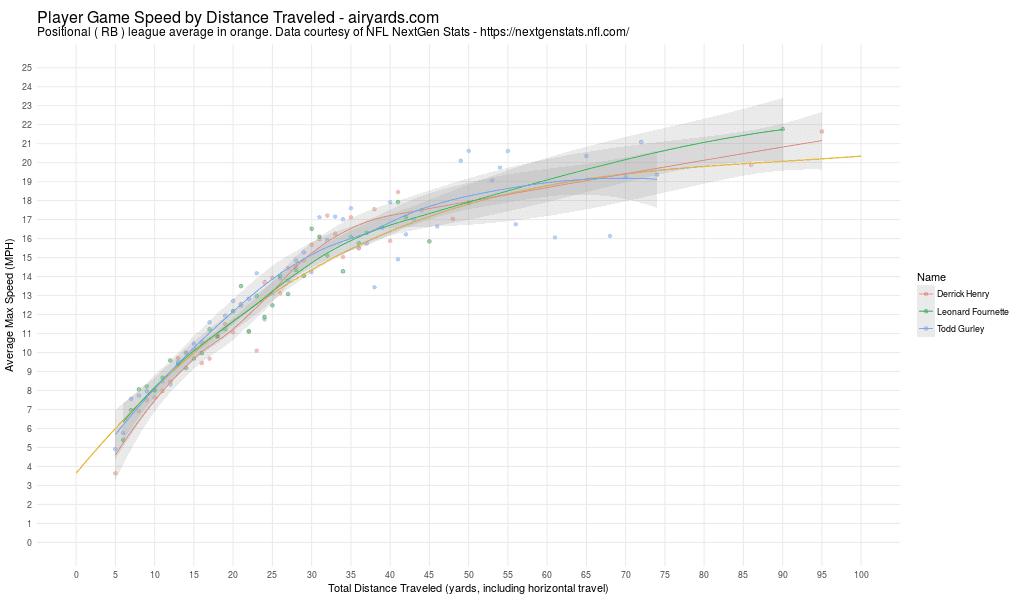 Henry posted the fifth highest top speed on a single play (third best for an RB) during the 2017 season, according to Next Gen Stats. His speed also compares well on a per-rush basis to Leonard Fournette and Todd Gurley. However, injuries got to Fournette and Gurley’s historic fantasy playoff run will be hard to duplicate. Volume is king in fantasy football, but an RB1 doesn’t have to get all of the touches. As we’ve seen in places like San Diego, Washington and especially New Orleans, a running back that fills the scat back archetype can be invaluable.

The Titans have the 25th overall pick with no immediate offensive needs. Expect them to focus on their line and defense early in the draft. But if they’re going bargain shopping, Martez Carter out of Grambling State could be what they need. Loftily compared to Tarik Cohen, Carter has the explosive features for the third-down/pass-catching role. A player of his caliber could spell Henry, offering the Titans an efficient running back combo. This would aid in converting key third downs and put them in more scoring opportunities without requiring high draft capital.

Here’s a riddle for you.

Let me guess. You can’t. That tweet just about sums up one of the problems plaguing the Colts. The situation has been great for fantasy, though. We knew when to start T.Y. Hilton, Jack Doyle was mid-range TE1, and Frank Gore got us 80 yards and a couple of catches. That was it. However, with Andrew Luck returning, the team needs to keep him upright. This means offensive linemen and a more dynamic pass attack.

Hilton has had a sub-1,000 yard season twice in his six-year career. Consistently ranked in the top 20 of wide receivers, Hilton has established himself in that second or third tier of receivers. A perennial early-round draft pick, his skills as both a deep threat and skilled route technician highlight his impact on the offense. That said, he could use a sidekick or two.

At the third overall pick in the draft, it’s easier to see the Colts drafting an offensive lineman. If they begin to look at the WR position in the second round, D.J. Chark could give the Colts the added dimension they need. A tall and fast wide receiver would help keep safeties in check if they lined up opposite Hilton. Route running and separation is an issue, but any additional time for Luck in the pocket is essential to the Colts’ long-term success. But with their wide array of team needs, using draft capital might not be the most optimal solution. Free agent Brice Butler remains an untapped high-ceiling receiver. He’s shown flashes of his speed and athleticism during his time in Dallas when given the opportunity. But he lacks consistency. With a cheap contract, the Colts could pick up an explosive player to help their team.

The best regular season game of the 2017 season came on October 29 when the Texans traveled to Seattle and nearly won in a 41-38 slugfest. Before succumbing to a season-ending injury in practice the next week, Deshaun Watson put on a show. He went toe to toe with Russell Wilson. Deep bombs to Will Fuller and DeAndre Hopkins. Watson racked up 402 passing yards that day, but Houston’s tight ends (Stephen Anderson and Ryan Griffin) amassed only 21. They need an upgrade.

The list of starting TEs for Houston the past five seasons includes:

Fiedorowicz brought the spotlight back to the position in 2016, but he suffered three concussions in 2017. Reports suggest he may retire because of the brain trauma, highlighting the need for a replacement at the position. Stephen Anderson stepped in as the last man standing. Fitting the move tight end mold, Anderson has the athleticism to win in space, but he can’t block off the line. He must improve in this area to maintain a starting role.

Houston has limited draft capital this season after their trade with Cleveland in 2017. Their defense and offensive line should take priority over selecting a TE in the third round. Chris Herndon would be a potential late-round project for Houston to consider. Herndon’s size and skills meet the criteria of what the Texans need at the position. A strong blocker with capable hands, Herndon’s raw talent could be coached into a weapon. Free agency also offers some options. Virgil Green and Niles Paul are both cheap options at the position and are known for their blocking abilities.