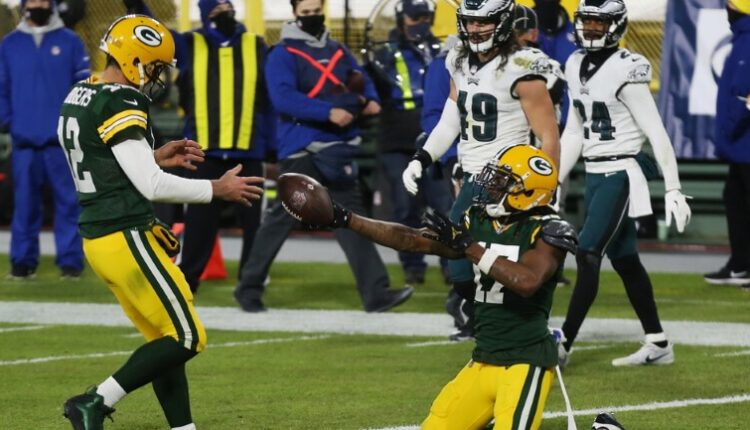 The NFL Draft is on the horizon, which means you need to know what draft needs are pressing for every team. This article will focus on the draft needs of every team in the NFC North. With the 2022 free agency bonanza essentially over, the NFL Draft is the last chance for many teams to acquire impact players before training camp kicks off this summer. Even my bozo Lions have a shot to secure capable starters in this year’s draft (I’m terrified they will botch it because that’s all we’ve ever known in Detroit). The Packers’ reign in the NFC North carries over from last season. Yet, the Packers have needs in the NFL Draft just like the Lions, Vikings, and Bears. Let’s break down these needs!

Aaron Rodgers has all the pressure on him now. Every time he takes a snap at Lambeau, every mistake will eventually lead back to him. He got what he wanted. The cash and the attention. Now he has to perform. And not just perform, but take the Packers to the Super Bowl. His playoff record is starting to look suspect. If he doesn’t carry this team deep in the playoffs, fair or not, his large salary will start to loom large over the holes on this Packer roster.

It's plays like these that separate Aaron Rodgers from any other QB I've seen.

And this isn't one of his "highlight reel" throws. He does it 𝗿𝗲𝗴𝘂𝗹𝗮𝗿𝗹𝘆.pic.twitter.com/HiwnGSDmdT

The Davante Adams trade with Las Vegas has given the Packers four selections in the first 59 picks. The Pack’s looming holes start at WR. Sammy Watkins has veteran savvy but has lost some of his explosiveness from earlier in his career. That leaves old man time (in NFL years) Randall Cobb, Juwann Winfree, and Amari Rodgers to help Aaron Rodgers win another ring. When the Packers lost to the 49ers in the divisional round at home last year, a lack of offensive explosiveness outside the hash marks became more obvious. This year’s draft has plenty of quality WR options to choose from, so don’t be surprised if two of their first four picks end up being wideouts.

The offensive line suffered two torn ACLs last season. Both to starters. Elgton Jenkins and David Bakhtiari. Lucas Patrick left for Chicago in free agency as well leaving the line as the other key area of need in the draft. Packers GM Brian Gutekunst seemed very relaxed about the o-line situation at the NFL’s annual meetings. With picks 22 and 28 in round one, shoring up the offensive line might be more difficult at those spots unless they package the two picks together to move up in the top 12. Central Michigan center Bernhard Raimann could be around in the early 20’s, so the good news for the Packers is they have a lot of picks to be flexible with in response to a fluid draft.

The Vikings have made sweeping changes to their coaching staff and front office, but they still have Kirk Cousins at QB. Whether that makes you happy or sad is kind of like the modern-day version of the glass is half full or half empty optimist test.  There is no debate however that Cousins is running a potent offensive attack with Dalvin Cook, Justin Jefferson, and Adam Thielen ready to make a title run (seriously!). As of now, they have the 12th pick in the NFL Draft. New GM Kwesi Adofo-Mensah had been the vice president of football operations for the Browns while new head coach Kevin O’Connell is coming off a Super Bowl victory as the Rams OC.

The 12th pick in this year’s draft is a great spot to be at for the Vikings most pressing need: offensive line. As of now, they are planning to run back four out of five starters on the o-line. The current mood (and actions) seems to be that Mike Zimmer was the problem in 2021. There are very few teams in the NFL that have spent more draft capital on the offensive line than the Vikings who have selected five different players in the first two nights of the draft since 2018. Knowing this, it’s possible that Adofo-Mensah will not go in that direction again, instead choosing to act in the opposite manner of the previous regime. Then again, Rick Spielman is responsible for drafting some of the brightest stars on the current Minnesota roster.

Adofo-Mensah is one of the sharpest minds in football. He gets full credit for the Vikings’ offseason. Now they have the flexibility to go in any direction positionally. Still, CB has some elite options in this draft. CB is the pressing area of need in the near future to replace Peterson in 2023. Re-signing Patrick Peterson helps preserve CB for one more season. Sauce Gardner from Cincinnati has more hype right now than Eminem’s hype man in 8 Mile. It’s unlikely Gardner falls to 12, but there’s nothing wrong with taking Derek Stingley Jr.

My bozo Lions have a strange feel to them right now. I can’t quite place it. They aren’t bringing in a new regime nor do they feel totally rudderless without a clue. It’s an uncomfortable feeling as a Lions supporter to feel the buy-in happening in real-time. The D.J. Chark signing alone is a move that previous Lions staffs simply would not have made.  There are clearly still plenty of improvements to be made, but the Lions have a vibe that is starting to secure support from those of us in Detroit who have been burned so much by an absolute joke of a franchise that gave Matt Millen eight seasons to waste away an entire decade.

Detroit has two first-rounders in the 2022 draft (2nd, 32nd). The Lions have shown tremendous patience in an era that demands everything be on tap in an instant. The Jared Goff era will be seen as the period of time when Lions fans had to wait out their punishment from the football gods for being unable to build a title contender around Matthew Stafford. Goff has NO future with this team. That means there is an absolute imperative to draft a QB who could compete for the job in 2023. Malik Willis from Liberty could be had at the second pick. He is oozing with talent and has all the tools to be a stat stuffer in the NFL. Tim Boyle and David Blough are the backup QBs on the roster but have little to no future either. The Lions could wait until their 32nd pick or later to snag an underappreciated player like Matt Corral or Sam Howell.

Most by an FBS QB 🎯pic.twitter.com/04Axo7d2oL

The defense played hard last year, but they were just so thin with talent because of the absolute disaster that former arrogant know-it-all general manager Bob Quinn left the team with in a desperate attempt to save his job. Never let desperate people terrified of being fired run your team’s draft. Just fire them first so the right pick for the future of the team can be made (it’s not your fault Jeff Okudah). Local University of Michigan stud Aidan Hutchinson has all the stars aligned for him to be selected second overall. He even played high school ball locally in the Detroit area. Detroit has solid pieces though on the edge with Romeo Okwara and Charles Harris. Okwara was outstanding in 2020 with 10 sacks but was limited by injuries in 2021. There are major needs within the interior defensive line as well and Hutchinson showed the flexibility to move all over the line in college. Detroit needs more depth so expect them to fill more holes along the defensive side of the ball because they have a solid foundation of skill players offensively.

The Bears are free and clear of the Ryan Pace and Matt Nagy era that will forever be associated with trading up to get QB Mitch Trubisky. They left no first-round pick in the coffers this year for new head coach Matt Eberflus who comes over from Indy to join first-time general manager Ryan Poles. Poles was involved in drafting Patrick Mahomes for the Chiefs. and now he has the pleasure of building around Justin Fields. Having a new GM who picked his own head coach is a bonus for the Bears. All sectors of the Bears should be aligned towards the same path in 2022.

Ryan Poles stated that the Bears would build through the draft while being selective in free agency. Bringing in Byron Pringle from Kansas City helps ease the pain of losing Jakeem Grant, who flashed big-play potential in the second half of 2021. Former NFC North foe Equanimeous St. Brown will now line up wide with Pringle and Darnell Mooney. That pretty much rounds out the WR depth of note. This screams need in a big way. Darnell Mooney could be the go-to wideout in 2022. He might be better served on the inside instead of lining up wide. In the slot, Mooney can find more spots to expose in opposing defenses. That’s why WR may be the biggest need for the Bears heading into the draft.

Just get the ball in the hands of Christian Watson.

With no first round pick, Poles and company will have to shore up the offensive line with shrewd selections at pick 39 or later. Justin Fields was sacked 36 times in 12 games played. It’s not David Carr level scary, but even Poles stated that the offensive line needs an overhaul. The Bears will be implementing a zone blocking scheme this year. Bringing in linemen Lucas Patrick and Dakota Dozier is a start, but there are a lot of changes needed not only with the personnel, but with how nutrition and strength training are conducted.