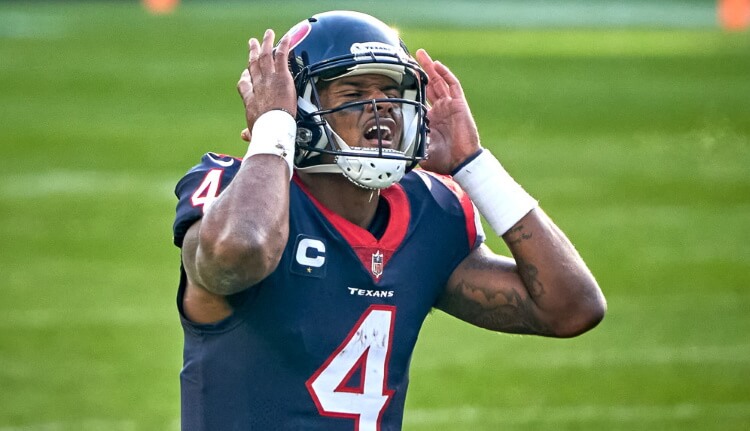 Following a very busy free agency period for most teams, there are many new faces in new places. Deshaun Watson has found himself back in the spotlight, after being traded to the Cleveland Browns and signing a record-breaking $230M fully guaranteed contract. The other Ohio squad responded by building a wall around Joe Burrow that even Donald Trump would be proud of. In other news, the Pittsburgh Steelers slapped some Flex Seal on their leaky offense by signing Mitchell Trubisky to be their signal-caller for at least this one season. All the while, the Ravens are looking to avoid a complete overhaul on defense. Now that the NFL draft is right around the corner, it is time to recap how active each AFC North team was in filling positional needs and we’ll determine how they can improve in the draft.

Lamar Jackson has not taken a snap since Dec. 12, 2021, when the Ravens’ QB injured his ankle in a 24-22 loss to the Browns. Most Baltimore fans have rightfully blamed this injury on bad offensive line play. It’s not an exaggeration to say that the entire Ravens’ offense revolves around Lamar Jackson, which should make protecting him a top priority. To make matters worse, freshly acquired LT, Alejandro Villanueva, has retired following a sub-par season by his standards. The team quickly signed the versatile RT, Morgan Moses to anchor an offensive line in need of improvement.

On the other side of the ball, the Ravens were unable to get much pressure on the opposing team’s QB. They were this close to landing an elite pass rusher in OLB Za’Darius Smith, who backed out of his contract. Smith reportedly reneged on the 4-year $35M deal after Von Miller and Chandler Jones’ contract details became public. The OLB reportedly submitted a revised offer, which was also accepted. But then, to the surprise of everyone involved, he submitted a subsequent offer, which was declined by the team, and that was that. Thankfully, the Ravens currently have the most picks (9) in the first four rounds, the most in team history. With the additions of FS Marcus Williams and DT Michael Pierce, the team should now be able to draft the best available player at pick 14.

The 2022 offensive line NFL draft class is mighty deep. Because of this depth, the Ravens could choose to focus their 1st round pick on bolstering their pass rush. Georgia edge defender Travon Walker should be atop the Ravens’ draft board. Walker enjoyed a great NFL combine that magnified a stellar 2021 season in which he recorded 19 solo tackles and 6 sacks. The injuries of Marlon Humphrey and Marcus Peters absolutely decimated the secondary in the final half of the season. Therefore, it must also be noted that this team is in serious need of CB depth.

The last play of Super Bowl LVI is still fresh in the minds of Cincinnati fans. Long gone is the “Bengals are cheap” narrative (Sorry Carson Palmer). The team spared no expense this off-season to protect their franchise quarterback. It’s a very clear message the Bengals are sending to the rest of the league that they are all-in on a possible return to the Super Bowl. The signings of La’el Collins, Alex Cappa, and Ted Karras put the cardiac cats in the perfect position to address the defensive side of the ball in the NFL draft.

Cincinnati is in desperate need of a cornerback to put across from Chidobe Awuzie and slot corner Mike Hilton. It was an apple that got Adam and Eve booted out of the Garden of Eden. It so happened to be an Apple that gave up two scores to Cooper Kupp in the Super Bowl. The Bengals will likely take this lesson from the good book and look to replace Eli Apple on the outside with a higher upside rookie. So far the Bengals have taken an all-in approach to the off-season. Look for the Bengals to address this need with their first pick. A few names that could be called are Florida’s Kaiir Elam, Clemson’s Andrew Booth Jr., and Michigan’s Daxton Hill.

The Cincinnati Bengals allowed the seventh-fewest rushing yards per game with 103.2. This is night and day compared to the 148 yards allowed in 2020, which ranked 29th in NFL. The biggest contributions on defense have come from the edge pressure provided by Trey Hendrickson and Sam Hubbard, along with the hole-clogging duo of BJ Hill and DJ Reader. Logan Wilson stepped up in a big way his sophomore season combining for 100 tackles. However, he is a much better coverage linebacker. The Bengals could benefit from adding a run stopper to the mix. Wyoming inside linebacker, Chad Muma feels like the perfect fit. He recorded a whopping 85 solo tackles, combining for 142. The Wyoming product rarely misses a tackle; if he touches you, you’re going down. Adding an enforcer in the second round would make this team extremely difficult to run against.

The Browns got their QB and they got an earful in the process. The Cleveland fanbase it literally divided. One half retains that this sport is a business first and foremost, while the other half’s moral compass points in a different direction. Whichever side you belong to, the fact remains that this is a team in need of more than just a new quarterback.

There is a need at the wide receiver position. But seeing as the Browns don’t have a first-round pick in the NFL draft, they made address a different need at pick #44. The logic here is that because Watson is so talented, he should be able to mold a 3rd or 4th round WR into an early producer on offense. Because of this luxury, the Browns would be wise to upgrade their defensive line. Miles Garrett is great, but he can’t do it all by himself. Oklahoma edge rusher, Nick Bonitto could be just the guy to pair with Miles. Bonitto had 19.5 sacks across four seasons with the Sooners, tacking on seven in 2021.

The addition of Amari Cooper only does so much to mask the departure of Jarvis Landry. Cooper has a history of in-season injuries and can not be counted on to play a full 17 games. But you can count on the Browns selecting a receiver in the draft, maybe even landing a steal in a guy like John Metchie III or Calvin Austin III.

#Browns Fans: Are you willing to root for Deshaun Watson?

The Pittsburgh Steelers have the advantage of having a coach in Mike Tomlin, who managed to keep a deteriorating roster competitive during a rough year. He was able to make coaching adjustments to play to his player’s strengths and opponent’s weaknesses. One example of this was the fact that Big Ben was tops in the league in terms of release time. In fact, Roethlisberger had the fastest release time of any NFL quarterback in 2018 and 2020. This past season the offensive line was so horrendous that had he held on to the ball a millisecond longer, he would have been sacked.

With Ben driving off into the sunset, and Mitch Trubisky taking over, the Steelers will no doubt be taking a hard look at the position in this year’s NFL draft. There is no way you can convince me that the six-time Super Bowl Champion Steelers are satisfied with having Trubisky as their signal-caller of the future. We could very easily be looking at the next home for Liberty QB, Malik Willis. Malik’s big arm could feed WRs Chase Claypool and Diontae Johnson. His legs could further open up the playbook for Tomlin and the offensive coordinator.

Protecting this investment would need to be an immediate priority for the team. It would be a shame to see their top pick go down his rookie season (like Joe Burrow) and have to resort back to lesser QB play. Thankfully, this is a deep offensive line draft, and there should be NFL-ready talent available at pick 52. A couple of names that stand out are Washington State’s Abraham Lucas and Memphis’ Dylan Parham.

Fantrax was one of the fastest-growing fantasy sites over the last few years, and we’re not stopping now. We are the most customizable, easy-to-use, and feature-rich platform in the industry, offering the greatest fantasy experience for your dynasty, keeper, redraft, and best ball leagues. Fantasy sports doesn’t sleep, and neither does Fantrax, with seasons running 365 days a year. Take your fantasy leagues to the next level now at Fantrax.com!
2022 NFL Draft
Share