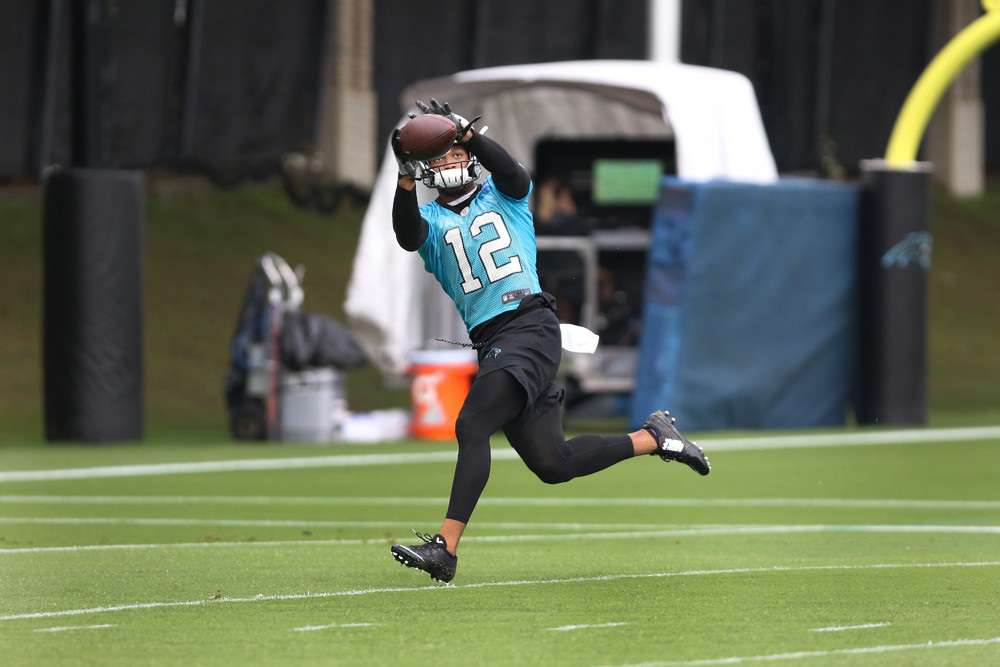 This past week in NFC training camp has been all about rookies trying to make a mark. Wide receivers D.J Moore and Michael Gallup have shown off the talent that got them drafted, while rookie running backs like Rashaad Penny continue to play catchup in their position battles. Unfortunately, the past week has also been about injuries. The Minnesota Vikings have seen over 50 percent of their offensive line go down, while the 49ers are running out of players in their backfield.

I’ll be taking a close look every week during the preseason at the latest news and how it impacts fantasy football. You can look for updates on the NFC every Tuesday while taking a look at the AFC training camps on Fridays. So without further ado, let’s dive into what happened recently in NFC training camp.

Rookie wide receiver Michael Gallup is listed as a backup on the Cowboys’  depth chart. Allen Hurns, Cole Beasley, and Terrance Williams are listed as the starters which is a head-scratcher. Gallup caught one pass for 30 yards in his preseason debut for a touchdown. The 22-year-old third-rounder is, to the naked eye, easily the most talented receiver Dallas has on the roster. It is only a matter of time before he passes his veteran teammates.

Michael Gallup’s first catch (preseason) as a member of the Cowboys.

Saquon Barkley has been sidelined with a “mild strain according to Giants head coach Pat Shurmur. All signs point to the rookie running back being fine. However, fantasy owners are nervous considering that after Derrius Guice was “fine” he ended up needing season-ending knee surgery. Expect the Giants to limit Barkley’s preseason exposure going forward. They have a star and they know it.

Eagles wideout Alshon Jeffery could begin the season on the PUP list, as he recovers from shoulder surgery. This would be tough news as the designation would cost him an automatic six games. Jeffery was originally expected to be sidelined for six months when he underwent rotator cuff surgery, but he was never expected to land on the PUP list.

As #Eagles gear up for the season, WR Alshon Jeffery has remained on PUP. Though he’s progressing according to plan, sources say the timing of his rotator cuff surgery — following the Super Bowl win – means there’s a chance he may not be ready for the opener. Could stay on PUP.

If Jeffrey were to miss time it would give a large boost to Mike Wallace’s fantasy value, along with rookie tight-end Dallas Goedart. The Eagles have been expected to take advantage of two wide receiver sets, and losing Jeffrey would give them a big reason to use Goedart to their advantage.

Redskins coach Jay Gruden doesn’t expect to add a running back with Derrius Guice (ACL) out for the season.  Sorry to those who were holding DeMarco Murray in fantasy “just in case.” However, this is great news for Samaje Perine and Rob Kelley, who stand to gain a large amount of value. Savvy fantasy owners would be wise to avoid the situation altogether, aside from a slight boost to PPR weapon Chris Thompson.

Bears rookie wide receiver Anthony Miller looks to be locked into the starting slot position. Miller has shown superior route-running ability so far in training camp, along with strong hands and confidence. The Chicago wideout is a nice late-round target with tremendous upside in Matt Nagy’s offense.

Speaking of Bears coach Matt Nagy, he went out of his way to claim that tight-end Adam Shaheen will “be a big part of this offense.” I can hear the groans from here, Trey Burton owners.  Shaheen got the start in the second preseason game, catching three passes for 53 yards. Fantasy owners should not be too worried, as Trey Burton does, in fact, have this job locked down. It is an interesting thing to keep an eye on though.

Detroit rookie Kerryon Johnson rushed for 34 yards on seven carries, along with four catches for 33 yards in Friday’s preseason game. The first-year running back looked impressive, and easily stood out as the premier offensive player on the field. The highlight came on a 57-yard run that ended up being called back due to a holding penalty.

Johnson has playmaking abilities that LeGarrette Blount simply does not possess and should get an opportunity to shine in a weak Lions backfield. Be warned, fantasy owners should expect a bit of annoyance when drafting the rookie. Johnson is likely to lose some goal-line work to Blount while ceding some third-down opportunities to Theo Riddick early in the season.

The interesting news out of Packers camp has to do with wideout Jake Kumerow. After catching major praise from Aaron Rodgers during camp, Kumerow went out and caught 3-of-7 targets for 76 yards and a touchdown in the Packers’ preseason opener. One of the passes was a 52-yard sideline pass that was caught in stride by the undrafted free agent. Kumerow is not currently worthy of fantasy consideration, but if you receive praise from Rodgers and follow it up with a clutch performance, people are going to notice. Keep an eye on this guy. If Rodgers likes him, fantasy owners may need to also.

The most important fantasy news out of Vikings training camp has to do with their offensive line. Minnesota tackle Rashod Hill returned to practice Monday after being carted off the field earlier in the day. I’m not sure what happened there exactly but it is great news for the Vikings. Center Nick Easton is already out for the season with a neck injury, while right guard Mike Remmers missed two weeks as well. Dalvin Cook and Kirk Cousins need a healthy offensive line to reach their full potential. Let’s hope that they can stay healthy.

Falcons rookie wideout Calvin Ridley Ridley returned to practice Sunday after being removed from Saturday’s practice with a hamstring injury. Luckily, the injury turned out to be minor. It is expected that Ridley will start on the outside opposite Julio Jones while veteran Mohammed Sanu mans the middle of the field.

D.J. Moore is looking like the real WR1 in Carolina, and not Devin Funchess. Moore caught four passes for 75 yards in the Panthers’ preseason opener. The highlight of the game may have been a cross route that had Morre juking and missing tackles. The kid can play, and he needs to move up your draft board. He will be competing for targets with Funchess, Torrey Smith, and Greg Olsen. Let’s hope Cam Newton understands what a dangerous weapon he has.

Speaking of Greg Olsen, the veteran tight end has had no hiccups in training camp and has been running seamlessly. Olsen had his 2017 season ruined by a foot injury and could be due for a big bounce-back campaign.

The battle between rookie wideout Tre’Quan Smith and Cameron Meredith to be the starting slot receiver is closer than many expected. Meredith avoided the PUP list but is still recovering from knee surgery. Although the veteran is rounding into shape, Smith is having a fantastic camp and is pushing hard for playing time.

Tampa Bay coach Dirk Koetter stated that Peyton Barber “is our starter.” This may be easy to dismiss as “noise”, but after Barber started and played all but one snap with the first-team offense in the preseason opener, it’s hard not to take it seriously. Rookie running back Ronald Jones, who has struggled to pick up the passing game so far in camp, played one down with the first-team offense and dropped a pass.

Reality check for fantasy owners. Peyton Barber is still an undrafted free agent who does not have half the talent of Jones. Even though the comments of coach Koetter cannot be dismissed, they can also not be taken seriously. It would be hard to imagine Ronald Jones Jr not taking over as the starting running back, but fantasy owners will need to slide him down their draft boards. The lesson here is, do not buy into the Barber hype. Opportunity is not all of a sudden going to turn him into a solid running back.

Cardinals quarterback Josh Rosen will play with the first-team offense in Friday’s preseason game versus the Saints. Veteran Sam Bradford is still going to get his time, but Arizona coach Steve Wilks is going to give the rookie a chance to play with the starters. Rosen struggled is his first preseason experience with the backup offensive line. Let’s see how he does with Larry Fitzgerald and company on the field with him.

Reports out of Rams training camp suggest that a strong rapport has been formed between quarterback Jared Goff and Cooper Kupp. 2018 could be a huge season for Goff and the Rams offense. Cupp led LA in targets as a rookie, but he will need to compete with both newly acquired Brandin Cooks and Robert Woods this year. If fantasy owners have to back one horse in the race, Kupp is where the smart money is.

After losing running back Matt Breida for the preseason with a shoulder injury, the 49ers received good news when Jerick McKinnon’s MRI revealed only a muscle strain. There is no timetable for how long McKinnon will be sidelined, but this would have been a devastating blow to San Francisco if McKinnon were forced to miss significant time with a knee injury. It would not be a surprise for McKinnon to be sidelined for some time to be cautious.

The 49ers have signed running back Alfred Morris as an insurance policy.

Seahawks offensive coordinator Brian Schottenheimer stated that rookie running back Rashaad Penny is showing improvement in pass protection. This is fantastic news for those hoping for Penny to take the starting job at some point. Everyone knows that Penny is the superior talent over teammate Chris Carson, but sometimes these things matter more to coaches. If Penny can continue to pick up the blitz and protect the quarterback, Pete Carroll will feel more comfortable with the rookie running with the first-team offense. This situation is one of the most important postion battles to follow in fantasy football.