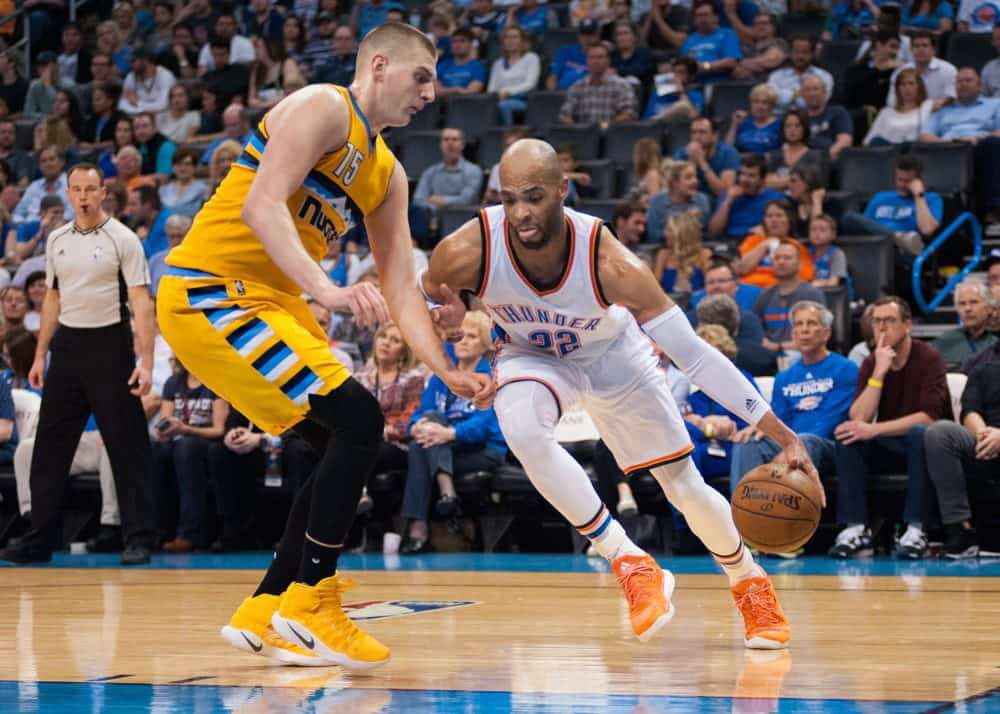 Merry Christmas everyone! This is one of the most fascinating slates of the season. We have five highlight games spread all throughout the day and it gives us some monster prize pools with the NBA on full display. Like usual, we’re going to keep all of our recommendations below $10,000 and that’s going to be especially tough here with so many big names playing on Christmas Day. Without further ado, let’s go ahead and get into our 12/25 NBA DFS plays!

Everyone is talking about the ridiculous statistics from James Harden and rightfully so, but Westbrook is quietly in the midst of a monster stretch himself. Not only has he scored at least 40 DraftKings points in 10-straight games, he’s also averaging 51 DK points per game in that span while posting a 32 percent usage rate. That’s the Westbrook that we loved in his OKC days and it’s becoming clear that he’s starting to get more comfortable in this system, averaging 23 shots a game in that span too. Getting to face Golden State isn’t too shabby either, with the Warriors sitting 23rd in defensive efficiency.

Since Eric Bledsoe went down, Hill has established himself as the team’s go-to point guard. While he hasn’t necessarily been starting, he is still averaging 24 DK points across 23 minutes a game over his last six fixtures. He’s actually had limited minutes in some blowouts in that span and he could see 25-30 minutes here in a game that could have a playoff atmosphere. Another cheap point guard we like is Lonzo Ball below $5,000, as he recaptured the starting role in the last Pelicans win and stuffs the stat sheet at ease.

Russell’s price has dropped $900 over the last two games and it makes absolutely no sense. We’re talking about a guy who’s scored at least 42 DK points in three-straight games and is posting some monster usage right now. In fact, Russell is averaging over 20 shots and a 33 percent usage rate in that span. That’s really no surprise with all of the weapons injured in Golden State and he should continue to be the focal point of this offense. Getting to face Houston is the icing on the cake, with the Rockets owning a 25th OPRK against opposing PGs while sitting third in pace.

While this DraftKings price has gotten to where it should be, Lee remains a fantastic value on FanDuel. The guy who’s really taken notice of Lee’s breakout is Steve Kerr and that’s the most important aspect of this recommendation. That’s why he’s started in four-straight games, averaging 26 FanDuel points per game over his last six fixtures. That’s 6X value at this dirt-cheap price tag and he makes it so much easier to get studs like LeBron James, James Harden, and Giannis Antetokounmpo into your lineup. Not to mention, he faces a Houston club who surrenders the most fantasy points in the league to opposing shooting guards this season.

Most people are going to pivot to Kawhi, James and Giannis at small forward but Middleton is a great player to pay down for. After getting off to a slow start, Middleton has been superb since his return from injury. In fact, Middleton is averaging 34 DK points per game across just 28 minutes of action over his last 11 fixtures. Those 28 minutes are likely going to rise closer to 32-35 with Middleton getting healthier and blowouts are the only thing that’s kept it so low. That’s probably not going to be the case here, as Middleton would be averaging over 40 DK points per game in the 35 minutes that we’re projecting here.

House is easily one of the best values on the board. Paying $3,600 on DraftKings is truly absurd for a player like this and the $4,600 price tag on FD isn’t too bad either. We’re talking about a guy who’s already averaging 22 DK points per game for the year, which alone is north of 6X value. What makes him so reliable is his role, playing over 30 minutes a game this season while taking 5.4 three-pointers per game. The matchup might be the best part of this play though, with the Rockets projected for over 123 points here.

With Marc Gasol and Pascal Siakam injured, Ibaka is playing some of the best basketball of his career. That will be the case when you’re slung into a premier role but Ibaka is showing that he’s comfortable taking on that bigger workload. That’s evident by the fact that he has at least 38 DK points in three of the first four games without them, playing over 36 minutes in those three fixtures. The simple fact is, they have very little else in their frontcourt and he should be a near guarantee for 35-plus minutes here in a competitive game with a 2.5-point spread. Not to mention, Boston’s biggest weakness is their frontcourt with guys like Enes Kanter and Daniel Theis.

Favors price is creeping up to where it should be but we’re going to keep riding him until he gets above $6,000. Injuries and family matters have limited his minutes all season long but Favors has proven to be a monster in those limited minutes. In fact, he’s currently averaging 25 DK points per game in 21.3 minutes of action. The fact that he played 30 minutes in the most recent game indicates that he’s getting close to having that minute’s restriction lifted, as his average equates to nearly 40 DK points per game if he averaged 30 minutes. That’s monstrous at $5,700 and that means a rise in price is inevitable.

With so many studs on this slate, Jokic is easily the best play below $10,000. What we love is his recent form, scoring at least 37 DK points in 10-straight games averaging 49 DraftKings points per game in that span. In fact, he’s averaging 22.2 points, 10 rebounds and 8.1 assists per game in that stretch. That’s the stud we’ve been waiting for and we absolutely love those type of numbers against a Pelicans team who sits 25th in defensive efficiency and 28th in points allowed.

Lopez is just too cheap for someone of his abilities. This is a dude who’s flirted with 40-point averages in the past and is averaging over 25 DK points per game this year. He’s actually been much better since Bledsoe went down, scoring at least 31 fantasy points in three-straight games while averaging 35 DK points per game in that stretch. That’s 7X value on its own and he should see some extra minutes in this showcase game.