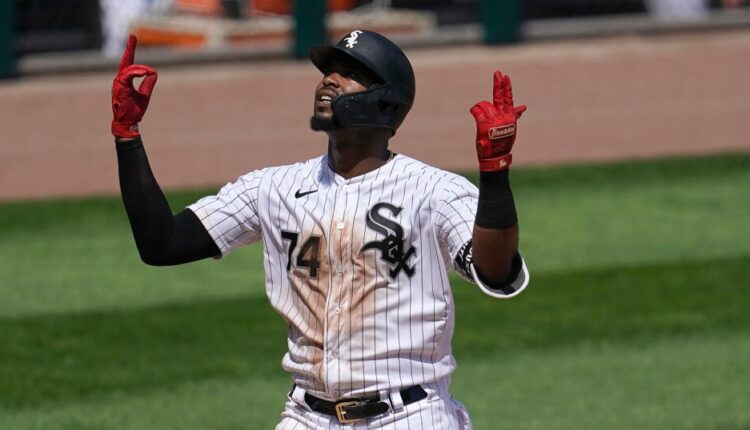 The Return of Eloy Jimenez

Some see Eloy Jimenez as a young superstar who has yet to achieve his full potential. Others see the 6’4” 240 lb. outfielder as a constant source of injury risk and headache. Whatever your opinion on the polarizing young power hitter, the Chicago White Sox will see him return to their lineup at some point this week.

Eloy has gone through his share of hype and success, ranking as the 4th overall prospect in Major League Baseball in 2018, behind only three of the most valuable players in the game today, Shohei Ohtani, Ronald Acuna Jr., and Vlad Guerrero Jr. He’s also seen success at the Major League level. In 177 games between 2019 and 2020, Jimenez placed 4th in rookie of the year voting and won a silver slugger award in 2020. His combined slash-line from those two seasons was impressive, .276/.321/.527. He belted 45 home runs, and drove in 120. Going into 2021, Jimenez was one of the most sought-after commodities in dynasty fantasy baseball.

In March of 2021, Eloy tore his left pectoral muscle while trying to rob a home run in spring training. He was able to return late in the season but did not resemble his former self at the plate. 2022 started slow for Eloy as well. Any momentum he may have had was slowed to a halt after tearing a hamstring tendon in his right leg just 11 games into the young season.

Today we will discuss the implications of this hamstring tear and how it may affect the right-hander’s swing and ability to play the field.

The Hamstring and How it Affects a Swing

I can tell you from personal experience that hamstring tears are awful. They make running feel like a game of Russian roulette and they deplete your swing of power and explosiveness. For a hitter, the back hamstring- or the right hamstring for a right-handed hitter and vice versa- is more crucial to the ability to swing with authority. In order to transfer the momentum from the back foot, a hitter must provide enough contractile force in the hamstring to overpower the quadriceps and bend the knee. This is ultimately a simplified explanation for the job of this muscle. To further, and more comprehensively examine the responsibilities of the hamstring, let’s break down the swing a bit more.

A right-handed hitter begins their swing by weight shifting onto their back foot, which ultimately allows for more drive into the ground via the right foot. Whether a hitter has a large leg kick, or an Albert Pujols foot turn, the back leg then must perform a complicated combination of contractions to stabilize the lower half and return the momentum back towards the incoming ball. The muscles of the ankle, the calf complex, hamstrings and quads (among other muscles) must co-contract with the perfect recipe of tensile strength to allow a hitter to reach the desired position.

When the hamstring is injured, or malfunctioning in any way, this process becomes hindered, and oftentimes, painful. The hitter goes into each swing with a doubt in their mind, that the hamstring muscle will be able to support the aggressive nature of the swing. Oftentimes, this doubt results in compensation of the swing mechanics or further injury.

Eloy Jimenez is reportedly fully-healed, and even after a June setback, is ready to take the field at 100%. He struggled initially in his AAA rehab assignment, but that wasn’t exactly shocking for a man that has only had 258 MiLB and MLB combined at-bats since 2020. Regardless, an OPS of .668 at the AAA level isn’t getting the hype train rolling.

A precursor to the following is that it will surely take Eloy some time to shake off the rust, but here are a few things to look out for.

What I will be watching for in Eloy’s next month or so of at-bats is the level of his back knee compared to previous years at the point of contact (POC). This can be difficult to do from the standard at-bat view, but usually, replays show a useful side angle. I believe this can be extremely helpful in determining how Eloy feels at the plate. If the height of his back knee is higher than in previous years, or generally inconsistent, it’s possible this is the result of a weak or painful right hamstring that is not, in fact, 100%. Timing also affects this positioning, so if the back knee height stabilizes at POC to previous heights over the course of the next month, we can be more confident it was more related to shaking off the inevitable rust.

The metric that will be easier to track via Statcast data is his launch angle. I will be looking, not so much at the average angle, but the range of the angles. If a hitter is unable to engage the back leg with authority, it may be challenging for them to reach a consistent position at the point of contact. It will be inconsistent, causing a lot of batted balls straight into the ground, or popped straight up. Ultimately, if Eloy is producing a high number of ground balls with weak contact, or infield fly balls, or both, I will be much more pessimistic about his success this season. That is going to tell me he is experiencing inconsistencies in his swing related either to rust, or to incomplete healing of the hamstring.

Eloy Jimenez is one of the most talented hitters in the game today, and you will agree with me if you allow your memory to expand past the last two seasons. Patience is the name of the game with Eloy. I do not expect him to come back firing on all cylinders this season. He is still just over a year removed from a gruesome chest injury, as mentioned previously. 2022 for Eloy Jimenez mirrors that of the team he plays for. To this point in time, their collective production has been not just underwhelming, but disappointing. Both parties will use the rest of 2022 to see what type of momentum can be created towards the 2023 season, or the ‘22 playoffs if they can hit their stride.

If Eloy can remain healthy for the remainder of this season, and his launch angle and knee height ultimately normalize and look like 2019-2020, there is significant reason for hope. I would look to trade for the slugger this offseason, no matter what his stats looked like by the end of 2022. Until that happens, I’m not going after Eloy unless you can acquire him for a steep discount. Managers who have held on to him for this long, however, may not be so keen to deal him at that price point.