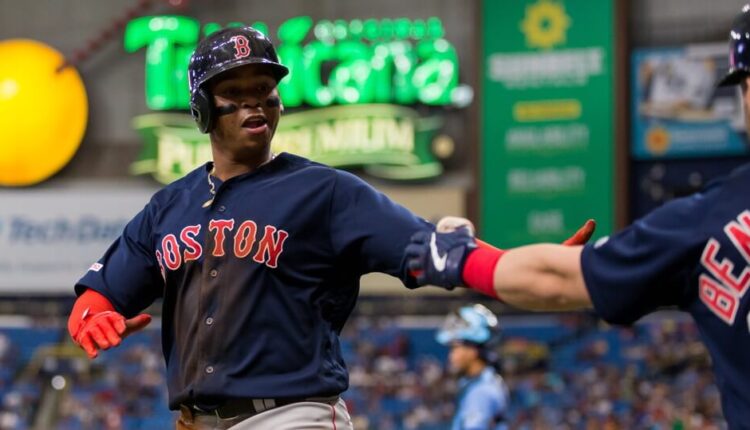 You can see, we have Great American Ballpark, Fenway Park, and Angel Stadium in Los Angeles that all host elite hitting environments. There are also plenty of pitching-friendly options over the weekend. More on that in the Ballparks section of this column. 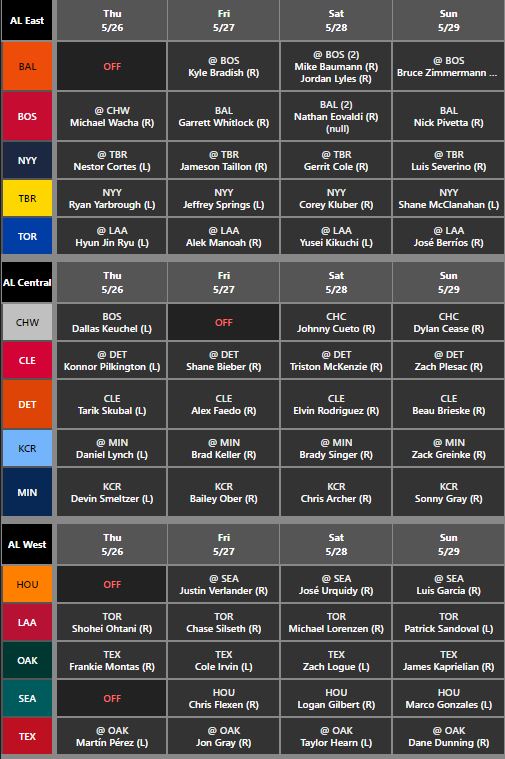 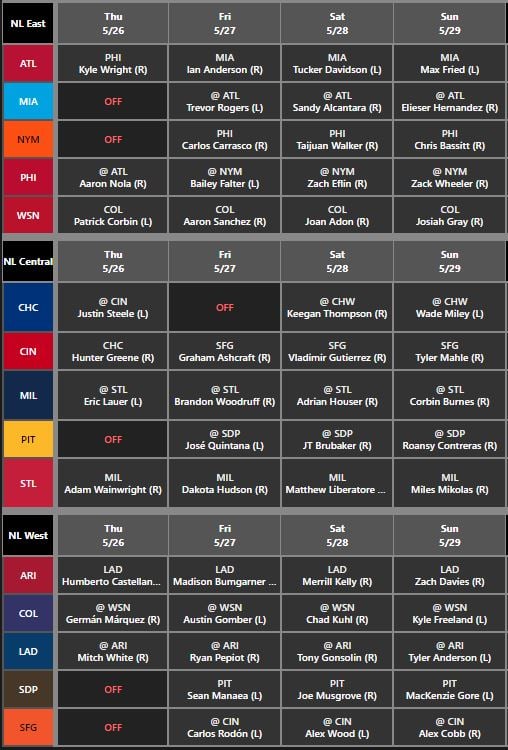 Presently, there does not appear to be much in the way of rain that would interrupt our DFS plans. There does appear to be the possibility of heavy wind on the East Coast for Friday’s games. The direction and speed of those winds might play a pivotal role in who we play in those parks.

San Francisco Giants (@ CIN) – As you can see above, in the latest Baseball Savant ballpark factor update, Great American Ballpark passed Coors Field for the friendliest offensive environment for the last three seasons. A couple of factors are clearly in play here. First, is the ballpark. It’s a bandbox that turns normal fly balls into home runs. Second, is the horrendous Cincinnati pitching staff. Over the weekend, the Reds will start Vladimir Gutierrez on Saturday and Tyler Mahle on Sunday. Those two have the worst and six-worst ERA, respectively, among all pitchers with at least 30 innings this year. Someone named Graham Ashcraft will start Friday. All you know is he has thrown a total of 4.1 major league innings and will quickly give way to the Reds’ bullpen. That would be the Reds’ bullpen with the third-worst ERA among all teams this year. For a patient, contact-driven team like the Giants, this is an ideal spot for their lineup which won’t cost an arm and a leg this weekend.

Boston Red Sox (vs. BAL) – The Red Sox are absolutely smashing their opponents right now, with runs of 6, 7, 8, 16, and 16 in games over the last week. Trevor Story and Rafael Devers look like MVP candidates over the last 10 days and it seems like no one can get them out, especially at home. Enter the Baltimore pitching staff to Boston. The ERA for their starters this year is 4.60, sixth-worst in baseball. Over the four games they will play this weekend, three right-handers will start in a park that allows the second-highest offensive park factor, run environment, and doubles to left-handed batters. Players like Devers and Alex Verdugo are going to come with a hefty Orioles tax this weekend, but they belong in your lineups as one-offs or as Boston stacks.

Houston Astros (@ SEA) – Somehow, someway, the Houston Astros keep on finding a way to put up elite pitching numbers year after year. No Lance McCullers and Jake Odorizzi due to injury right now? No problem, we will just slot in Cristian Javier who will strike out nine guys every game. This weekend, the Astros will start Cy Young favorite Justin Verlander, Jose Urquidy, and Luis Garcia in Seattle against a struggling Mariners offense. In the last two weeks, Seattle’s team .244 batting average ranks 18th and their .390 slugging percentage is just 19th. Julio Rodriguez is heating up faster than the Houston weather, but he is about the only person you fear right now. Verlander is the highest-priced pitcher on all sites on Friday but matched up against Chris Flexen, you are inching must closer to a win and he has less than 22 fantasy points only twice in his last seven starts.

Cleveland Guardians (@ DET) – Speaking of offenses that are struggling, the Detroit Tigers, ladies and gentlemen. Yikes. In the month of May, they have the worst walk rate and on-base percentage, and the second-worst slugging percentage in the league. They strike out over 24% of the time this month (eighth-most) and have scored 14 fewer runs than any other major league team in May. The Tigers will get the tough stretch of the Guardians rotation the next three days with Shane Bieber, Triston McKenzie, and Zach Plesac toeing the rubber in Detroit. Making matters worse for the Tigers, Comerica Park is now ranked as the worst overall park for home runs over the last three years, according to Baseball Savant. They allow 6% fewer home runs than even the Oakland Coliseum in that span. This is a great week to spend for the Cleveland pitchers, but it shouldn’t break the bank. Bieber is just the eighth-most expensive pitcher on the slate on DraftKings on Friday.

Luis Arraez (1B, MIN) – Not often do we look at a one-home run guy as a must-have in DFS, but for safe points game in and game out, Arraez is about as safe as you can get right now. He is fourth in batting average and first in on-base percentage this year. He has multiple hits in five of his last seven games and has scored 10 runs. But the most important thing about this weekend for Arraez is he will face three soft-tossing righties when the Kansas City Royals come to town. He absolutely destroys righties to the tune of .380/.477/.467 this year. Think about that. He is getting on base about half the time he faces a right-hander. With only Sonny Gray, Chris Archer, and Zach Greinke as his obstacles to getting on base this weekend, this should be a huge series for Arraez.

Dane Dunning (SP, TEX) – Dunning doesn’t usually stand out as a strong pitching option on most slates when he is available, but it’s not often he is facing the Athletics in the Oakland Coliseum. It’s about the best matchup a pitcher can have this season, and for just $7,300 on DraftKings, that could be a steal for your SP2 slot. On the year, Dunning carries a 9.18 K/9 rate and he has more strikeouts than innings pitched in each of his last three starts. Even for a low-velocity pitcher, Dunning should be able to avoid trouble against this team. Oakland has the fifth-highest strikeout rate in the league this season (24.4%) and the fourth-lowest walk rate (7.3%). But what makes Dunning look the most impressive this weekend is how bad Oakland is against right-handed pitching. They rank 30th in average and on-base percentage and 29th in slugging against righties. All this adds up to the price being right on Dunning this Sunday.