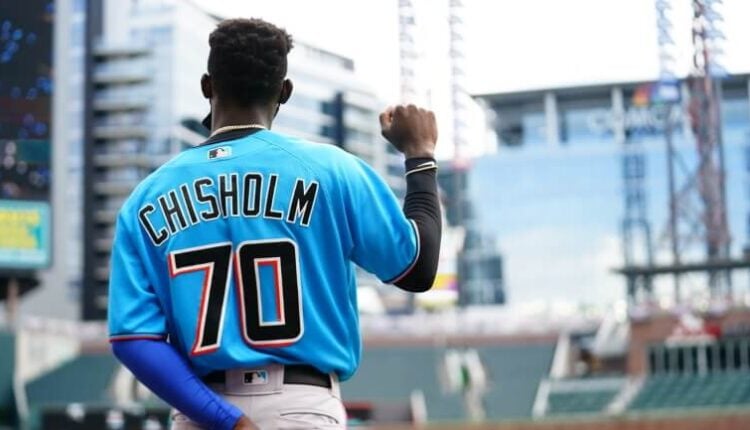 The “Probable Pitchers” grid at Fangraphs is always a fantastic resource for looking ahead at the MLB schedule. Here is the weekend at a glance. As we will look at in the Weather section, below, just about all of games should see good baseball conditions during the holiday weekend.

You can see, we have Great American Ballpark, Truist Park, and Yankee Stadium in play this weekend, which gives an advantage to certain types of hitters. More on that in the Ballparks section of this column.

Presently, there are rain chances in Detroit and Minnesota early in the weekend. But things look mostly clear as we head into Sunday. Wind looks like it won’t be a problem either this weekend.

However, with only four series happening this weekend in stadiums that have a roof, it will be important to monitor those conditions as the weekend progresses.

St. Louis Cardinals (@ CIN) – Before an unusual shutout against Miami on Thursday, St. Louis has been absolutely mashing the ball this year, and you may not have noticed yet. They rank top-seven in home runs, slugging percentage, wOBA, wRC+, and rank 11th in walk rate. And that’s with playing half of their first 12 games at home where they play in the 28th-ranked ballpark for offensive park factor. Now they get a massive field upgrade to Great American Ballpark and some fascinating matchups with Reds’ pitchers. The bats of players like Nolen Arenado, Paul Goldschmidt, Tommy Edman, and Tyler O’Neill against young fireballers like Nick Lodolo and Hunter Greene should be must-see TV.

Atlanta Braves (vs. MIA) – The Braves get to continue to enjoy some home cooking and the friendly offensive confines of their ballpark this weekend. In the process, they will match up with a series of some of the most confounding and maddening pitchers in the league. They will get Trevor Rogers (L), Elieser Hernandez (R), and Jesus Luzardo (L) over the weekend. Two lefties line up well for Atlanta, who has the seventh-highest slugging percentage against southpaws this year. And which Jesus Luzardo will we get? Will we get the first start five-inning, one-run, 12-strikeout version or the second start four-inning, four-runs, three-strikeout version? If I have to pick a side, I will be riding with the Braves’ offense all weekend.

Seattle Mariners (vs. KCR) – The Mariners hit the trifecta in the DFS pitching horse race this weekend. They get the best ballpark on the docket (T-Mobile Park is 29th in park factor), they get a struggling offense, and they have both Matt Brash and Robbie Ray lined up to pitch. The Royals have been one big dumpster fire so far unless your name is Salvador Perez. Kansas City ranks 28th in on-base percentage and 25th in slugging so far. They can’t get Bobby Witt going (and he was dropped to sixth in the order), Whit Merrifield looks old, Carlos Santana is oft-injured, and Adalberto Mondesi just looks lost. Chris Flexen can probably be avoided on Friday, although he is dirt cheap on DraftKings ($6,000). But I’ll be looking to load up on Brash and Ray on Saturday and Sunday.

Oakland Athletics (vs.TEX) – Speaking of underwhelming and underperforming offenses. It’s becoming clear that two huge offseason additions do not magically transform a mediocre team into a great offense. Through two weeks, Texas only possesses a .304 on-base percentage and .349 slugging percentage as a team. Now they travel to one of the worst ballparks for offense that MLB has to offer. Oakland’s park ranks 27th in offensive park factor and 26th in home run park factor over the last three seasons and the Rangers will face two good pitchers over their three days visiting. Both Frankie Montas and Cole Irvin will toe the rubber this weekend. Texas may not strike out much, but runs will be tough to come by over the next three days.

Jazz Chisholm (2B, MIA) – After nine games batting sixth or lower for the Marlins to start the season (including FIVE in the ninth spot), Jazz Chisholm was finally inserted into the leadoff spot in Thursday’s game against the Cardinals. Did he respond well to the promotion? Of course, he did, blasting a home run and two RBI. That bumps his slugging percentage up to .774 on the season. That combined with a .333 on-base percentage are numbers even Don Mattingly could not ignore anymore.

Assuming Chisholm sticks in that spot for the weekend series against the Braves, he draws as good a lineup of pitchers as you can hope for when facing the World Series champs. Chisholm, a left-hander, will face three very marginal righties in Kyle Wright, Ian Anderson, and Bryce Elder. For his career, Chisholm has a .308/.438/.746 slash line that looks like something Barry Bonds would do circa 2004. Add in the fact that the Marlins get the massive park upgrade to Truist Park this weekend, and Chisholm should be worth the price of admission through Sunday.

Michael Kopech (SP, CHW) – The overall numbers through two starts for Kopech look good, but not uber-prospect elite like many were expecting when he was named a part of this rotation before the beginning of this season. The ERA of 1.o0 is sparkling, of course, but the 8.00 K/9 and the 4.00 BB/9 look much more pedestrian. But what’s important to note is the progress made from games one to two, plus the stretching of the pitch count. Kopech was at 9.00 K/9 and 3.6 BB/9 in his second start compared to 6.75/4.50 in his first. The exit velocity on his balls in play was down 5 mph and he was able to go five innings as opposed to the four from his first start.

Assuming he can get up to about 80-85 pitches in start three, we could be looking at six innings and six to eight strikeouts against this Twins team. Minnesota has the fifth-highest strikeout rate against righties through their first two weeks and their slugging percentage ranks just 22nd. Like Chisholm, Kopech gets a big ballpark boost moving to Target Field for this one. Kopech is not likely to be priced like one of the aces on Friday (he is less than Tarik Skubal on DraftKings), but he just might end up looking like one.