MLB DFS LOOK AHEAD: Stacks and Fades for August 27-29 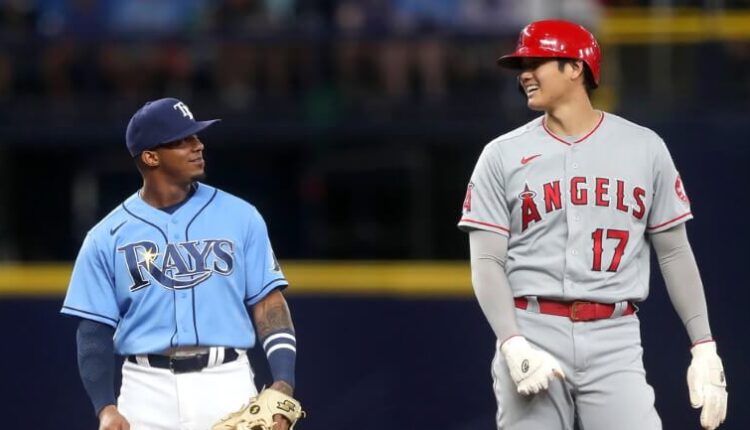 I have absolutely no fandom associated with the Kansas City Royals, whatsoever. But I do have one wish before the DFS season is over for 2021, and it intimately involves that organization. Please, Dayton Moore, let me play Bobby Witt, Jr. and Nick Pratto just once in a stack this year. I can then finish the 2021 season a less-miserable man.

Starting in a few days, the prospects are going to start arriving for September callups. I fully admit to playing some of my favorite prospects in the past just for the fun of it. No analytical or logical reason for doing it, but just so I could follow them pitch-by-pitch for one night. Which prospects are you hoping get the call next week?

We’ve got all the pitchers you would ever want on the Friday slate and then the advantage seemingly switches to the offensive stacks on Saturday. Let’s dig in and look at what might be signal and what might be noise as we try to differentiate our rosters this week.

MLB DFS Look Ahead: Stacks and Fades for August 27-29

Tampa Bay Rays (@BAL) – Do the Rays strike out too much? Of course! At almost 26%, they have the third-highest strikeout rate in the league this season. But that may not matter too much this weekend against the Orioles who allow the third-most contact (82%), the highest in-zone contact (89%), and the fourth-lowest swinging-strike rate (8.5%) in MLB this year.

The Rays get about as big of a park boost this weekend as you can find in MLB. They travel to Tropicana Field – ranked last in offensive park factor the last three years – to Camden Yards which ranks fourth. Baltimore has the second-best environment for home runs in that time span, so the prospect of a stack of high contact guys like Wander Franco, Manuel Margot, and Joey Wendle has me dreaming of a less-popular, cheap stack against pitchers like Matt Harvey and Spenser Watkins.

Arizona Diamondbacks (@PHI) – But, don’t the Diamondbacks stink? Why would we play their bats anyway? Well, for one, they make the Rays look pricey on Friday. Arizona has one player with a salary over $3,200 on Friday. In addition, they actually haven’t been terrible in recent weeks. Since the All-Star break, the D’Backs have the third-best walk rate, the eighth-best OBP, the 14th-best OPS, and the second-best line drive percentage in the majors. Their young kids like Daulton Varsho, Josh Rojas and Pavin Smith have come to play in the second half and their offense has improved.

But that likely comes to a halt this weekend against the Phillies, despite the move to a better offensive environment like Citizens Bank Park. We get our first glimpse of Aaron Nola since his near-complete game gem last weekend. Plus, Kyle Gibson and recent starter addition Ranger Suarez are helping lead this staff to the 11-best strikeout rate, the sixth-best WHIP and the 10th-best SIERA in the second half.

Despite the recent success, the Diamondbacks are still just 28th in OPS against right-handers this year, so a date with Aaron Nola and Kyle Gibson on the road is something you will want to fade.

Cincinnati Reds (@MIA) – It must be miserable to be a Miami Marlins fan. Do those exist? I’ve never actually met one. To have a team that is in a perpetual state of “next year,” and to see your top players each season shipped off to contenders must be miserable. How do you think South Floridians feel when they see Starling Marte having one of the best offensive second halves of the past 15 years up in Oakland?

Well, it’s not going to get much better this weekend, where we should continue to fade them against a trio of promising pitchers on the Reds. Somewhat obscure pitchers like Wade Miley, Vladimir Gutierrez, and Tyler Mahle – combined with a white-hot offense – have the Reds on the cusp of a Wild Card berth.

Reds’ starters have top-12 ranks in K/9, HR/9, ERA, and SwStr% in the second half, all while playing in one of the worst parks for pitchers we have in MLB. So the move to loanDepot Park in Miami (22nd in offensive park factor) should serve as an added benefit in this series. The Marlins as at team have a slugging percentage of .387 in the second half. Basically have a lineup full of Garrett Hampsons. Not too intimidating.

Wade Miley is $8,800 on FanDuel on Friday, so they are going to make you think about it if you want him on your roster. But I would have confidence in all three Reds pitchers this weekend.

San Francisco Giants (@ATL) – We are about to run out of superlatives to describe this San Francisco Giants season, particularly the underrated pitching staff. They have the sixth-best K-BB rate in the league but also rank fifth in WHIP, third in ERA, and fourth in SIERA. But this may be the weekend to leave them as a fade in your DFS lineups, as they face a potent lineup that loves to face righties at home.

Atlanta has the seventh-best OPS against right-handers this season, as well as the third-best walk rate. The lineup is relentless and just keeps coming after you, even with Ronald Acuna on the shelf for the season.

You can be sure that lefties Freddie Freeman, Ozzie Albies, and Joc Pederson will be front and center for the Braves all weekend, as well as Austin Riley who is hitting an unbelievable .349/.397/.679(!) over the last month. That four-man stack will take up ~40% of your salary cap if you want it on Friday at FanDuel. That’s a steep price to pay, but it would still be better than the $10,100 it would cost to play Kevin Gausman.

Fantasy Baseball: Pitchers To Start/Sit Down The Stretch