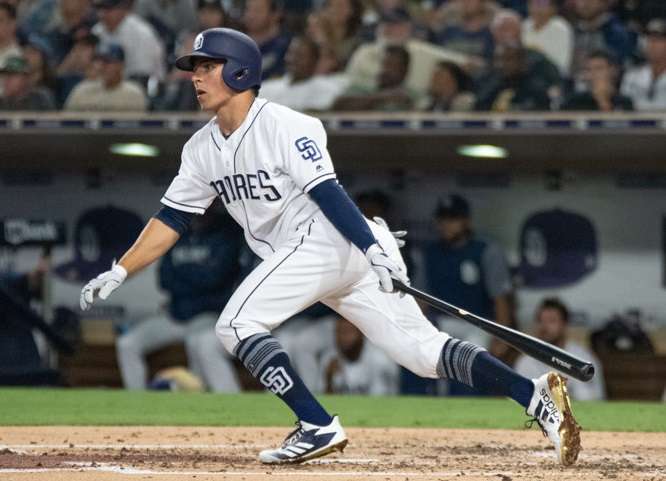 It doesn’t matter who you are or where you’re from, everyone knows the song Smells Like Teen Spirit by Nirvana. That awesome guitar riff from Kurt Cobain, Krist Novoselic on bass, and my boy Dave Grohl banging on the drums. That song was the biggest song in the world in 1991 and has stood the test of time. You know what else stands the test of time? Prospects. They’re always there and always coveted, regardless of your league format. Lately, teenage prospects in the lower minors have come the forefront in dynasty leagues.

In recent years, we’ve seen more and more prospects come up at 20 or 21 and sustain a high level of success right out of the gate. Some would even say we’ve become spoiled. We can thank Carlos Correa, Francisco Lindor, Corey Seager, Juan Soto, and many others for that.  While it’s not overly surprising that these guys are immediate factors, it causes us to need to dig a little deeper and grab guys earlier in their careers than we used to.

Teenage Prospects On the Rise

When you read the words “Teenage Phenom,” the name Wander Franco likely comes to mind with how he’s performed over the last few months, and rightfully so. Franco is the epitome of a “teenage phenom,” but he’s not the only teenage prospect making noise this season.

There can never be enough talk about Nolan Gorman. Never! I’ve seen various discussions over the last few weeks in which there was still some debate over who the #1 pick should be in FYPD drafts. Come on people. Gorman is the head honcho and the alpha male of the 2018 draft class. Hands down, no questions asked. Through his first 58 professional games, Gorman has smacked 17 home runs and 12 doubles with a .300/.383/.592/.975 slash line. You could say that questions about his hit tool have been silenced to a degree with this hot start. The Cardinals saw all they needed to see to promote Gorman to Single-A Peoria as an 18-year old just a few short months removed from being in high school.

Two more homers for #STLCards No. 3 prospect Nolan Gorman last night, and the 18-year-old slugger now has 15 in 50 @MiLB games. No one from this year's #MLBDraft has more dingers than the @Cardinals' first-rounder: https://t.co/7gkSwwQkGl pic.twitter.com/agqFLxTF0O

Just because he’s started hot, hitting over .300 so far, that doesn’t mean there still aren’t some concerns here. Gorman is still going to strike out a fair amount, and while I think his hit tool is better than people give him credit for, he’s still not likely to have many seasons where he hits north of .300. However, he’s more than showing that a solid average north of .270-.280 should be expected to go along with that 40-plus home run upside he has.

In closing, Gorman should be the No. 1 pick in all first-year player drafts moving forward. Case closed.

Fellow prospect analyst, Lance Brozdowski of Razzball and Viva El Birdos, had a chance to sit down with Gorman (video below) for Viva El Birdos and chat about baseball and various adjustments Gorman has made transitioning from high school to the minor leagues. Well worth watching.

Everyone is on the lookout for that next elite shortstop prospect to come up and destroy Major League pitching. Well, Tyler Freeman isn’t that guy, but he does fall into the category of players with solid upside that you can acquire for cheap in dynasty formats. I’m working on updating my organizational prospect rankings for my off-season content, but as a little preview, Freeman is cracking my Top-10 Cleveland Indians prospects.

On the season, Freeman is slashing .360/.411/.527/.938 with 29 doubles and 13 steals in just 252 at-bats in the short-season New York Penn League (A-). That’s around a 60-double pace over the course of a full season. Home runs weren’t included in the last sentence as power will likely never be a part of Freeman’s game. While he makes consistent hard contact, his swing is geared for line drives into the gap instead of over the outfield fence. Even without the power, Freeman’s hit tool and plate discipline (7.5 BB% this season), along with his plus-speed, make him an intriguing name to grab in dynasty formats.

Let’s keep this teenage wasteland going. I know wasteland is a horrible word to use in this situation, but it fits with this rock song/teenage thing we’ve got going here. And yes, I know the name of that song is actually Baba O’Riley. Vientos has quietly put together one heck of a season down in the Appalachian League. In 223 at-bats, he has 12 doubles and 11 home runs to go along with a solid .287/.389/.489/.878 slash line.

Speed? Non-existent. Hit tool and raw power? Very evident. That’s Vientos in a nutshell. His plate approach, plate coverage, and plus bat speed should allow him to blossom into an asset in both AVG and OBP leagues. Even better is his plus raw power that is showing up more and more in games. Long-term Vientos has the upside of a .280-plus hitter with the upside of 30-35 home runs from the hot corner. Investing now is highly recommended.

Brujan on the Rise

He’s not a teenager, but close enough. There haven’t been many hotter hitters than Vidal Brujan lately. Over the last month, Brujan has slashed .383/.478/.702/1.180 with nine doubles, three triples, and five home runs. That 1.180 OPS is second in the minors during that time, trailing only the red-hot Kyle Tucker. Oh, I almost forgot to mention that he has 54 steals on the season. From what I’ve heard, that’s pretty good.

Elite speed has been apparent with Brujan from the second he signed with the Rays back in 2014 out of the Dominican Republic and is easily his best tool, grading out at 65 or 70. While the speed is there, he hasn’t gotten the best reads on pitchers and only has converted on 69.9% of his stolen base attempts. But hey, he’s still barely 20 years old and has the raw speed to swipe 30-plus bags in the Majors if he makes some progress on the bases.

So, Brujan is fast. That much we’ve established. But, what about at the plate? Spoiler alert, he’s pretty solid there, too. Brujan makes a ton of contact from both sides of the plate with an all-fields approach, with the left-side being stronger than the right. Power isn’t quite there yet, but there’s enough raw power and bat speed to turn into double-digit pop to go along with a .280-plus batting average.

Overall, Brujan has the makings of a top of the order hitter with a solid OBP and plenty of speed. Definitely a name to grab now in dynasty leagues before his price tag continues to rise.

Thanks, Mets. Thank-you for robbing us of an impact bat down the stretch. “But we want to give Dominic Smith, Wilmer Flores, and Jay Bruce at-bats.” Yeah, that makes sense. Give the time to a prospect bust, a backup, and a player on the downside of his career instead of one of the top offensive prospects in baseball that will be a big part of your 2019 plans and beyond. Great idea.

In reality, there are a few reasons Alonso isn’t getting the call. Firstly, his defense at first base needs some work. And while he’ll never be confused for a gold glover, improvements have been made, especially over the last couple of months. On top of that, are the two words in baseball we all dread to hear. That’s right, service time. This is where the business side of baseball gets in the way.

While we might not have him for the fantasy stretch run this season, Alonso has a great chance of locking down the first base job next spring, making him a solid high-upside pick in the middle rounds of fantasy drafts.

I’ll keep this brief as I went over Urias the other day in Dynasty Dugout as well as my waiver wire recommendations for this week. Yes, I called Urias overvalued just three days ago. I stand by that claim. I’d be a fool to change my mind 72 hours after making that proclamation. However, as I mentioned Tuesday, Urias is one of the best pure hitters in the minors with plenty of .300-plus seasons in his future with the upside for 12-15 home runs.

Due to an innings limit, the Chicago White Sox have shut down one of their top minor league arms for the remainder of the minor league season, which only lasts another few days anyway. All the rage in this system is about Michael Kopech, and that attention is certainly warranted, but Dylan Cease has outperformed Kopech this season and his upside is nearly as high.

This is a 99 mph Dylan Cease fastball. He’s perfect through two pic.twitter.com/Dv3PcEAA21

Cease has ranked in the 50-75 range in my last two prospect ranking updates, but will likely be much higher in the next update. He features an elite fastball-curveball combination that could have him succeeding out of a Major League bullpen today. Not in 2019 or 2020, today. The fastball sits in the mid-90’s with arm side run and can get as high as 98-99 when he wants to reach back for a little more zip. As good as that pitch is, his hook is equally as nasty and effective, sitting in the upper 70’s with two-plane break. The change-up has lagged behind, but Cease made progress with that pitch this season and it should be at least an average pitch for him moving forward.

Paddack features three pitches, and in my opinion, all three are plus offerings. His fastball sits in the 92-96 range with solid movement that he can command incredibly well. To offset that, he features curveball with good tilt and a devastating change-up with two-plane fade. As you can see from his stats in the last paragraph, control is not an issue and he has no difficulties ranking up strikeouts at a very high clip. Paddack should begin2019 back in Double-A with a late-2019 MLB debut not out of the question.

It’s not official yet, but rumors of a Jesus Luzardo shutdown have begun to percolate. Keep a close eye on him in the next 24-48 hours.