Max Kepler: A Deep Dive Into The Breakout 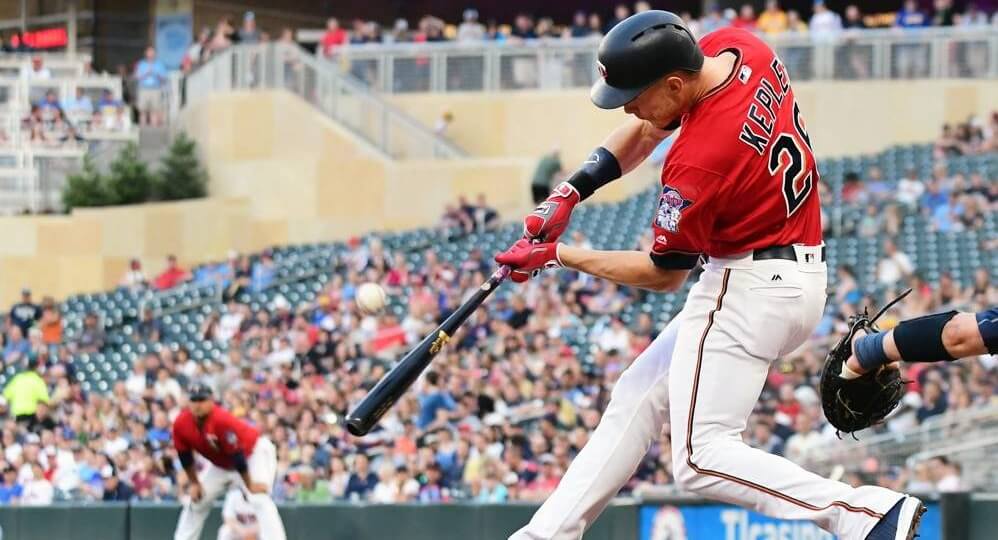 Max Kepler is finally having the break out we’ve all been waiting for. He’s been a name on just about everyone’s sleeper list at one point or another over the last few seasons. It truly is nice to see him coming around and hitting on that potential. The funny part is I barely see his name mentioned and it’s one if the quietist breakouts considering the love this guy has received over the years.

He’s ranked 58th in roto formats and 34th in points leagues. He has been a huge boost to any team he’s been a part of and one of the best draft day values. That’s if he was even drafted in your league. Regardless, we are going to dive into the breakout and take a look at where the changes and improvements occurred to ultimately lead to this amazing year he’s had.

Breaking Down the Breakout: Max Kepler

Max Kepler currently sits at 32 home runs, 78 RBI, and 81 runs with a triple slash of .255/.335/.530. Some may complain about the average, but in today’s game, .255 with high-end power is perfectly acceptable and useful if you find it in the right places. Which has exactly been the case with Kepler.

Heck, he’s even chipped in a steal this year. Kepler has sprint speed in the 70th percentile, so he has the upside to steal some bags. He’s always chipped in a handful of steals every year, he’s just not too efficient. He has 1 steal in 6 attempts this season and last season Kepler was successful in only 5 of 9 attempts. With how well the offense hits as a whole, if he isn’t efficient with his opportunities he will just continue to see a decrease in his opportunities.

Max Kepler obviously isn’t drafted for the speed but knowing it’s there and can allow for him to chip in 5-10 steals if he worked on the skill set only adds further value to what he brings to the table. Speaking of which, it’s time to take a look at the profile as a whole.

Max Kepler looked great in the minors. In 2015 and 2016 he walked more than he struck out and he flashed some of this power. He initially, as most rookies or young players do, didn’t have the same success initially entering pro ball.

The walk and K rates weren’t bad but they weren’t what he’d been doing in the minors. That was, until 2018 when he appeared to have made the adjustments to big league pitching and starting walking more and striking out less. Even prior to 2018, the K-rate has been on a steady decline since entering the league. 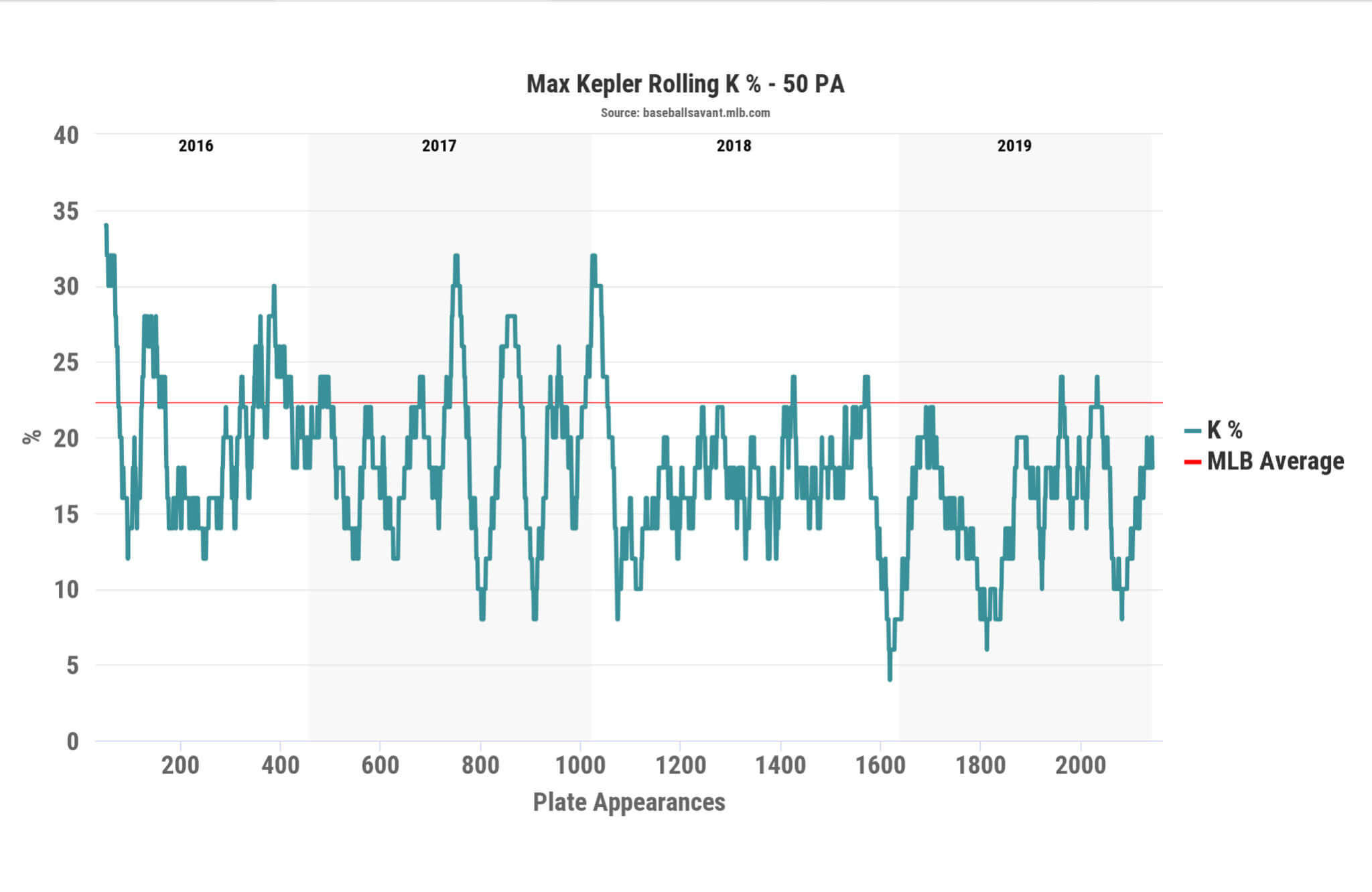 So far in 2019, the walk rate and K-rate gains have remained intact. Little change in both and the walk rate currently sits at 10.1%. The k rate is 16% exactly. Both of which are better than the league average. One thing I do notice is the BABIP is surprisingly low.

For someone with above-average speed, you’d expect a better BABIP. Since entering the league in 2016, his BABIP has never been above .276. His MLB career BABIP is .254. With all this said, with his BABIP currently sitting at .243, there’s still a chance for improvement on it.

With a wRC+ of 121, it is the first time he has crossed over the 100 point mark in his pro career. Everything seems to be on the rise with Max Kepler.

You may initially notice the chase rate increase from 24.9% in 2018 to 30.3% to 2019. Even with this increase, the walk rate is barely effected from last year and it’s still better than the league average.

The swinging strike rate is also up a tad to 9.1% from 7.1% last year. Again, better than league average even after the increase. This would explain the slight increase in strikeouts we’ve seen this year. He’s also becoming more aggressive as a whole. With the added aggression chasing more pitches, adding some swing and miss to the profile is pretty typical.

The real interesting change is the zone swing (or Z-Swing) increase. The Z-Swing rate is up 10.4 percentage points from 2018 and currently at 75.7%. The part that intrigues me is the zone contact rate (or Z-Contact%) actually improving slightly to 92.2%. He’s swinging a lot more at pitches in the zone and making even more contact on those said pitches.

The added aggressive has really benefitted Kepler this season. I’ll gladly give up a few walks and add a few K’s if the outcome is what he has been to this point.

As far as fly ball, line drive, and ground ball rates go, not a whole lot stands out as far as changes. Kepler hits a good amount of fly balls annually and the current FB% is 45.7%. I think the slight increase in LD% may be worth noting. It’s up to 17.8% this year compared to 15.9% from last season.

The most notable change to the batted ball data is the pull rate. Max Kepler appears to have made a huge emphasis on pulling the ball. That, paired with the already solid fly ball rate, would help explain the power gains. The pull rate is a career-high 55.9%. He always had somewhat of an all fields approach prior to this season. This change suggests there’s an attempt at adding power to his game. I’d say he’s been successful, wouldn’t you?

You’d think with how pull-heavy Kepler has been this season that teams would shift more to adjust and maybe the shift would be a reason behind the BABIP woes.

Although he’s not hitting great vs. shifts, he’s actually hitting worse vs. no shift. I’m pretty surprised by this finding.

I love looking at statcast pages. It tends to assist in reasoning to buy or sell the production. Well, while taking a look at Max Kepler’s it suggests what he’s done to this point has been legit.

Kepler has career highs across the board. Outside of the obviously great counting stats, some of the most notable stats worth mentioning are his hard-hit rate, average exit velocity, the launch angle, and the barrel rate.

The barrel rate of 8.9% makes a lot of sense. He’s making better contact on pitches and it shows. This, among some of the other previously mentioned changes, explains the average exit velocity improvement to 90 MPH. 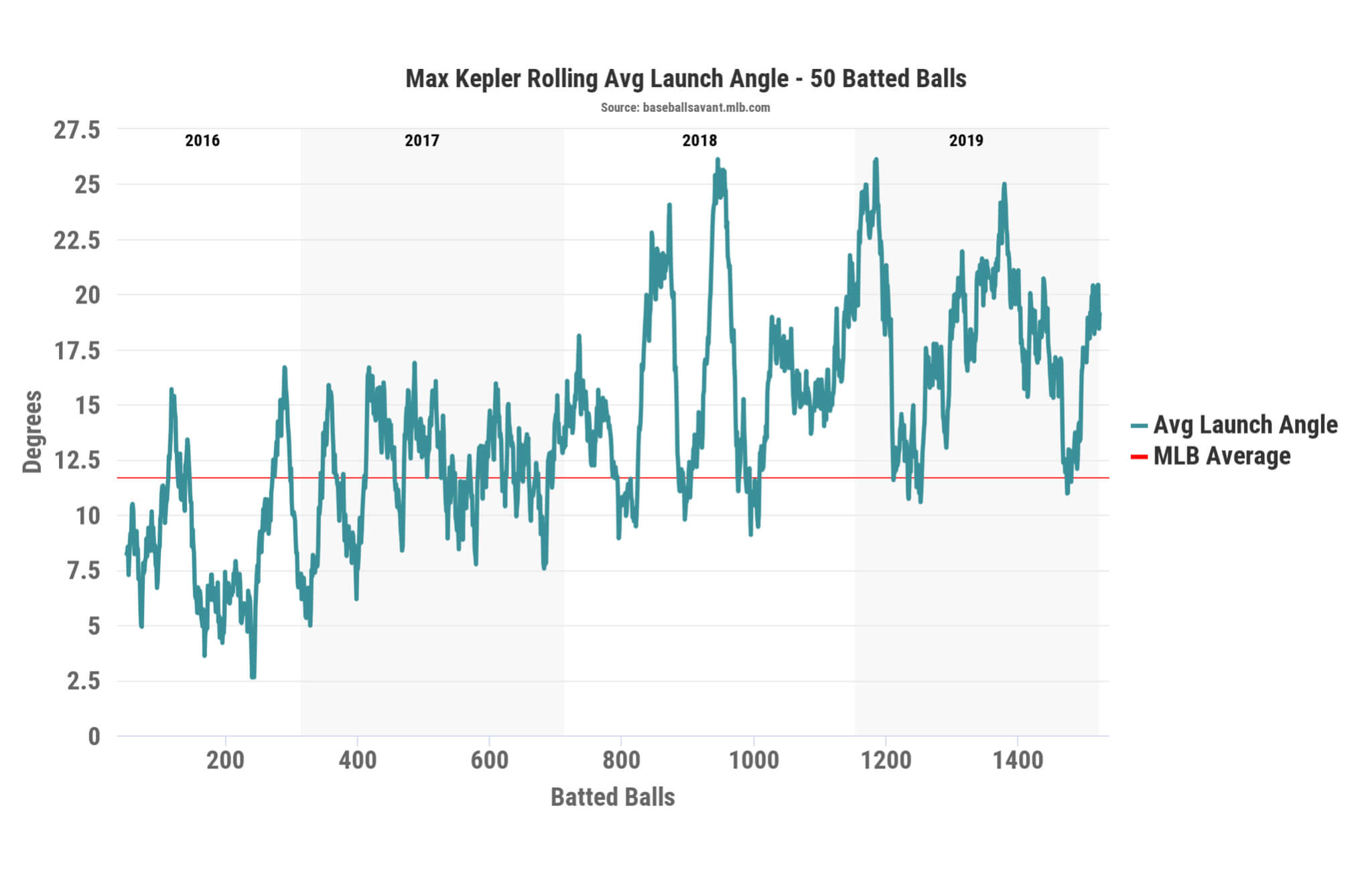 The increase has been gradual over the years. It is currently at 17.7 degrees which is keeping the fly ball rates up where they’re at and maybe lending itself to the improved LD rate previously mentioned.

There is one concerning stat worth mentioning and that is the difference in his slugging percentage of .534 and the xSLG of .448. Some variance is typical but this large of a gap suggests some of the power won’t likely be sustainable. But this is something I wouldn’t be overly concerned about. The power is still legit but he just may be overachieving a bit.

For all you Max Kepler truthers out there, it has finally paid off for you. You may now take your victory lap. I’m definitely buying into Kepler going forward. He feels like a player who will be a solid mid-round guy to help be a core to any team. Kepler won’t ever win you leagues but he won’t lose you any either. I actually can see him being a solid value in drafts next season and offer this same upside we’re getting from him. I believe this is who Kepler is, so enjoy the ride the rest of the season.