Runs on the Cheap: Late Round Runs 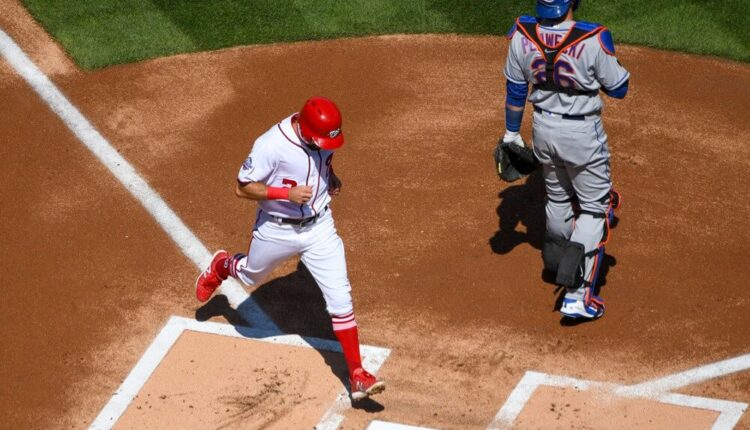 Let’s continue with the category sleeper series, but shift our attention to late round runs. In order to score runs you need to get on base. When you’re good at getting on base, you usually hit near the top of the lineup. Of course, the lineup and ball park you play in also have a lot to do with it. It’s not a coincidence that the top 13 run producers from 2018 played on top-12 offenses. Tommy Pham and Mike Trout were the only two players to hit the century mark in runs, despite not playing in a top 12 offense. Pham spent half of his season in St. Louis and Trout is a freak of nature.

There were 19 players who scored 100 runs last season, led by Mookie Betts and Francisco Lindor at 129. Mookie is a good bet to flirt with that number again in 2019, but the same can’t be said about Lindor. His lineup won’t be as strong this season as it was last year, plus he’s battling through a calf injury at the moment.

Don’t be afraid to take what the draft gives you. There may be a slight decline in Matt Carpenter’s game this season, but if he continues to fall, he becomes valuable. The Cardinals’ leadoff man has scored 202 runs over the last two seasons (11th-most), with 111 coming last year. That’s not even a career high for the 33-year-old. Out of the 19 to score 100 last season, all of them went within the first 100 picks. So with that said, let’s go digging for some late round runs.

Daniel Murphy is set up to have a nice bounce-back season in Colorado. The 33-year-old is on the decline, but he’s a .299 career hitter with an 88.5 contact percentage. That’s a good recipe for success, especially when you play half your home games at Coors Field.

Murphy’s debut in 2018 was delayed due to a knee injury, but he hit .315 with 11 home runs in the second half (241 PA’s). The second baseman – who will add first base eligibility – will hit near the top of what is a great looking Rockies lineup. Murphy has scored at least 88 runs in two of his last three seasons.

Aaron Hicks’ 90 runs last season were the 25th-most in baseball and he only led off 31 times. The New York Yankees’ leadoff role pretty much belonged to Brett Gardner who cashed in with 95 runs in 2018. The Yankees are going to score a lot of runs again this season but as of now, Hicks is expected to open up as the team’s leadoff hitter.

Health has always been a concern with Hicks and a back injury has already slowed him down this spring. I have Hicks as a top 30 OF as the upside is tremendous and he’s going much later than that in drafts, especially with the ‘DTD’ next to his name.

Adam Eaton had back-to-back seasons in Chicago with 90 plus runs before coming over to Washington in 2017. He’s only totalled 79 runs in his two seasons as a member of the Nationals, but he’s only had 477 PA’s. His 55 runs over 370 plate appearances would have put him near the 90 run mark if he stayed healthy. That’s a big IF these days, but the price tag is worth it.

Eaton has earned the right to lead off thanks to a .287 career average to go along with his past success in that role. The Nationals will still be one of the highest scoring teams in baseball even with the loss of Bryce Harper. If Eaton continues to have the same bad luck, Michael A. Taylor would be a must add. He wouldn’t lead off like Eaton, but he’ll be a great source for speed.

Jorge Polanco is one of my favorite all-around fantasy baseball sleepers in 2019. He can contribute across the board and his price tag doesn’t reflect that. He’s a career .272 hitter, which should keep him atop one of the most improved offenses in baseball. One that will score plenty of runs via the long ball. We’ve yet to see a full season out of the Twins’ shortstop, but in 544 PAs in 2017, he hit 13 home runs and stole 13 bags.

For more on Paul DeJong

The Rangers’ leadoff man has a career .378 OBP and his lineup remains strong as does his home park. He enters 2019 with a 12.1% walk rate which has led to seven seasons with at least 80 runs. He’s also a six-time 20 home run guy. Choo finished as a top 150 player last season in standard 5×5 leagues and you can bet he’ll return value again in 2019.

I had to lower Ketel Marte’s run projection slightly with the Adam Jones signing, but he’s still a strong late-round runs target. Before the signing, Marte was expected to be the everyday centerfielder and leadoff man for the Arizona Diamondbacks. He’ll still get some time in center, but he’ll likely become the team’s utility player with some appearances at second and short. The big loser in all this may be Wilmer Flores as he’ll lose some PT to Marte.

Jones may be a four-time Gold Glove winner, but his defense has declined considerably over the last couple years. He’s also coming off a season where he hit just 15 home runs and 63 RBI – his lowest totals since 2008. Having said that, he’s a career .278 hitter and he’s been better than that in each of his past two seasons. Jones will play come center and he’ll play some right, should Steven Souza Jr. land on the IL again. Point is Marte will find playing time and when he does, he’ll be a threat to get on base, steal bags and score runs. Fans has him for 97 runs, but 70-80 seem more reasonable.

Kole Calhoun is a two-time 90-run scorer, but a decline in average has limited him to 70 runs in each of his last two seasons. Calhoun made a couple tweaks at the plate and improved on his .187 first half average, but still only finished with a .208 mark. He’s not that bad of a hitter. The Angels seem to agree or else they wouldn’t open up the season with him as their leadoff hitter. It’s a role he’s been in before. Calhoun isn’t even thought of in 12-team standard leagues, but in deeper formats with five OF spots, consider him at least for April. Anybody who hits in front of Mike Trout and Justin Upton deserves your attention.

Are you on board with Chris’ late rounds runs sleepers? For more great fantasy baseball rankings, strategy, and analysis check out the 2019 FantraxHQ Fantasy Baseball Draft Kit. We’ll be adding more content from now right up until Opening Day!