Kyle Tucker is on the Path to Superstardom 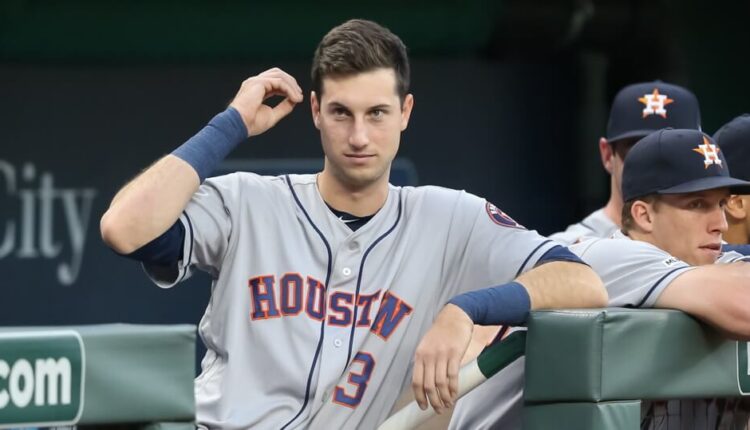 What makes a baseball player a superstar in the modern-day landscape? First and foremost, they have to be able to hit. In a day and age where chicks, dudes, and everyone in between dig the long ball, there has to be power in the bat. Next, making highlight-worthy plays in the field is another quick path to stardom. Finally, having speed on the base paths provides the finishing ingredient. Players like Mike Trout, Ronald Acuna Jr., Fernando Tatis Jr., and Mookie Betts all check the box. As other players look to join the elites, there is an outfielder in Houston who is showing signs of reaching this level. That outfielder is 24-year-old Kyle Tucker of the Houston Astros.

Kyle Tucker is on the Path to Superstardom

After seemingly years since the expected all-world prospect was supposed to breakout, it finally came in the 2020 shortened season. Tucker hit .268 with nine home runs and eight stolen bases in 58 games. More impressive were his 42 RBI, and league-leading 6 triples. Paced out to 600 plate appearances, Tucker’s numbers look all the more impressive:

Those are borderline first-round numbers, and Tucker did that in his age-23 season. He’s only getting better.

To say those numbers aren’t attainable for Tucker in 2021 is an incorrect statement. The RBI totals will likely come down, but the runs could go up. He is going to steal over 20 bases, he is simply too good on the base paths not to. The home runs are what should be a minimum projection, and the batting average is around what he’s always done. Let’s dive into his home run and batting average outlook, as the two seem to be the biggest question marks from his pundits.

Spike in EV after the 35-45° range, HR outcome less likely. He's a small adjustment/larger sample away from A LOT more HRs pic.twitter.com/wIYC781IIY

Tucker averaged a hard-hit ball from the -5 to 5-degree range, all the way through the 20 to 30-degree range. While this is good for batting average, most home runs are hit in the two ranges after these ranges, 25 to 35-degrees and 30 to 40-degrees. Tucker, for some reason, didn’t even average 90mph on these events. While that normally would be concerning, the increase in exit velocity immediately after the 30 to 40-degree range says there is a path to more home runs. Whether it be too small of a sample, or a mechanical adjustment, Tucker has the power in the bat to get over 30 home runs.

Preach. It seems like analysts and casual players alike believe Tucker is a batting average risk. Guess what? We don’t live in a world where a .265 batting average is bad anymore. Since 2016, when Tucker was 19-years-old, he hasn’t hit below .266 across an entire season. For his entire pro career, summing every hit over every at-bat from 2015 through 2020, he’s hit .277. It seems too many are weighing his struggles early in his MLB career too strongly. Simply put, I don’t care he struggled across 144 plate appearances in his age 22 and 23 seasons. While .277 may be a bit too optimistic, it is attainable. He’s closer to a .277 hitter than a .240 hitter, and Tucker can be expected to hit around .265 routinely. That is not a batting average risk in modern-day baseball. Continue reading his plate discipline for further validation.

Kyle Tucker is a good hitter, really good. Diving into his plate discipline confirms that statement. First, the primary metrics to best see a hitters plate discipline are strikeout and walk percentage. Tucker’s career strikeout rate in the MLB is 21.2%. League average over that same time period was exactly that, 21.2%. In 2020, Tucker lowered that to 20.2%, and he started striking out far less often as the season went on. 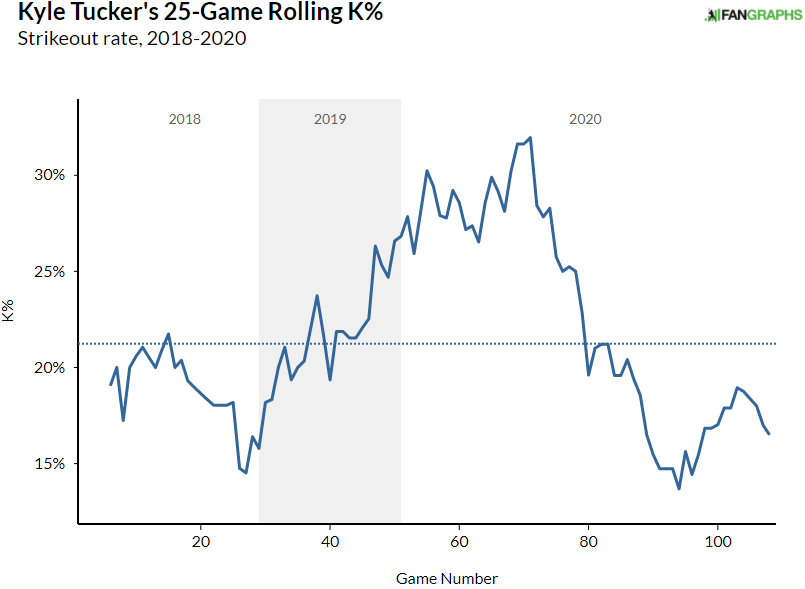 Uncoincidentally, when Tucker started striking out less, he began getting more hits and walks. When examining Tucker’s career 50-game rolling wOBA, he peaked as high as .380 in early September of 2020. 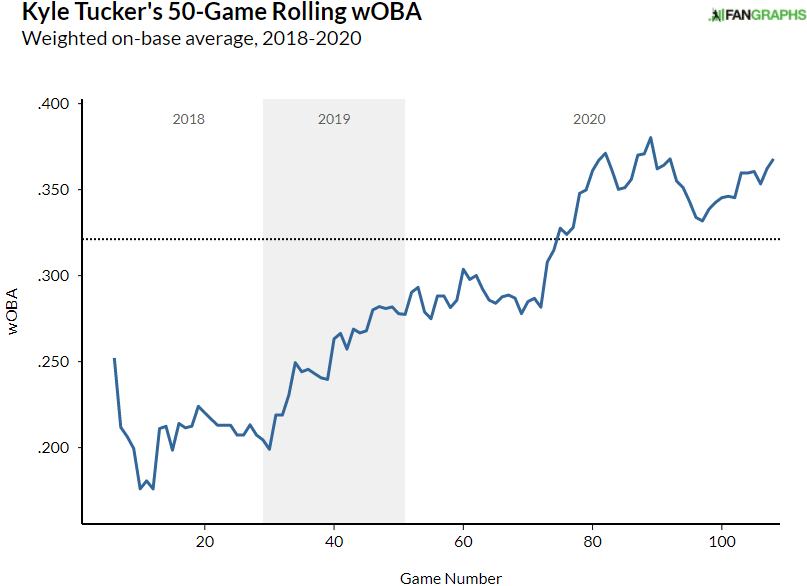 About halfway through 2020, Tucker’s wOBA consistently stayed well above league average. That is a significant trend for a player believed by many to be a worry in the on-base department. Tucker was hitting for power, getting on base, and stealing bases.

Other numbers supporting Tucker’s plate discipline skills include swinging strike rate, whiff rate, and out-of-zone swing rate. While his numbers looked bad to start the season, Tucker’s numbers trended downward throughout the season. So much so that he was below league average in both. 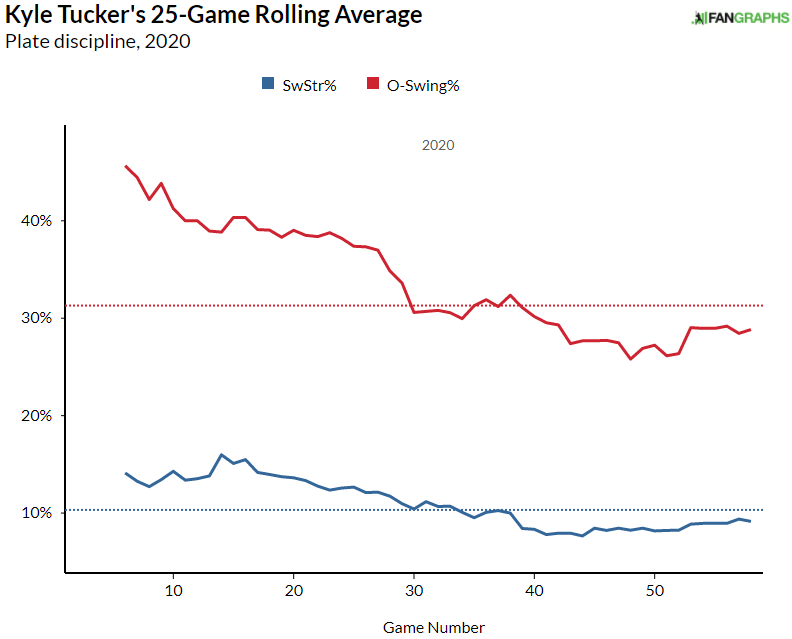 This doesn’t typically correlate with a perceived .260 or worse hitter. While extremely important, swing and miss data doesn’t tell the whole story. To put the final pieces to the puzzle, Tucker’s batted ball profile needs to be examined.

Now that it is understood that Tucker has above-average plate discipline, it is crucial to look at his batted ball profile to cover all grounds. When first looking at his baseball savant profile, his numbers are lit up in a red shade nearly everywhere. This is a good thing, as it means his percentile rankings across the league are above-average or better.

The numbers that stand out the most are the 84th-percentile exit velocity and 77th-percentile hard-hit rate. While those aren’t quite elite numbers, they are quickly approaching that territory. Especially when you factor in Tucker was in his first full season at the age of 23. Young hitters like Bo Bichette (23) and Luis Robert (23) are praised for their bats, but Tucker outperformed their exit velocities and hard-hit data by a wide margin. So why does Kyle Tucker not seem to get the same amount of hype as the other two? That’s likely due to his barrel rate and home run output in 2020.

While not bad, his barrel rate at 58th-percentile was only slightly above league average. That showed in his power output, hitting 9 home runs 228 plate appearances. With that said, Tucker has plenty of power in his bat. We can go back and look at the launch angle range graphic included at the beginning of the article for proof. 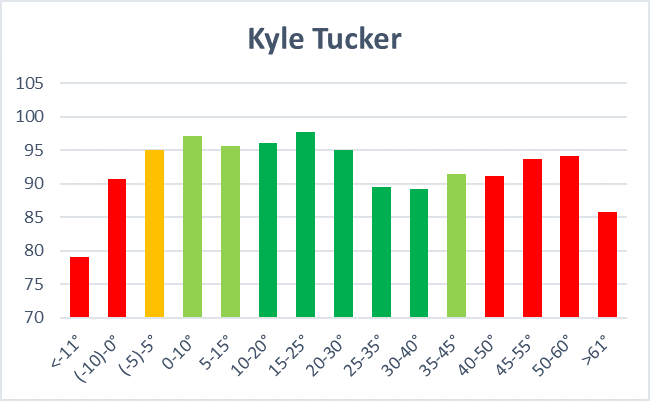 For reference to better understand the graph, the green bars are prime ranges for average and ISO (isolated power). Red are ranges that typically end with an out. Tucker is elite in the 0-degree through 30-degree range, but once he gets to 25 to 35 and 30 to 40-degree ranges, his exit velocity takes a large dip. These two ranges, along with the 20 to 30-degree range, produce the highest amount of home runs. However immediately following these two ranges, his exit velocity rises back up over the next four ranges. Simply put, Tucker is a small adjustment, or larger sample, away from breaking into true power.

Finally, another criticism that Tucker gets from his pundits is he is a heavy pull hitter who hits a lot of fly balls. These types of hitters typically have lower batting averages, regardless of their swing and miss profile. Tucker is undoubtedly a heavy pull hitter, as his MLB career 45% pull-rate is 8.4% above league average. To no surprise, he faced the shift on 73.9% of his plate appearances. Tucker’s wOBA against the shift was .309. Against no shift, it was .462. This is a valid argument against his batted ball approach. This is the primary reason Tucker can be projected to be a .265 hitter instead of a perennial .275 or better hitter the rest of his profile suggests.

Simply put, Kyle Tucker is a high ceiling, high floor player with full-time at-bats. And now that the latter is official, the former will come to light for the baseball world to see. Tucker is a small sample in the majors, and that naturally increases risk early in drafts. The trepidation of drafting him is naturally understandable. However, Tucker is an elite talent, and he’s going within the top 40 picks for a reason.

Not many players have ever accomplished what Tucker has done since he’s played professional baseball (including the minor leagues). Since his age-20 season in 2017 (A+/AA), Tucker has never had a 600 plate appearance pace below a 20/20 home run/stolen base number. 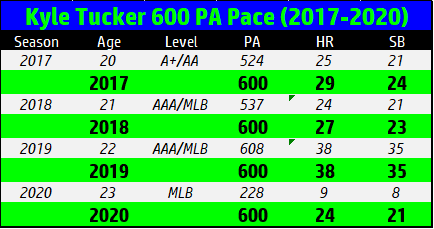 The former fifth overall pick in the 2015 MLB Draft has lived up to all expectations, if not more. While it did take him longer to break out in the majors than was anticipated, his 2020 season was the beginning of a future superstar. Don’t let Tucker’s youth and inexperience in the majors fool you, he’s a draft day bargain, and could be a 1st round pick come this time next year.

Dynasty Sells to Consider Prior to the 2021 NFL Draft