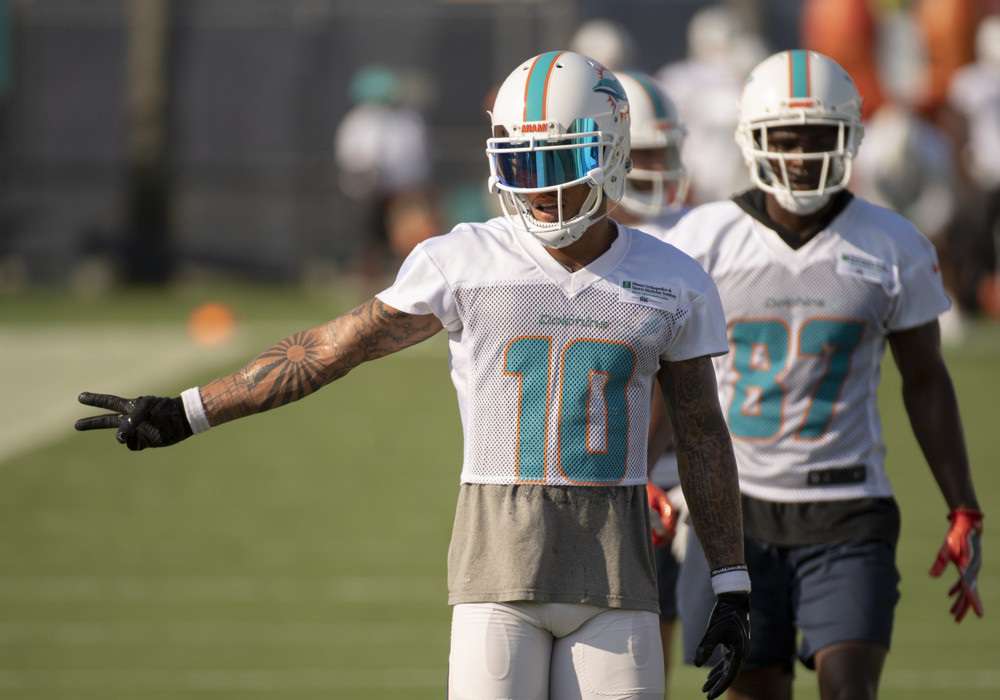 What if I told you that there was a wide receiver who has posted WR3 production in three out of the last four seasons despite never having been drafted among the top-60 fantasy receivers? What if I told you that this preseason, that same receiver is still being drafted outside the top-50? Is this someone you might be interested in? If so, allow me to formally introduce you to Kenny Stills of the Miami Dolphins.

Sure, you probably already know who Kenny Stills is. After all, he has been in the NFL since 2013. What you may not know, however, is that he has quietly been a top-30 fantasy wideout in each of the last two seasons despite consistently being overlooked by fantasy owners. Stills is a potential steal again in 2018. There is plenty of reason to believe he will be just as productive (if not more so) this season as he has been in the past.

The Case for Kenny Stills

First, Miami has a ton of receiving volume available from last year’s team. There are 290 targets and a 49.4-percent target share available for the taking. Both of those numbers put Miami in the top three in the NFL. This is of course largely related to the trade of target magnet Jarvis Landry to Cleveland. And while I expect most of that missing volume to fall on the shoulders of Danny Amendola and Albert Wilson, I am optimistic that Stills’ target share will improve as well. Last season, Stills was targeted on 15 percent of throws which was good for just 45th among receivers.

In addition to the likely increase in volume, Stills should also see a boost in production due to the return of Dolphins’ starting quarterback Ryan Tannehill. Tannehill certainly has his flaws, but he can’t be much worse than Jay Cutler was last season. Cutler was the worst fantasy quarterback statistically speaking in 2017 and wasn’t much better in real life. Tannehill is not elite, but he is a more accurate passer and should enable Stills to have another productive year in Miami.

Even though he was stuck with Cutler for most of 2017, Stills managed to finish in the top-25 among all NFL wide receivers in several metrics including receiving yards, targets, touchdowns, total air yards, and aDOT (average depth of target). The former New Orleans Saint has caught 15 receiving touchdowns over the last two seasons which ties him for seventh at the position during that span. While it is largely true that year-to-year touchdown receptions are not the “stickiest” stats for wide receivers, check out where Stills is being drafted compared to the eight receivers ahead of or tied with him in touchdown receptions since 2016:

As he has been for several years now, Kenny Stills continues to be severely undervalued from a fantasy standpoint. That is undeniable regardless of his touchdown output. He still would have finished as a WR3 last season had he only caught four touchdown passes. (He caught six.) While I wouldn’t quite put Stills on the same pedestal as some of the top wideouts on this list, I absolutely think the 26-year-old belongs in the conversation with thirty-somethings Crabtree and Nelson as a fantasy WR3.

Stills has scored at least 110 standard fantasy points in three of the last four years, yet he is being drafted after the likes of unproven rookies Calvin Ridley and D.J. Moore. He is also being selected after two receivers with the surname Bryant, one of whom is not currently on an NFL roster. Fantasy owners who can nab Stills at his current ADP in the twelfth round or later will be handsomely rewarded by season’s end. I expect him to return seventh-round value and finish the year as a fantasy starter once again in 2018.