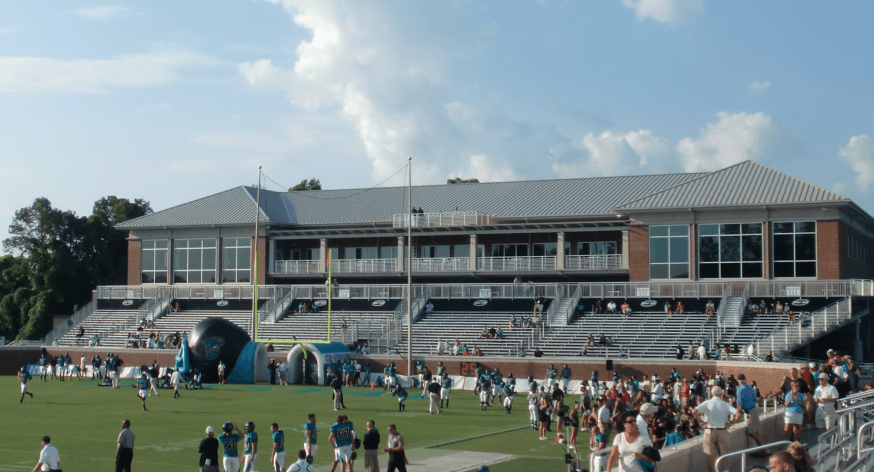 This offseason I decided to email a variety of coaches around the FBS and just spend five minutes talking about the upcoming season, the previous signing period, and their expectations for this season. I reached out to second-year Head Coach Jamey Chadwell of Coastal Carolina and he agreed to an interview with me.

Coach Chadwell served as the head coach for the North Greenville Crusaders, Charleston Southern Buccaneers, and the interim-Head Coach for Coastal in 2017 before replacing Joe Moglia at Coastal last season. In his career, Coach Chadwell was able to reach the FCS and Div. II Football Tournaments and won multiple Big South Championships. He boasts a career record of 68-51 and led the Chanticleers to a 5-7 record a season ago.

This interview was strictly a team preview for the 2020 season and I avoided discussing fantasy football topics so as to avoid placing Coach Chadwell, the Sports Information Department or Coastal Carolina University in any uncomfortable positions with the NCAA.

Question: I know that you had taken over the head coach role in 2017 after coach Moglia took a sabbatical for health reasons but in your inaugural season as the Coastal Carolina Head Coach you managed to secure a second-straight 5-7 record. What are some things this offseason you are focused on to reach that sixth win and bowl eligibility?

“The main thing last year, obviously you’re trying to win every game, but you want to establish the culture you want, your identity, how you play your game. We learned last year that we are good enough to compete in those games but we aren’t good enough yet to win all of them. This offseason we are focusing on how we can overcome those close losses. Last season we lost five games by a total of 24 points. We are trying to figure out how to overcome those 24 points, what we need to do to improve ourselves. It’s been a lot of focus on trying to overcome self-inflicted wounds, trying to avoid penalties, lining up offsides, the little discipline details are our focus to try to get us over the hump.”

Although the Sun Belt conference schedule has not been dropped, Coach Chadwell mentioned that Coastal Carolina will only avoid playing Louisiana-Monroe in its 2020 schedule.

Question: National Signing Day was a few weeks ago and you brought in some hefty guys for the defensive line and some additional pieces in the secondary. Who are some guys that you could potentially see getting time sooner rather than later?

“Well, we have 11 guys that are here right now that were able to come in early which is a big deal. From an offensive standpoint, there is a Kameron Brown (Wide Receiver, Charleston Southern) that’s a transfer, you’ll see him quite a bit. Shermari Jones (Running Back, Independence CC), running back, you’ll see him play quite a bit. Those two will hopefully be some key personnel for us on offense. I think that there is a chance that a freshman, Logan Mauldin, a tight end has a chance to see the field if he continues to develop.”

“From a defensive standpoint, D’Jordan Strong (Defensive Back, Northeast Miss CC) the defensive back that came in should play quite a bit. Obviously we’ve added in some defensive linemen in Travis Geiger and Will Gaby that will hopefully be a part of our rotation. I see those guys really coming in and making a contribution”

Question: You had mentioned a running back and I want to talk about a big-time running back down there in CJ Marable. Marable finished up the 2019 season with 1,300+ yards from scrimmage and 14 touchdowns. What are your expectations for CJ in 2020?

“He’s a phenomenal leader for us first of all and he’s put himself into a position to have a great year. I just love the way he works. Obviously it’s his senior year and our goal is to continue to find ways to use him and also give him some rest. Last year he was the bellcow the whole time and it was hard for us to give him some time to really get into the business of things but I expect him to have another banner year. If he can have something similar with the people we have added in then I’m really thinking he has a chance for a first or second-team All-Conference or potentially Player of the Year if he can have another solid year. He’s a special player no doubt.”

Question: I’m not going to come at you outright and demand you name me a starting quarterback, but you have two quarterbacks in Fred Payton and Bryce Carpenter that are both on your roster. What is something you like about both of these guys that could potentially lead them into taking over that starting role this year?

“Well you know, Fred has the tools to be a great passer and he’s also quick enough to cause some things to happen so he could be a true dual-threat guy. He has a lot of the right things. We are working with him on being more consistent. Bryce is a capable passer but a very good runner and he’s very tough. One thing about Bryce is that he might get beat up but he’s going to keep going and keep playing. He might have the worst play you’ve ever seen and he’s going to come out on the field looking to make something happen. He’s got a great toughness to him. Again for him, consistency. Our decision is going to come down to who can use the tools that they have more consistently. We also have two freshmen that we redshirted last year (Justin’s Assumption: Jarrett Guest, Grayson McCall) that are both very talented and are in the mix as well.”

Coach Chadwell and the Coastal Carolina Chanticleers begin the season with a trip to Columbia, SC on September 5, 2020, to take on the South Carolina Gamecocks.

Be sure to follow @CoastalFootball for more information on the Chanticleer’s upcoming season.