Trend Tracking: What to Make of Lucchesi and Alcantara? 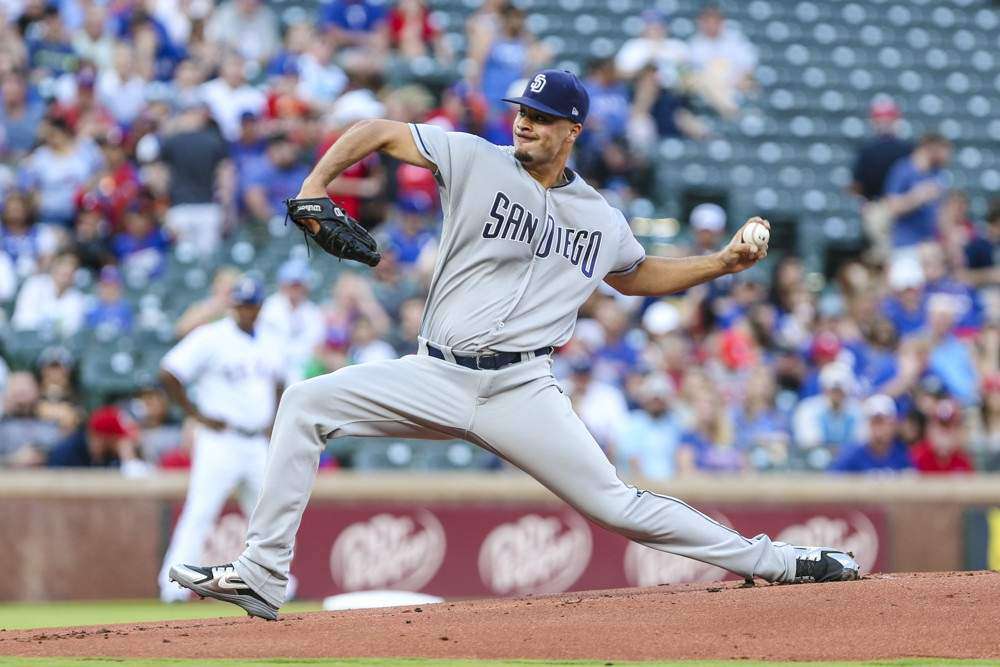 The season’s almost over. For some owners, the playoffs are underway or there’s room for jockeying in roto categories over the next two weeks. Not everyone can be so fortunate though. Many owners have to turn their attention to 2019, considering keepers in dynasty leagues or getting a much-too-early head start in preparing for redraft leagues.

The past couple weeks, I’ve tried to balance those differing interests by highlighting young players who could be viable contributors down the stretch while highlighting adjustments they’ve made which might be relevant to their future. Last week, it was Mets shortstop Amed Rosario, whose contact skills have taken a huge leap forward in recent months. Today, I’ll evaluate two rookie pitchers who should each get two more starts in 2018 before turning their attention to a sophomore follow-up.

I’m not the biggest Joey Lucchesi fan here at Fantrax, but he’s an interesting play for the stretch run. He’s got one of the weirdest repertoires in baseball. His fastball’s ordinary enough- low 90’s with some arm-side run. It’s got average spin, so it plays pretty flat. Here it is in action. Because of the movement profile, classification systems are split on what exactly it is; Statcast thinks it’s a sinker, while Brooks Baseball pegs it as a four-seamer. No matter, it’s a boring pitch.

His offspeed pitch, though, is another story. About 10-12 MPH softer than his fastball, it drops like a changeup but has glove-side action, instead of the prototype changeup which has arm-side fade. One system thinks it’s a curveball, the other a changeup, and on video, it looks like it splits the difference. Whatever you call it, it works, perhaps because it’s got such a strange movement profile. In the linked video, you can see Wilmer Flores, who has made a living by raking against left-handed pitching, swing through a Lucchesi offering above the zone. His reaction is equal parts frustration and exasperation. It seems like a pitch that hitters should be able to handle, yet they haven’t. Whatever you want to call that pitch, it’s gotten whiffs, the primary reason he’s sporting a 25.8% strikeout rate.

I was initially skeptical, believing that the novelty would wear off as Lucchesi worked deeper into the season, as hitters became more comfortable with the uniqueness of his repertoire. After all, he’s only got two pitches to figure out. Not so, though. Consider his month-by-month whiff rates, from Brooks Baseball, on the offspeed pitch. 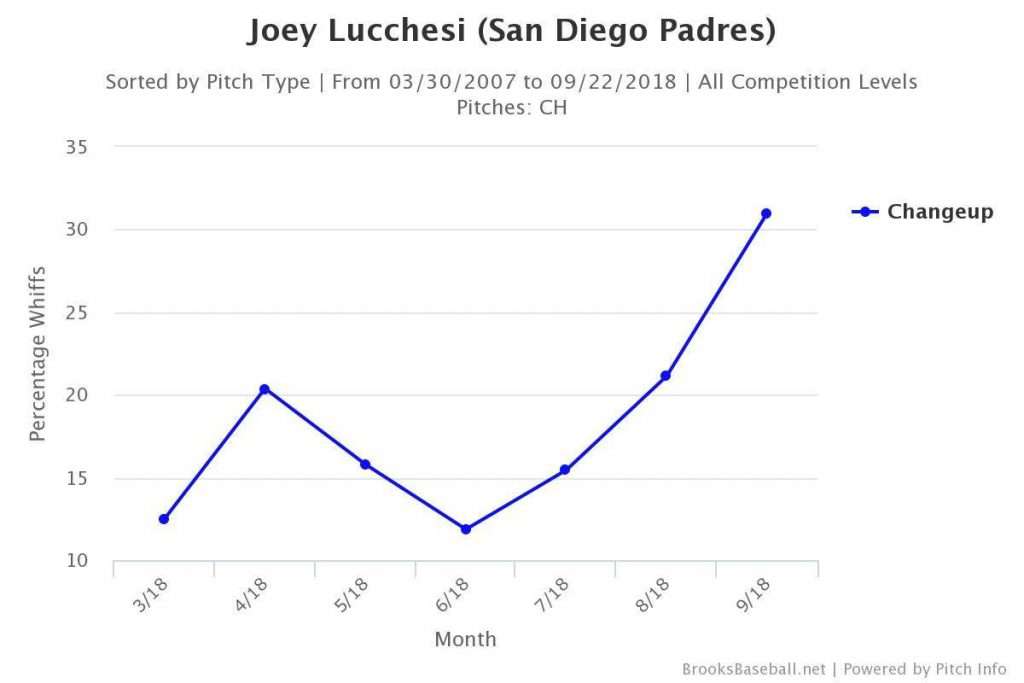 It’s steadily increased. Joey Lucceshi’s gotten more effective with time, and it’s probably time to conclude that hitters aren’t catching on, at least not this year. He’s dominated left-handed hitters all year. Right-handers have given him some trouble, especially in the power department, but here his favorable parks should aid him. His final two outings- in Dodger Stadium on Sunday and home against Arizona next weekend, will see him toe the rubber in parks which suppress right-handed power.

If I were protecting ratios in a daily league, I’d probably stay away against the Dodgers, who are loaded with right-handed power, but owners desperate for strikeouts could roll the dice on Lucchesi, who’s only active in about a quarter of Fantrax leagues right now. That matchup next weekend against Arizona seems especially interesting. Only Paul Goldschmidt and Ketel Marte have really been above-average right-handed hitters for the Diamondbacks this season, and Marte’s making worse contact this month than he has all season. Toss in that Arizona should be eliminated by then, and this looks like a dream scenario.

As for next season, I’m less bullish based on the limited repertoire. Give teams a full offseason to gameplan for him, and perhaps his effectiveness diminishes. He’ll have an opportunity in San Diego; their system is loaded with high-upside pitching, but only Logan Allen seems to have a realistic shot of breaking camp with the club right now. Lucchesi will be in the starting rotation from the outset, and if he can replicate this season’s results, he’ll stay there. Fangraphs’ projections peg him as a 4.00 ERA arm with a strikeout an inning- essentially what he’s done to this point- so that’s certainly not out of the question. I probably won’t be getting him in any Fantrax-only leagues, but I’m more bullish that he can make this weird approach last than I would’ve been even just a month ago.

Miami’s Alcantara is Lucchesi’s foil in many ways. Lucceshi’s a soft-tosser, Alcantara’s a flamethrower. Lucchesi’s got one weird offspeed pitch, Alcantara’s got a prototypical fastball-slider-changeup mix. It’s easy to see why Alcantara was the more well-regarded prospect of the two; he fits the traditional stuff profile. Sure, he’s on the slight side, but sitting at 96 and touching 99 offers a wow-factor that Lucchesi couldn’t match. Long-term, I think I like Alcantara more. He generates whiffs on all three of his pitches, and having just turned 23, he’s got plenty of time to figure things out. Some scouts have long projected Alcantara to the bullpen, and the Cardinals broke him in there in 2017, but Miami has plenty of leeway to give him every chance to fail in the rotation next year. Whatever modest optimism I may have for Trevor Richards, he’s nowhere near Alcantara in terms of upside.

On the other hand, you’d need to be desperate for counting stats to want to run Alcantara next week. He’ll pitch Monday in Washington and likely get another start this weekend in New York. The Mets’ offense has been anemic in Citi Field, so you could throw a dart and hope to hit a bullseye, but it’s a tough sell to promote a player who’s walked nearly a fifth of opposing hitters this year. Despite the high-octane stuff, Alcantara hasn’t put himself in enough favorable counts to rack up innings or punchouts. He’s a good athlete, he’s got great stuff and sometimes pitchers like this pop in their mid-20’s for seemingly no reason. For deep dynasty leaguers, Alcantara would be of intrigue as an upside play. If you’re pushing for a championship, though, don’t be swayed by his small sample 2.35 ERA.