Jay Bruce and Other Hot Hitters Helping Their Stock Early On! 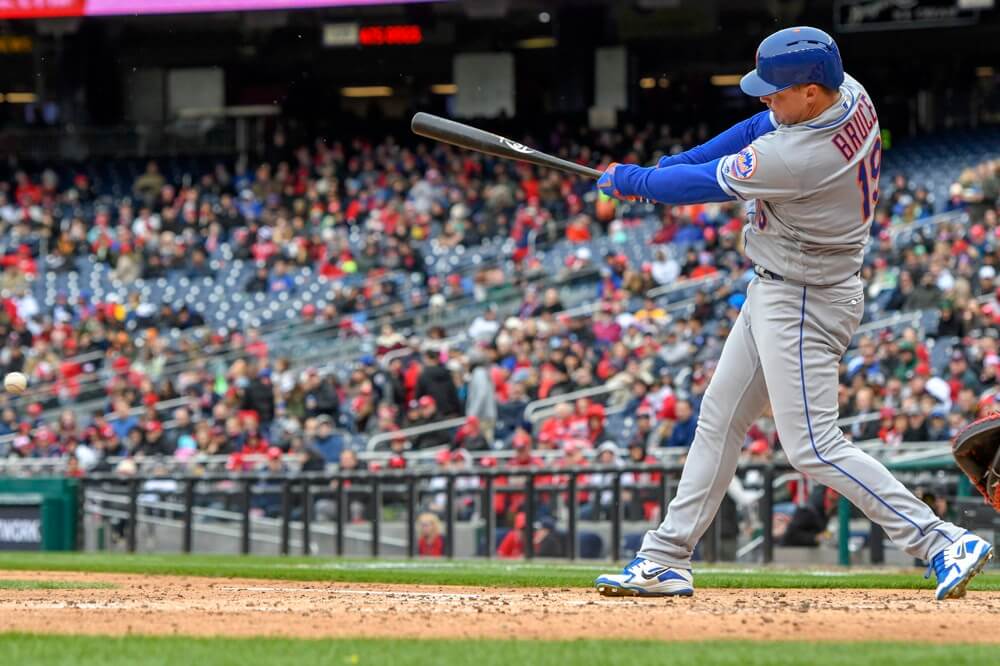 I have spent a lot of time writing about starting pitchers this season, largely because it is easier to quantify any changes they may have made, compared to hitters. But I do not want to totally ignore the hitters! Today let’s look at Jay Bruce and a few other hot hitters and see if we think they can maintain their fast starts.

Will Be Jay Bruce Droppable Once Hot Streak Ends?

There is no surprise that Jay Bruce is one of the biggest surprises in baseball so far. However, I have seen a number of people say that he will be droppable once this hot streak is over. Is that true? Perhaps. But it is oversimplifying things way too much. First of all, the big knock on Bruce so far has been the average. While he currently leads the league with seven home runs, he also has just a .188 average. Well, that is largely to blame on his 0.80 BABIP, the lowest in the MLB. Why is the BABIP so low? Well, Bruce has nine hits this season, with seven of them leaving the ballpark. For those who do not know, BABIP measures balls in play. Meaning that strikeouts and home runs are not included, because the ball in not put in play during those at-bats.

Is Jay Bruce going to keep this home run pace up? Of course not. He is not going to destroy the single-season record. However, as some of those balls stay in the park it will lead to a higher BABIP, which would lead to a higher average. All projection systems project Bruce to have a .260+ BABIP the rest of the way, meaning that he will not be a crutch on your batting average going forward. I ultimately believe that Bruce can hit 30 homers this year, all while hitting about .240-.250.

Bruce had a lost season in 2018 dealing with plantar fascitis, but prior to that, he hit over 30 homers and .250+ in two straight seasons. I am expecting him to return to that level going forward. It also doesn’t hurt that he has a 65.6 percent fly ball rate, the highest in the MLB and a 46.9 percent hard-hit rate to start the season. Those will obviously decrease, but Jay Bruce is once again looking like his old self.

Yandy Diaz has won me over. I wish I drafted him in more leagues and (attempted) to add him in any leagues he was available. The idea when the Rays traded for him was that they would teach him to lift the ball more. The hard-hit rate was already there, at 44.4 percent in 2018 and now at 40.5 percent this season. However, he has already started to see a jump in his fly ball rate. Last season in 120 plate appearances with the Indians he posted a 23.3 percent fly ball rate. That number is up to 32.4 percent in 48 plate appearances so far this season. Additionally, he barreled just four balls last season, while he already has three in 2019.

Diaz made contact at an 85.7 percent clip in 2017, while that number has dropped to 77.3 percent in the early season his strikeout rate is down to just 10.4 percent, while his walk rate is 12.5 percent. To put that in perspective only five hitters (min. 300 PA) had a higher walk rate than strikeout rate last year. Diaz knows how to make contact at a high clip and we are now seeing him lift the ball more to pair with his hard hit rate. Yandy is going to be a big break out hitter this season.

Dansby Swanson is getting gobbled up in leagues and you should not miss out. So far this season Swanson is slashing .324/.419/.765 with four homers and 15 RBI. He is obviously not going to keep this pace up, but there are some early signs to really like. First of all, he has a hard hit rate of 42.9 percent, which builds on his 35.6 rate from last year. He also continues to lift the ball with a 35.7 percent fly ball rate. That is actually slightly down from last year as he had a 37.6 rate then. What to like even more in this early season is he has matured as a hitter, at least so far. His strikeout rate is currently 18.6 percent, which is down over four percentage points from last year, while his walk rate is up to 14 percent, just less than six percentage points higher than 2018. He has chased pitches outside of the zone 24.6 percent of the time this year, which is down tremendously from his 2018 mark of 36.5 percent. While this could be a product of a small sample size, if you look at his career numbers, the only year he has ever over 29 percent was last year, making it look like the anomaly.

This could be just a hot streak to begin the year, but I would not risk it. It may be too late to add Swanson in some leagues, but check your waiver wire just to be safe. I have him in a few leagues so far and have been very pleased with the results.

There are currently seven MLB qualified hitters with a walk rate of 20 percent or higher. Many of them are studs such as Bryce Harper, Mike Trout, Joey Gallo, Rhys Hoskins, and Freddie Freeman. The other two? Yonder Alonso and Maikel Franco. I was very surprised to see this, first as they are not big-time producers. Additionally, neither have ever drawn many walks in their career. Previously, the highest walk rate for Yonder has been 13.1 percent, while for Franco it was 7.8 percent.

Yonder has struggled outside of the walks (and lowering his strikeout rate) but he is going to improve as he currently has a .136 BABIP. He is a solid corner infield option, especially in points leagues if he continues to draw walks at this clip. But Franco is the one to get excited about. He is currently slashing .294/.442/.706 with four homers and just two strikeouts in 43 plate appearances. Franco has never been one to strike out a bunch, but he is being more selective than ever. The 26-year-old former top prospect may be putting it all together. If you have Franco I would hold tight, but if not, I would try to acquire him on the cheap. If he continues to draw walks, limit strikeouts, and hit the way he has been, he will climb up this deep Phillies lineup.