Incoming Freshmen Ready to Make a Fantasy Impact in 2018 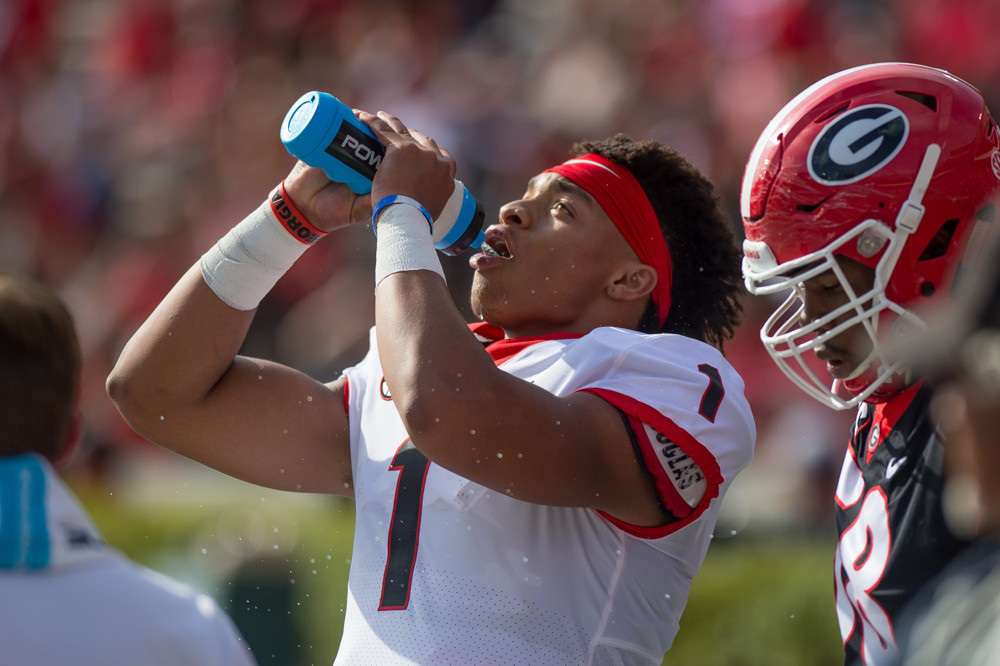 Some freshmen step onto the scene and take over immediately like Adrian Peterson in ’04, Herschel Walker in ’80, and recent Georgia Bulldog Todd Gurley. However, some freshmen aren’t quite at the top spot of the depth chart at the beginning of the season and become household names at the end with AJ Dillon and Johnny Manziel being two of the most recent examples. With college football workouts underway this Summer, let’s look at the incoming freshmen who could make a splash in 2018.

So I don’t waste your time, I’m pairing two of the best quarterback recruits of this century who may both see time at their respective schools in 2018. While neither will start the season off with the starting job, both have the ceiling to takeover in the first half of the season if Kelly Bryant or Jake Fromm start slipping. Both guys are likely top five dynasty selections this year and both could easily be drafted in the mid rounds of upcoming traditional leagues. I can guarantee that one of these guys will get a start sometime during the season but only time will tell.

If only Nebraska had an easier schedule in 2018. The addition of Scott Frost to the Huskers already made the eventual quarterback a flyer pick, now you have a four-star dual threat who put up four touchdowns in the Nebraska Spring Game. Whether Frost comes out and says it or not, Martinez is the unquestioned starter this season and could make things interesting in the Big Ten West if things fall into place. Martinez will likely struggle at times this as he takes on Michigan, Wisconsin, and Ohio State all on the road but if Frost can continue his recent success at a higher level, Martinez could creep into the second or third round in the upcoming seasons.

Camp season is officially over for Nebraska. @NateClouse gives some final thoughts on where things are at with recruiting on this week’s @HuskerOnline Show: https://t.co/qOYvrk0GFa #Huskers

I know, hear me out. East Carolina’s quarterback position was an absolute dumpster fire last season with three quarterbacks combining for a 25:16 TD/INT ratio. Reid Herring is the presumed starter for the Pirates going into the season, but Holton Ahlers could change that in a heartbeat. Ahlers threw for 11,198 yards and 145 yards in his high school career and both of those stats are which are both good enough for third all-time in the NCHSAA.

ECU has thrived in the past with stud quarterback Shane Carden but has struggled to really get the wheels turning on offense without a competent quarterback. Ahlers could be the solution in 2018 and, if he is, be sure to snatch him up quick.

Considered a four-star quarterback in some circles, Kevaris Thomas chose to attend Western Kentucky over South Florida, Florida Atlantic, and Colorado State. Thomas has the capability to run efficiently but prefers to throw and it’s not hard to see why because he threw just two interceptions in 130 passing attempts last season.

Mike White expired his eligibility leaving a gaping hole in the Hilltopper offense where Drew Eckels is expected to be the guy to start the season off against Wisconsin in week one. If Eckels struggles, Thomas is already creeping up on him and might steal the season away. Thomas is a guy that I’m going to draft and stash and if you’re the type to take chances you should too.

Barring a setback in his recovery, Zamir White has great potential to be a stud back for the Bulldogs this season. Georgia had two running backs go for more than 1,200 yards last season and White could be the big compliment to the already established D’Andre Swift in 2018. Expect White to be taken in later rounds of most drafts in 2018 and don’t say I didn’t warn you about this guy after he ran for 7,000+ yards and 119 touchdowns in his four-year high school career.

Miles Sanders is the unquestioned starter for the Nittany Lions going into 2018 based off of experience alone. Ricky Slade might muddy the waters for James Franklin should Sanders struggle early on. Slade is considered the third-best back for the 2018 class behind Zamir White (Georgia) and Lorenzo Lingard (Miami). Slade accounted for 2,785 all-purpose yards and an ungodly 40 touchdowns in 2017 and has already drawn comparisons to Saquon Barkley. I’m taking Slade as a flyer pick later on because he’s certainly not getting the buzz he deserves going into the 2018 season.

Jake Browning’s production took a dip last season with the graduation of John Ross and injuries to Dante Pettis and Chico McClatcher. Pettis is gone and McClatcher is likely to be the little-big man on campus.

On the other hand, there’s Marquis Spiker. Spiker is the most talented receiving recruit that Chris Petersen has brought in during his tenure as the Huskies coach. He already stands out as a 6’3″ big body which is different from the short speedsters we’ve seen play huge roles in the previous seasons. Spiker is an incredible athlete who finished his career with 70 receiving touchdowns and last season with an 83-1,490-27 stat line. His athleticism was seen at other spots as he caught three picks and ran back two kicks. Expect Spiker to make a contribution early and often as the Huskies chase the Pac 12 title.

Taye Barber came out of high school as an athlete, given that he played quarterback at Cypress Springs High School in Cypress, Texas. Barber made headlines for the TCU Horned Frogs in the Spring in his first two days when Gary Patterson said he’s been a perfect child with great speed. Given his short stature and killer speed, Barber could easily take over Kivontae Turpin’s spot should he go down with an injury again in 2018. Barber will likely see time in the return game as well.

It’s not hard to see why a Miami tight end makes this list given the NFL standouts that originated from The U over the years. The tradition was continued last season as Mark Richt still applied the tight end as a key piece of the hurricane offense until Christopher Herndon IV hurt his MCL in the final weeks of the season.

Michael Irvin II hs a shot of being that next guy, but one also has to take into account Brevin Jordan. The Las Vegas product accounted for 1,111 yards and 13 touchdowns last season and could easily push Michael Irvin II as soon as he steps on campus. I would take a shot on Jordan as my second tight end in case he is awarded the job before the season starts.

Also, be sure to tune into the weekly “CFF: On Campus” Podcast featuring Myself, John Laub (@gridironschol91), and Scott Bogman (@bogmansports) on Soundcloud or iTunes.

Ready to add College Fantasy Football to your game? Head on over to Fantrax and start or join a league today.