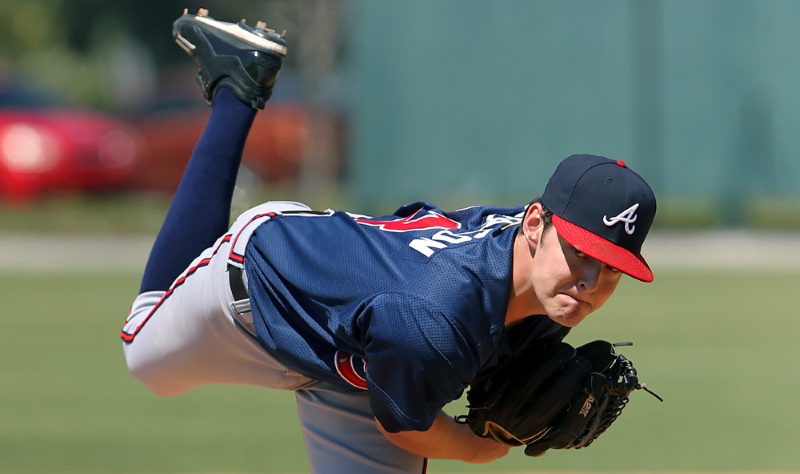 It has been just four days since Fantasy Baseball ended. I miss setting lineups and regularly checking standings. But, playoff baseball is in full swing, and all is right in the MLB.

The 2020 season was nothing short of amazing. Now, it is time to evaluate performances and what to expect from players in 2021 and beyond. Ian Anderson was one of the more impressive rookies to debut. This article will dive into Anderson’s performance and determine how we should value him for the 2021 season and dynasty leagues.

Ian Anderson was one of the few shining stars in the decimated Braves rotation in 2020. A rotation that looked to anchored by Mike Soroka, Max Fried, Cole Hamels, Mike Foltynewicz, and Felix Hernandez saw only Fried make more than three starts. Hamels, Folty, and King Felix, combined for just 6.1 innings after Hernandez opted out, Hamels spent the season injured, and Foltynewicz was DFA’d after only one start. Mike Soroka made three starts before rupturing his Achilles and missing the rest of the season.

Max Fried was the lone bright spot in the rotation until Ian Anderson got the call for his MLB debut on August 26. The former number three pick dazzled in his debut, taking a no-hitter into the sixth inning before giving up a home run to the MLB HR leader, Luke Voit. Anderson finished the game with just one hit allowed while striking out six batters over six innings.

Ian Anderson pitched 32.1 innings in his rookie campaign, ending the year with a 3-2 record, a 1.95 ERA, a 1.08 WHIP, and 41 strikeouts. Those who followed Anderson in the Minor League should not be surprised by his high strikeout total. Anderson consistently posted strikeout rates between 28 and 30 percent. Before we get any further, let’s dive into Anderson pitching repertoire.

As mentioned in the last paragraph, Ian Anderson had quite an impressive debut. A 1.95 ERA over 32.1 innings is strong, even in a small sample. For reference, Sixto Sanchez had a 3.46 ERA in 39 innings. Anderson’s FIP of 2.54 suggests that his performance was excellent. FIP is an ERA indicator that removes defense, luck, and sequencing, making it a stable indicator of how a pitcher performed. Among starters with 30 innings pitched, Anderson ranked seventh in FIP and sixth in ERA. He also ranks well in dERA, an estimator created by Alex Chamberlain. Anderson posted a dERA of 1.82, suggesting the “Should have happened” outcome was better than he pitched!

Anderson’s strikeout minus walk rate of 19.6 percent is respectable and suitable for 36th best among pitchers. Shane Bieber led the league with a gaudy 34 percent K-BB%.

BABIP(batting average on balls in play) is also an important stat when looking at a pitcher. If a pitcher has a low BABIP, it could indicate that they have gotten lucky. Anderson’s .250 BABIP is slightly low, but nothing that screams he is due for regression. Finally, Anderson’s strand rate of 73 percent is right in line with the league average, and his Minor Leauge numbers suggest that he was a little low. These are good indicators that Anderson was

Ian Anderson has long been known for his high strikeout ability. In 2019, only three pitchers in all of the Minor Leagues had more strikeouts than Anderson’s 172. In the small sample of 2020, Anderson posted a 29.7 percent strikeout rate with an 11.9 percent swinging-strike rate. A small concern is that when batters swing at Anderson’s pitches in the zone, they make contact(Z-Contact) 81.4 percent of the time. Fortunately, that number is still better than the league average. The good news is that he limits hard contact and induces a lot of groundballs. But we will discuss that more later.

The last stat I want to look at is CSW(called+swinging strike percentage), a fantastic metric created by Alex Fast and Nick Pollack at PitcherList. You can read in detail about it here. CSW measures how often a pitcher gets a called or swinging strike. With a 30.8 percent CSW, Anderson ranks well and finds himself in the company of some excellent pitchers. Walker Buehler, Luis Castillo, Mike Clevinger, and Blake Snell are other pitchers with similar CSW’s.

Overall, the numbers are encouraging, and you can expect Anderson to post high strikeout numbers throughout his career.

Command and control have always been a struggle for Ian Anderson. If he can take the next step forward, it will go a long way in establishing himself as a high-end starting pitcher. Anderson had his ups and downs in 2020 with his control. In some starts, he commanded the ball well and did not allow a walk. In others, he walked more than a batter an inning.

Anderson did have a slightly higher walk rate than the league average and that is not surprising. Anderson has struggled with walks throughout his career but showed some signs of improvement this season. His O-Swing rate(swings on pitches out of the zone) is lower than the league average which could have positive regression moving forward. Anderson also has a solid first-pitch strike rate of 60.9 percent. It will remain a question if Anderson can get more consistent with his command and control, but it is definitely possible as he matures.

Some notable numbers stand out here in Ian Anderson’s profile. First is his high groundball percentage. Anderson has historically had a high groundball rate in the minors, but his 52.5 percent rate was excellent this season. When you have a pitcher who can keep the ball on the ground and put up high strikeout numbers, you have the makings of an excellent pitcher.

The batted ball profile of Ian Anderson is encouraging. Keeping the ball on the ground and limiting hard contact are crucial features of a successful starting pitcher.

Ian Anderson relies on three main pitches; a four-seam fastball, curveball, and changeup. Anderson’s four-seam fastball is his primary pitch that he uses 46.9 percent of the time. It averaged a healthy 94.1 miles-per-hour and produced a 15.3 whiff rate in 2020. Unfortunately, when it did get hit, it was hit hard for a 93.2 mph exit velocity.

Overall, Anderson commands his fastball well and does not leave it around the belt very often. The lone home run that Anderson allowed was a fastball he left over the plate to Luke Voit. It was his MLB debut, and he was amid a no-hitter, so there was pressure mounting on Anderson. His fastball induced a launch angle of 20 degrees, which is encouraging.

Ian Anderson’s offspeed pitches work well off his four-seam. His changeup is arguably his best pitch. While it does not have a vast velocity difference(7 mph) from his fastball, it plays up well at 87.4 mph. Anderson’s change had a batting average against of .104 and produced a massive 39.8 percent whiff rate and a 31.1 percent putaway rate. This pitch also had 19 of 41 strikeouts. The offspeed pitches are where Anderson also induces weak contact. Anderson’s changeups led to an average exit velocity of 81.4 mph, and hitters beat it into the ground at an average launch angle of three degrees.

Ian Anderson’s statcast data completely backs up the strong performance in 2020. Despite the lack of spin on pitches, it does not stop Anderson from performing at a high level. Several of these stats have been discussed in earlier segments, but several numbers in the statcast profile worth pointing out. First, of 81 batted balls against Anderson, just one was a barreled ball. Anderson’s 0.7 percent barrel-per-plate appearance was the best among starters in 2020.

As mentioned earlier, Anderson also ranks exceptionally well in hard-hit rate. Baseball Savant measures it a little differently than Fangraphs does, which was cited early. Still, Anderson rates very well in hard-hit rate and exit velocity on Baseball Savant. It was briefly mentioned in the pitch mix section how Anderson had a meager batting average against his individual pitches. His overall expected slash line ended up at .184/.239/.234. Anderson’s xBA(93rd percentile), xwOBA(95th percentile), and xSLG(99th percentile) all ranked extremely well among pitchers. Ian Anderson’s statcast numbers only help support his strong 2020.

If he had pitched 170 innings with his 2020 strikeout pace, he would have finished with 217 strikeouts, which is quite impressive.

For 2021, I think Anderson can be a top 50 pitcher and a solid SP3 for Fantasy Baseball. He should produce an ERA between the mid-to-high threes and have a lot of strikeouts. If Anderson can take the next step in his command and control, he could find his way into SP2 territory. The good news, his ADP is likely to be below where I value him. You are likely to get a nice return on investment, depending on where Anderson’s ADP.

As I mentioned, Ian Anderson needs to refine his command and control if he wants to be a high end starting pitcher. What he has done in his professional career and 2020 is nothing short of impressive. But walks and control have always been his downfall. It is important to remember, however, that Anderson just turned 22 years old and has a bright future ahead of him.

At his peak, Anderson has the upside to be a top 20 starting pitcher. There is potential for Anderson to have plenty of seasons with an ERA around 3.30 with high strikeout numbers.  His value has likely risen due to the strong rookie campaign, but you may still have the opportunity to buy at a reasonable price if his owner does not believe in his strong 2020 season.