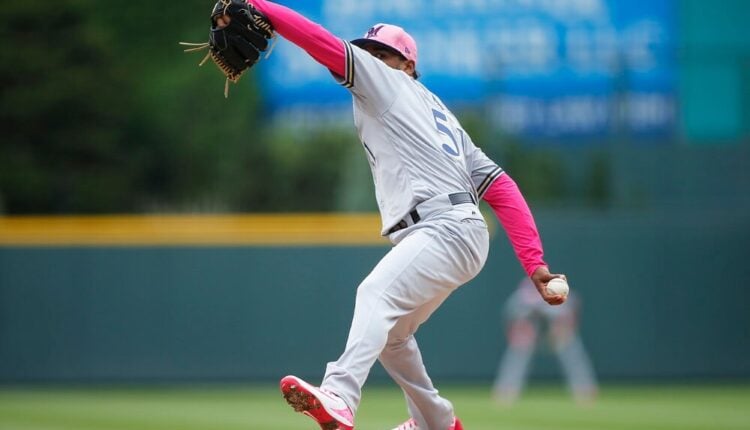 Just had a great experience at First Pitch Florida down in my neck of the woods in St. Petersburg, Florida. One of the breakout sessions was handled by Jeff Zimmerman and he did a great job of covering quite a few late-round pitching sleepers who could be useful in 2020. It’s hard to argue with many of his selections but I’m writing this article with a different slant. I don’t want useful pitchers. I don’t want a few wins and a smattering of strikeouts to go along with a 4.00 ERA. I’m looking for pitching sleepers who could almost single-handedly win a league for me. I want upside, and believe it or not, there are quite a few pitchers even in the late rounds who could deliver.

Pitching is hard to trust and some of the pitching sleepers below will likely fall short, but I pride myself on hitting on a few of these high-upside arms every year. Last year I was all about Brandon Woodruff and Tyler Glasnow. Both dealt with injuries but were lights out for large parts of the season.

Of course, there’s a caveat here. While I love the arms I’m about to mention, they’re not likely to give you 200 innings of elite production. They come with innings limitations, and in most cases, injury concerns. That’s okay with me though. They all come at what I consider a bargain price and we aren’t exactly in the age of work-horse starting pitchers. In fact, only 33 starters threw 180+ innings last year and many of them did it with a 4.00+ ERA.

Instead, I’m looking for quality over quantity in my pitching sleepers. I want high octane stuff with big-time strikeout potential. It’s a lot to ask for but I promise it’s out there and it doesn’t require a huge investment.

Luzardo involves the largest investment of these pitching sleepers, requiring roughly an early 11th round pick in 12-team leagues. Luzardo was all set to join the A’s rotation early in 2019 but missed time with a rotator cuff strain and then a lat strain. He returned late in the season to pitch in six games in relief and showed no signs of wear and tear. Luzardo posted a 1.50 ERA in 12 innings and notched 16 strikeouts. He then added another three scoreless innings in the playoffs.

Luzardo is the rare prospect with both elite strikeout stuff and solid control.  He posted a 10.8 K/9 and 2.0 BB/9 across three seasons in the minors. While it’s hard to trust any rookie pitcher, after watching Luzardo dominate in the playoffs I have zero concerns about his ability to succeed.

The only questions are about health and durability and the innings limit that likely accompanies him early in his career. In fact, in that regard, he is very similar to Glasnow who I mentioned above. If forced, I suppose I would go with Glasnow over Luzardo for 2020, but I don’t think it’s clear cut. They carry a very similar risk and reward, but Luzardo comes at a four-round discount. I’ve grabbed Jesus Luzardo in every draft I’ve done so far and I think I’ll be a very happy man when the 2020 season is done. When it comes to high-end pitching sleepers, I’m not sure I’ve felt better about a young pitcher than I do about Luzardo.

Urias fits neatly into the post-hype sleeper label as well. At one point, he was probably the biggest pitching prospect in baseball, but shoulder injuries have taken some of the luster away. Urias underwent anterior capsule surgery in June of 2017 and pitched a grand total of just over 15 innings in 2018. The Dodgers continued to give Urias the kid-glove treatment in 2019 limiting him to 79.2 innings in 37 appearances with just eight starts. Despite the limited workload, or maybe because of it, Urias excelled, posting a 2.49 ERA with 85 strikeouts.

Urias enters 2019 with a rotation slot virtually assured, and while he likely tops out between 160 and 170 innings at most, they should be very good innings. Pitching half his games in Dodger Stadium, along with plenty of action in pitcher’s parks in San Diego and San Francisco should give Urias a nice safety net. I’m looking for north of 13 wins and close to 200 Ks from Urias in 2020. With so few true workhorses left in the game, stats like that would put Urias safely in that second tier of starting pitchers.

Foltynewicz comes with the longest track record of any of my pitching sleepers having started 117 games in his six-year MLB career. Folty was an All-Star in 2018, posting a 2.85 ERA and a career-best 9.93 K/9 with a decent 3.34 BB/9. ERA predictors said an ERA in the mid 3.00’s was probably more indicative of his performance, but any way around it, 2018 was a breakout performance.

2019 was pretty much a nightmare in comparison. He started the season on the IL with bone spurs, came back to pitch horribly and spent some time in the minors, and then endured a second stint on the IL midway through the season. Things turned around once he finally got healthy. In 57.2 second-half innings, he pitched to a 2.65 ERA with an 8.58 K/9 and  2.65 BB/9.

Foltynewicz likely lacks the ceiling of Luzardo but presents great value at his current 17th round cost. If healthy, a 15-win season with 200+ strikeouts is certainly a reasonable outcome.

I was a bit surprised to see Puk’s ADP in the 230s when just a few weeks ago he had been much further down the list. But then it seemed he would get the fifth slot in the Oakland rotation and the hype train started rolling. That was quickly derailed with the news this week that he is gonna be sidelined for a bit with a shoulder strain. I thought about not including him as one of my pitching sleepers, but right now I’m gonna look at this as a buying opportunity. Puk’s ADP will most certainly start sliding, but the strain is supposedly minor and an MRI showed no structural damage. I would expect Puk to go in the very late rounds of 12-team drafts from this point forward and honestly that makes the obvious risk very attractive.

Remember that Puk was regarded just as highly as Luzardo a few years ago and his minor league K/9 of 12.9 tells us that the stuff is there. The injury news certainly slowed my roll on Puk and you’re not gonna be drafting him as one of your top six starters, but a late-round grab could pay off big later in the season.

Now we’re talking late-round pitching sleepers. Johnson is getting drafted in the last couple of rounds if at all in recent NFBC drafts. I guess everyone remembers all the sleeper hype last year and how James fell flat on his face once the season started.

First, a quad injury and then some shoulder issues turned the first half of the season into a nightmare for James. Those injuries were largely responsible for a 7.36 ERA in March/April and a 5.40 mark in July. All that added up to the ugly 4.70 he ended the season with. Lost in those struggles was a second-half ERA of 3.24 and a strikeout rate of 15.66 K/9, albeit in limited innings out of the bullpen. In that way, he reminds me a lot of Woodruff who was very impressive working from the pen during the later stages of the 2018 season.

James also focused on his mechanics following his shoulder injury last year and on into the offseason. The early returns are good. It certainly appears that the Astros would love for him to claim a spot in their rotation and he could easily reach 200 strikeouts if he gets anything close to 170 innings. James’ command issues make a low WHIP unlikely but the wins and strikeouts will pour in if shows any semblance of consistency.

If Luzardo is comparable to the current day Tyler Glasnow, then Peralta has clearly mirrored the early years of Glasnow. Peralta has electric stuff but the walks have killed any chance he’s had to produce value. But one thing has my spidey senses tingling.

The Brewers just signed him to a new five-year contract showing that they believe in him. It also makes me believe he’ll have every chance to earn that money. There’s every chance that I’m being sucked in by another high-upside strikeout pitcher who will go on to break my fantasy heart. So what! You can’t win in love if you don’t play the game.

Evidently I’m not the only one playing the Freddy Peralta game. Lance Brozdowski also seems impressed with the recent results.

The sample we have of Freddy Peralta throwing his slider:

He has 19 strikeouts to two walks. That's a 49% strikeout rate to a 5% walk rate across four appearances.

And here’s a look at Peralta’s new slider overlaid with his fastball.

Slider was a 3-2 whiff to Castellanos. 🔥⚾️ #Brewers pic.twitter.com/6ugyGxZRQD

Many would refer to Peralta as a risk/reward type of pitcher, but honestly, where’s the risk? A reserve-round pick you can keep on your bench until he proves he’s for real? For me, Peralta epitomizes exactly what I’m looking for in my late-round pitching sleepers. I pass by a few mediocre inning-eater types and get the chance at a 220-strikeout pitcher? Sign me up!

Are you buying in on any of these high-upside pitching sleepers? Share your thoughts in the comments below.