Heating Up or Benchwarmer: Trent Grisham and Eugenio Suarez 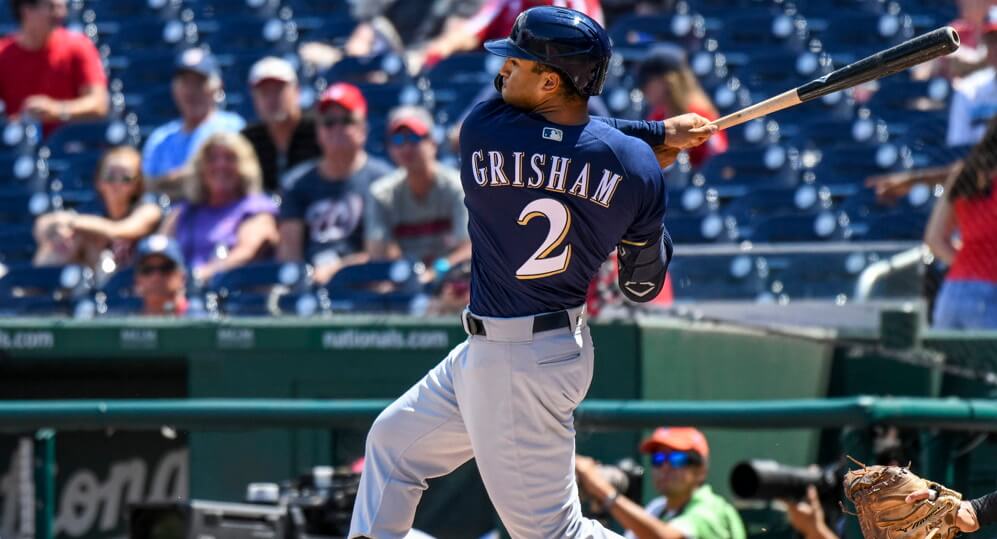 The fantasy baseball season has been quite a rollercoaster with injuries, COVID-19 concerns, and hot/cold streaks. With over a week of baseball completed for most teams, we’ll answer this question – are they heating up or a benchwarmer? For this article, we’re digging into two hitters that may be heating up or benchwarmer material. Sure a week or so might be a small sample, but we’ll need to make quick decisions in a shortened season. If you’re looking for hitters to replace for a benchwarmer, then look no further than the waiver wire article by Eric Cross up on FantraxHQ.

Heating Up or Benchwarmer

When looking at his batted ball data, there’s a slight increase in line drives, a drop in ground balls, and a spike in fly balls. He’s also pulling the ball much more. Last year he pulled the ball 37.8% of the time, and this year his pull rate is up to 58.3%. Let’s take a look at the batted ball changes so far.

I also noticed his O-Swing rate dropped from 22% last year to 8.8% this season, but his O-Contact rate is up almost 9% from last year. He’s typically made a ton of contact, and his 84% contact rate is also up about 8%. Also, Grisham’s swinging strike rate has dropped down to 4.9%, which shouldn’t be surprising because his plate discipline is a strong suit.

His Statcast data also changed from last season. Grisham’s 92 mph average exit velocity went up from 87.2 mph in 2019. His 24.2-degree launch angle is up from 16 degrees last year, and that makes sense with the increase in fly balls. Grisham’s 33.3% hard-hit rate is close to his 34.6% last year, but his 16.7% barrel rate is significantly up from his 5.4% last year. His .413 xwOBA is also up and currently ranks in the 77th percentile, which makes sense with the improved quality of contact so far. The improved quality of contact for Grisham helps us decide whether he’s heating up or a benchwarmer.

Since his pull rate is much higher this year, I’m curious to see how that affects him when teams shift as they typically do with pull heavy left-handed hitters. According to Statcast, Grisham faced a shift 29.3% of the time last year compared to 60% of the time so far this year. Initially, I figured if teams were shifting more, then he may struggle against the shift. When teams shift, Grisham has a .492 wOBA that’s significantly higher than his .305 wOBA when there is no shift. There were similar trends last season where he had a .372 wOBA against the shift and a .290 wOBA with no shift.

Grisham is Heating Up!

So is Grisham heating up or benchwarmer material? Like in NBA Jam, Grisham is heating up! If you’re in a trading league, then buy high on Grisham because he could be in for a breakout year if he sustains and continues these changes. The one area of slight concern would be the jump in fly-ball rate and launch angle, but it could just be a small sample. If you have Grisham on your team, then ride the wave and enjoy it.

The other day I checked one of my teams and noticed Eugenio Suarez. To say he’s struggling would be an understatement. He’s currently hitting under .100 to start the year with zero home runs and only one double. So far this season, Suarez is slashing .094/.237/.156 with no home runs, three runs, and two RBI with a 13.2% walk rate and a 28.9% strikeout rate. Even his 13.2% walk rate isn’t helping his OBP stay afloat, and it’s worrisome to see his slugging percentage below his OBP.

Like Grisham, the batted ball data for Suarez is different, but not necessarily in a positive way for Suarez. His line drive rate is down to 14.3%, and his ground ball rate is up to 38.1%. Last season Suarez had a 21.7% line drive rate and a 36% ground ball rate. His 47.6% fly-ball rate is up 5%, and his 29.5% HR/FB looked a bit unsustainable last year. On Fangraphs Suarez’s 19% hard-hit rate is quite staggering when he typically hovered in the 46-48% range. Keep in mind that Fangraphs uses a different method to calculate hard-hit rates, but that’s a dramatic difference so far.

Suarez’s Statcast page shows a lot of blue, which may be one way to figure out if he’s heating up or benchwarmer material. His 88.1 mph average exit velocity dropped 1%, and his 38.1% hard-hit rate dipped almost 3% from last season. Not surprisingly, Suarez has two barrels with a .266 xwOBA that ranks in the 12th percentile. Sure it’s a small sample, but even Suarez’s expected stats are in the 3rd percentile or lower with a .156 xBA and a .287 xSLG.

Suarez is (Almost) a Benchwarmer

Is Suarez heating up or benchwarmer material? Since Suarez had an ADP inside the top-100, it may be hard to bench him unless you have better options. I think Suarez is almost a benchwarmer. His plate discipline is about the same, but the drop in line-drive rate is worrisome. Suarez is also not hitting the ball hard, if at all.

Hopefully, Suarez will heat up soon with his track record of success. Monitor Suarez’s batted ball data because we’re closing in on the stabilization point for metrics such as average exit velocity. See Max Freeze’s article about stabilization rates for various fantasy baseball metrics. Don’t trade Suarez since his value is low, and give him one more week or so because he showed better quality of contact in 2018 and 2019. It’s hard to bench him with so many injuries and COVID-19 concerns unless you grabbed Kyle Seager or Colin Moran off waivers.

MLB is in chaos right now. Stay on top of the latest changes with our Starting Pitcher and Closer Rankings!