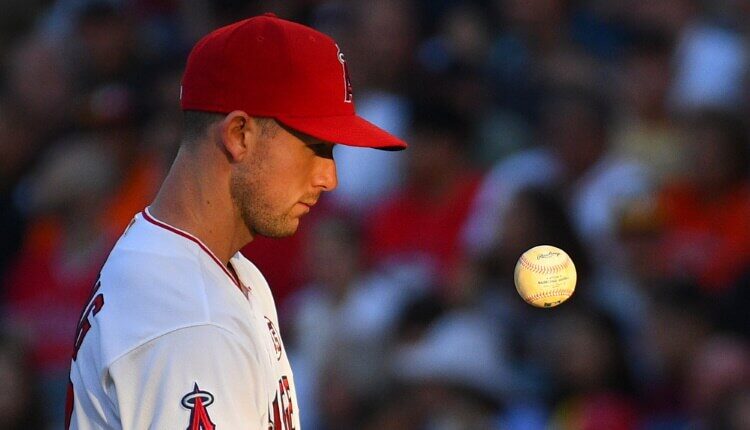 Last week, we looked at three pitchers with increased slider usage. Now, we’re diving into Griffin Canning’s stuff and Taylor Hearn’s pitch mix change. Canning dealt with multiple injuries throughout his career, but Canning’s arsenal drew us in. Hearn made a pitch mix change after building upon a small sample in 2020. Once again, thanks to @DynastyOneStop for helping me identify pitchers with pitch mix changes. If you’re itching for a fantasy baseball league, head over to Nathan’s website for redraft, best ball, and dynasty formats on Fantrax.

Throughout Griffin Canning’s career, he battled injuries. In July 2021, a lower back strain led to a stress fracture in August, which ended Canning’s season. Then in 2020, Canning dealt with an elbow injury that surprisingly didn’t end with surgery after multiple medical opinions. In early 2020, Canning received injections for the discomfort in the right elbow, which seemed concerning, especially since elbow inflammation ended his 2019 season via the 60-day injured list. 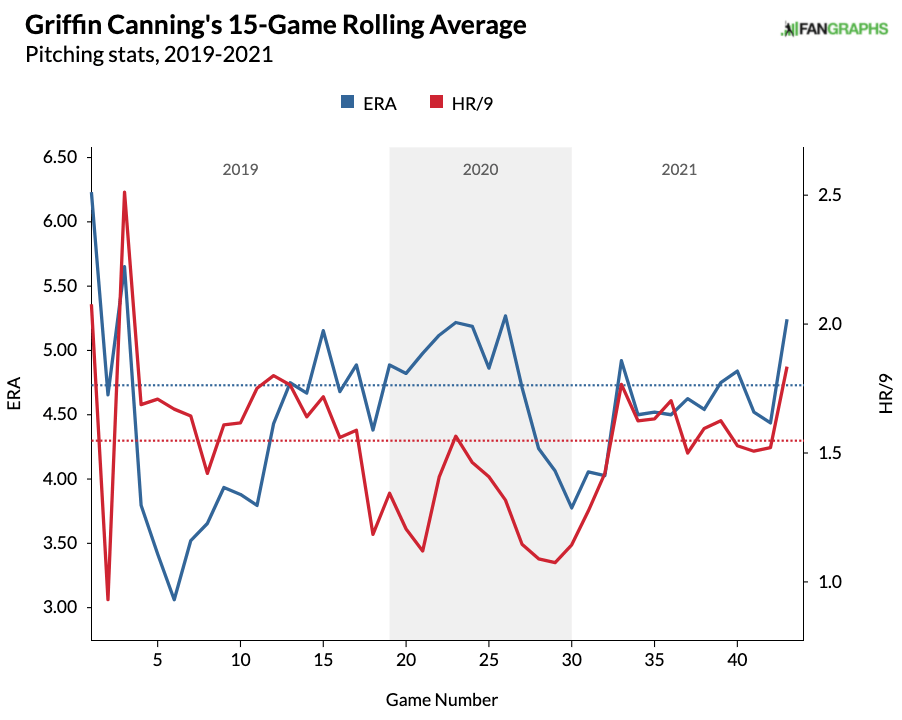 Interestingly, Griffin Canning added a cutter in 2020 then ditched it in 2021. With that, Canning’s changeup usage increased one percent, and the slider increased over four percent. It’s not a significant pitch mix change, but we’re interested based on Canning’s stuff. 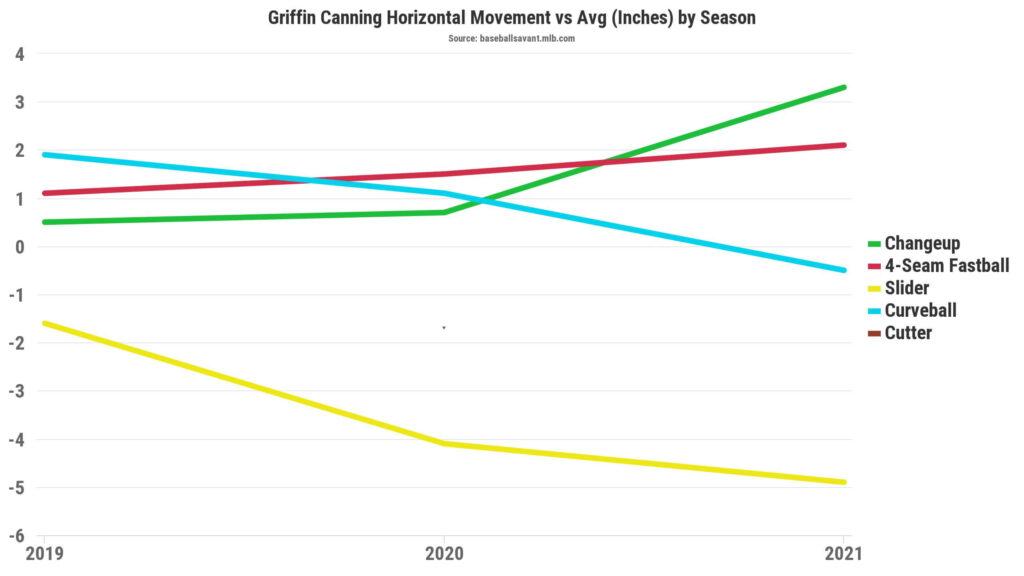 Overall, Griffin Canning mixed in four pitches at a double-digit rate with the slider as the best pitch, evidenced by the career 19.2% swinging-strike rate, .382 SLG, and .287 wOBA. Over the past two seasons, Canning’s slider possessed above-average vertical movement with three inches more than the average in 2021. In 2020, that sat at 4.6 inches versus the average compared to some below-average drop in 2019. That’s positive as it translates into whiffs. 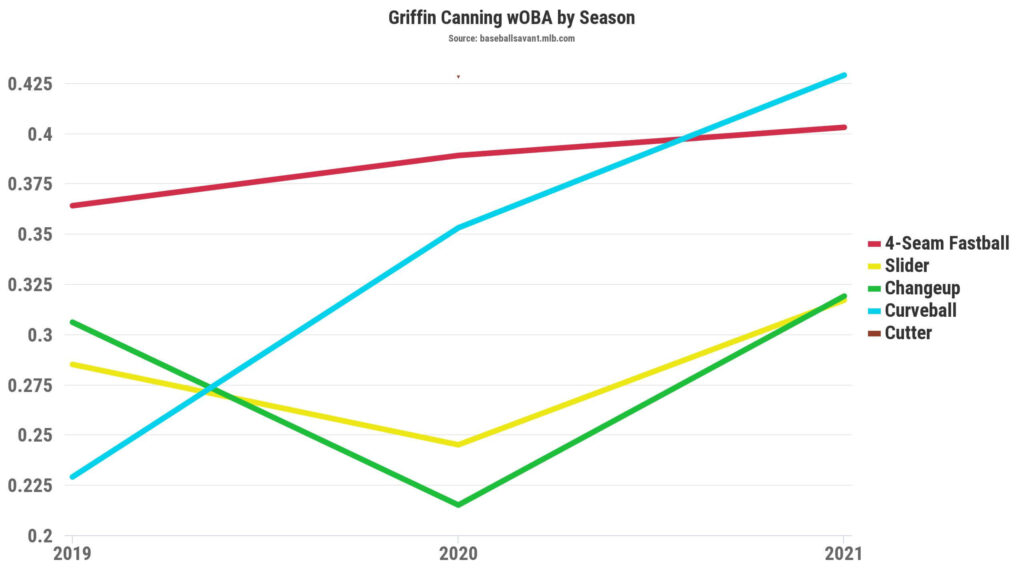 The NFBC ADP market indicates Griffin Canning should be more of a waiver-wire pickup in 15-team leagues than a draft target. We have question marks surrounding Canning’s role with the addition of Noah Syndergaard and Michael Lorenzen. The Angels will likely use a six-man rotation, but Canning’s stuff should beat out José Suarez and Jaime Barria. Overall, Canning possesses three pitches with above-average movement, plus the slider and changeup eliciting swings and misses, meaning the stuff is good.

Taylor Hearn popped via the spreadsheet (thanks to @DynastyOneStop) with the increased fastball usage. Honestly, it’s probably better to see a dip in fastball usage for a pitcher like Taylor Hearn. Keep in mind fastballs include four-seamer, two-seamers, cutters, and sinkers, according to Baseball Savant. Hearn remained available in a free agent and First-Year Player Draft in a 30-team league, and it’s probably for good reasons.

Unsurprisingly, Taylor Hearn’s fastball velocity sat higher as a primary reliever with 95.4 mph from April to July 22. That dipped to 94.1 mph on the fastballs from July 25 to September 29, primarily as a starter. The ERA and WHIP looked similar, but Hearn’s LOB% dropped. Overall, the pitch mix remained the same, but the K-BB% dipped later in the season – not a positive trend.

Taylor Hearn relied on the four-seamer (46.2%) and sinker (21.7%), plus the slider at 20%. Hearn introduced the sinker with only one thrown in 2020 but used it heavily in 2021. Theoretically, the 12.2% changeup usage should help keep righties off-balance with 209 of 210 changeups thrown against right-handed batters. Unfortunately, the changeup isn’t mind-blowing. 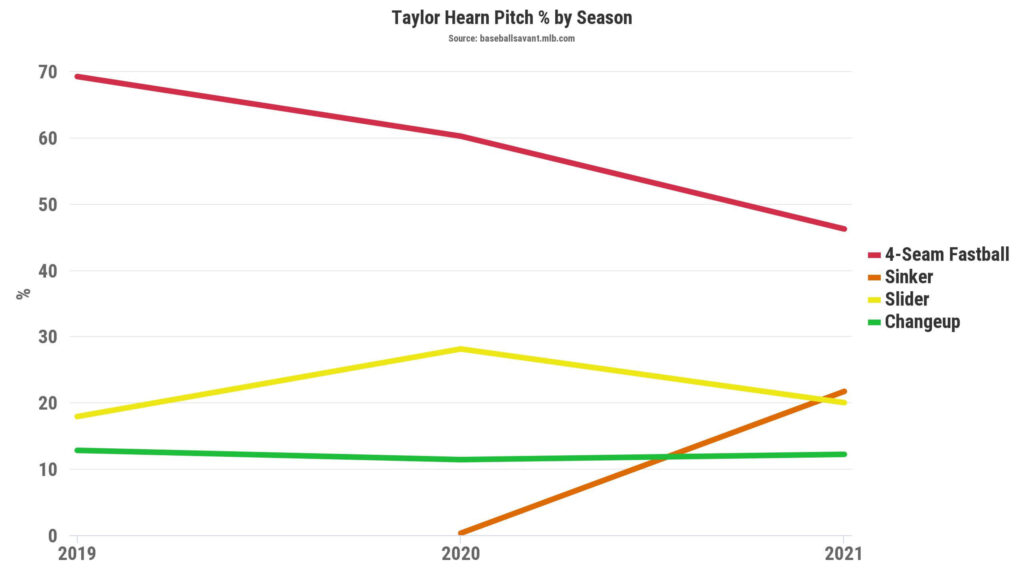 Although Hearn’s four-seamer finished as his best pitch from a -7 Run-Value in 2021, it doesn’t stand out movement-wise. However, Hearn’s four-seamer elicits a 9% swinging-strike rate and .315 wOBA. It doesn’t get a ton of vertical movement with only 0.1 inches versus the average. Over time, a fastball-heavy approach that lacks above-average movement probably isn’t sustainable unless you’re Lance Lynn, a crafty pitcher. In recent seasons, Lynn also showed the ability to limit contact quality.

Interestingly, Taylor Hearn thrived in the heart and shadow areas of the zone. Hearn pounds the zone with the four-seam and sinker with a Zone% over 58%. Those pitches don’t overpower hitters, but they’re serviceable.

The research on Hearn started with the increased fastball usage, and it ended as a deep look into Hearn as a risky streamer. Per Baseball Reference, Hearn led Rangers pitchers in runs support per game at 4.5, tied with Jordan Lyles. The Rangers averaged 3.9 runs of support per game, with the league average at 4.7. Maybe the improved Rangers offense will provide run support for their pitchers in 2022.