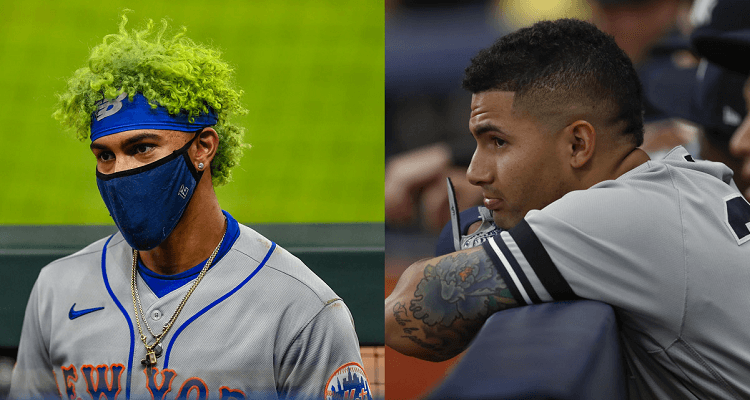 Coming off arguably the weirdest and most frustrating baseball season in many years, the 2021 season was bound to be better, right? Wrong! We’ve dealt with plenty of injuries and poor performances from our star players, with two major underperformers both playing shortstop in the most populated city in the United States. Both Francisco Lindor and Gleyber Torres have been downright terrible this season, leaving fantasy managers with a bad taste in their mouths due to the high draft pick needed to secure each of them. Today, I’m going to take a look into what has gone wrong for each and how they should be valued moving forward.

If you wanted Francisco Lindor on your fantasy team this year, you needed to have a draft slot late in the first round. Lindor wasn’t usually being selected in the first round but his 18.51 ADP from 1/1/21 to 3/31/21 indicates that you needed to use an early to mid-second-round pick on the stud shortstop. As someone that has never been 100% buying Lindor at his price tag, I, fortunately, didn’t have any shares this year. Man, I really dodged a bullet on this one.

To say Lindor has underperformed this year is the understatement of the century. Through games on Sunday, Lindor is currently slashing .191/.293/.290 with four home runs and four steals in 190 plate appearances. It’s okay, I’ll wait for a second while you empty the contents of your stomach. Has he been unlucky? Is the weight of playing in a big market getting to him? Let’s take a look.

When looking at Francisco Lindor’s plate discipline metrics, there’s nothing that really jumps out as concerning. Sure, there’s been a 4.5% drop in his zone contact rate, but his chase contact is up and whiff rate nearly the same as 2020. On top of that, Lindor has posted the highest walk rate of his career this season at 11.6%, up 2.2% from his previous career-high of 9.4% in 2018. That’s really been the story for Lindor this season. He’s been more passive at the plate which has affected his power in a big way. But we’ll get into that below.

Lindor has also been struggling against pitches in the upper half of the strike zone. And with pitchers attacking up with fastballs more frequently these days, this has become an issue for Lindor.

As you can see above, there’s a lot of blue zones in the upper half with most of his best zones coming lower. But does this equate to a massive drop in AVG down to .191? Not really. Yes, Lindor has been bad this season, but he’s also been a bit unlucky. Lindor’s .206 BABIP is the 3rd lowest mark in baseball among 147 qualified hitters. Only Jackie Bradley Jr and Eugenio Suarez have lower BABIPs than Lindor. Furthermore, Lindor’s xBA is .225, which still isn’t great but shows that he’s been a bit better than his .191 average would indicate. I’m anticipating a rebound in the AVG department to a degree, but Lindor’s quality of contact metrics are a bit worrisome as well.

While Lindor is still hitting the ball just as hard as he did in 2018-2020, his more passive nature, along with a lower barrel rate and launch angle all combine for the power outage he’s experiencing this season. A part of Lindor’s overall production has always been volume-based with him leading the league and surpassing 700 PA in 2017 and 2018. Lindor was a player I worried about more than others with the new, “less bouncy” baseball this season. The players that had great quality of contact metrics have done fine for the most part, but the players like Lindor with mediocre metrics have been the ones suffering. It also doesn’t help that Lindor’s ground ball rate has increased 10.7% while his line drive rate has decreased 11.2%.

Even when Lindor was at his best, his quality of contact metrics were nothing special. At best, Lindor had a 69th percentile hard-hit rate (2018), 71st percentile barrel rate (2018), and 82nd percentile average exit velocity (2019). Those metrics have been sliding the last couple of seasons too, even before 2021. So, it’s fair to wonder if we’ll ever see peak Lindor again or if those days are firmly in his rearview mirror. That might be hard to say as he’s still only 27 years old, but Lindor’s metrics don’t suggest a return to 30-plus homers as he hit every season from 2017 to 2019. Moving forward, he’s likely more of a 18-20 homer bat that can still get into the low-20s if the high volume or plate appearances are there.

It hasn’t just been at the plate where Francisco Lindor has been regressing. He’s been consistently slipping in the speed department as well. Back in 2015, Lindor had a sprint speed of 28.5 ft/sec and his home to first time was 4.27 seconds. Now in 2021, those have regressed to 27.7 and 4.39 respectively. These numbers don’t usually get better as players get into their 30s. So, just like with Lindor’s power, we need to wonder if his 20+ steal days are gone as well. This season, Lindor is on pace for around 15 steals and has 10 combined in his last 104 games with a 70th percentile spring speed this season. Again, that’s good, but not what we had come to expect from Lindor.

It’s apparent that Francisco Lindor isn’t as bad as he’s shown, but we also shouldn’t be expecting a return to his 2017-2019 levels either. At this point, Lindor profiles more as a .260-.275 hitter with 18-20 homers and 12-15 steals annually. That would still put him as a top-10 shortstop, but not top-5 anymore. And certainly not a top-2 round selection. At this point, I doubt that Lindor is anything more than a back-end top-50 dynasty option. With that said, it’s hard to sell him right now given his current struggles. I’d recommend waiting until he heats up a bit before selling.

If you thought things were bad with Lindor, you just wait until we dig into Gleyber Torres. The former top prospect and heir apparent to the immortal Derek Jeter has seen his production fall off a cliff in 2020 and 2021 after two promising seasons to begin his career in 2018 and 2019.

For an early-round draft pick in 2020 and top-100 ADP in 2021, Torres has basically been unusable in fantasy for two straight seasons now. A quick glance at the stats above will show that his plate discipline has improved, but the power has gone MIA.

As mentioned, the one area of Gleyber Torres’ profile that has improved is his plate discipline. After posting an 8.3% walk rate and 23.1% strikeout rate through his first two seasons, Torres has improved those already solid rates to 12.5% and 18.4% respectively. That’s the 25th best BB/K ratio since the start of 2020 for the 182 players with at least 300 plate appearances.

While his contact metrics are still league-average or a hair below, Torres has cut his chase contact rate drastically over the last two seasons and has consistently trimmed his whiff rate, down to a career-best 26.2% this rate. But even with him improving in the whiff rate department, he’s still slightly below league-average there as well. The improvements overall should help Torres keep his batting average respectable, and he gets a slight boost in OBP leagues, but his quality of contact metrics are a major issue.

Yes, that statement is true and is one I’ve seen countless times on Twitter. It’s also a bit deceiving though. As we all know, Torres beat up against the Double-A caliber pitching that Baltimore ran out there that season. In 18 games against the Orioles that season, Gleyber cranked a ridiculous 13 home runs. That serves as 19.4% of his career 67 home runs in just 5.1% of his games played. In his other 335 games, Torres has hit 52 homers for a 23-homer pace over 150 games. That number has gotten much worse in 2020 and 2021. Since the start of the 2020 season, Torres has a mere five home runs in 86 games which is a 150-game pace of 14 home runs. So what type of power hitter can Torres be for us moving forward?

Even during his first two seasons when he was impressing us, Torres wasn’t lighting up his Baseball Savant page with red. In fact, he’s never been in the top half of the league in average exit velocity or hard-hit rate. Now, he’s in the bottom 20 of the league in both and the bottom third of the league in xSLG, xISO, and barrel rate as well. Simply put, his quality of contact metrics are mediocre at best. Without big power, Torres isn’t a top-100 player. Could these metrics bounce back? Sure. But even if they bounce back, to what degree will that be? Back to middle of the road? Playing in Yankee Stadium should help, but with this profile, it’s difficult for me to see Torres returning to 25-plus home runs. A consistently decreasing flyball rate doesn’t help either.

At this point, I strongly question if Gleyber Torres is even a top-100 player anymore. As someone that provides little in the speed department, Torres has to stand out at the plate and his profile doesn’t give me any confidence that he can be that impact bat. His plate discipline metrics are fine and should allow him to continue hitting in the .250 to .275 range, but that type of average with 15-20 home runs and a handful of steals isn’t all that valuable. At least, not as an early-round asset. Torres has fallen outside of my top-100 overall and will be closer to 150 overall if this type of performance continues. He’s still only 24, so it’s far too early to write him off, but the narrative and expectations need to be adjusted here.