The Next Generation of Five-Category Hitters for Fantasy Baseball 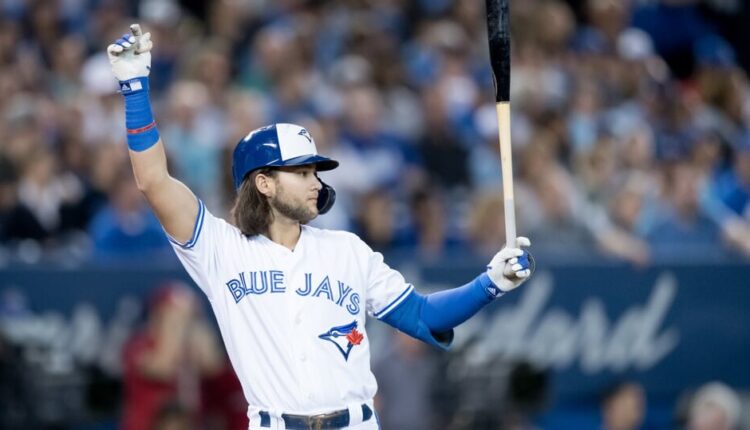 What is a five-category hitter in fantasy baseball? We all hear it year-in and year-out, but do we have a rational definition? In obvious terms, it is a player who excels in the five primary hitting categories in rotisserie leagues: batting average, runs scored, home runs, runs batted in, and stolen bases. These players are the most important players to any fantasy team. They are the only players who can positively influence five different categories. Hitters who can’t steal bases, hit home runs, or hit for average can only benefit you in four categories. Pitchers only four (there aren’t any pitchers getting wins, saves, and strikeouts above league average). No one affects the game more than these fantasy titans.

But what is that threshold for a player to be considered a five-category hitter? We can’t be too nitpicky here, but nonetheless, the next section will dive into that very threshold, followed by which players have accomplished the feat each season since 2019.

When a player is referenced as a “five-category hitter”, which definition would you chose?

1️⃣ A hitter who didn’t hurt you in any category

2️⃣ A hitter who was above-average in all categories

3️⃣ A hitter who was good in all categories

Above you see a Twitter poll asking which definition is synonymous with a five-category hitter. It is obvious that there is a rift in the community. 50-percent of the voters said a hitter had to be “good” in all five categories. Right behind it, coming in at 44-percent was “above-average” in the same said categories. And here lies the issue, we don’t have a universal definition. In fact, there isn’t even a constant definition for “good” and “above-average” for each stat! Ugh. To avoid prolonging this article further, our thresholds need to be decided, trying to blend in the community definition of an “above-average, yet good” threshold for each category.

First, all stats were compiled in the 2019 and 2020 seasons among the 300 hitters with the most plate appearances for each season. A z-score was then assigned to each corresponding statistic. Then, to make it more easily understood, that z-score was converted into a percentile. Using those percentiles makes the definitions of “above-average” and “good” more visible.

Above-average is any number above the 60th-percentile in each individual category. Here are those numbers in 2019 and 2020:

Looking at those numbers, above-average doesn’t look like the ideal fit for this topic. Particularly looking at the 2019 numbers, those players who provided that bottom-line wouldn’t have truly lifted a fantasy team. The numbers are respectable for a utility slot, but this isn’t a five-category player. Naturally, the next move is to go to the good threshold. For this exercise, “good” will be defined as any number above the 75th-percentile. Here are those numbers in 2019 and 2020:

First, if this doesn’t make 2020 stand as an outlier year, I don’t know what will. The fact a .271 batting average was 75th-percentile is eye-opening. This is why the 2019 numbers need to be prioritized when examining numbers. A .281 batting average simply feels right. With that said, this is all relative to the rest of the field, so we will use the numbers above for both seasons.

These numbers are strongly preferable to our initial numbers. Finally, we have our thresholds. This will be the universal cutoff line for this article. It doesn’t have to be accepted by the community, but the quibbling is done. Now it’s time to look into the players who achieved this accomplishment, along with the players who just missed out since 2019. 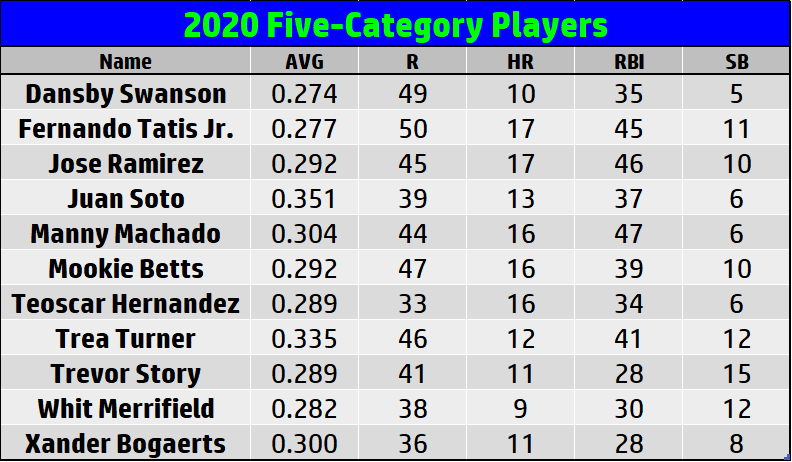 There we have it, the official list of players that have accomplished this rare feat. In 2019, there are mostly big names that we all know as the premier players in this league. That includes Christian Yelich, Cody Bellinger, Juan Soto, Mookie Betts, and Trevor Story. Austin Meadows had himself a fantastic 2019 season and just met the stolen base threshold to qualify among these elite hitters. Then there was Danny Santana. How soon we all forget how good Santana was in 2019. While the only category he was truly strong in was stolen bases, he met the thresholds everywhere else. That was fun while it lasted.

In 2020, there were 11 players to make the list, which was four more than in 2019. There were three repeats from 2019: Juan Soto, Mookie Betts, and Trevor Story. Not surprisingly, these three players are all going in the first round of 2021 drafts. Manny Machado, Jose Ramirez, Trea Turner, and Whit Merrifield all had rejuvenated shortened 2020 seasons. Xander Bogaerts found his youth, doubling his stolen base totals from 2019 in one-third of the season. Dansby Swanson somehow made the list with a .274 batting average (the odds of this qualifying in 2021 are very slim). And then there were the young breakouts in Fernando Tatis Jr. and Teoscar Hernandez. While Tatis Jr. is here to stay, it will be interesting to see what Hernandez does in 2021 with a full sample.

Quite an exciting list of players across both seasons. These select few made more of an impact on fantasy teams than arguably any other player in the game.

Now that we have the qualified players, which players just missed the cut? Who was a few steals, runs, home runs, or RBIs away?  Take a look below: 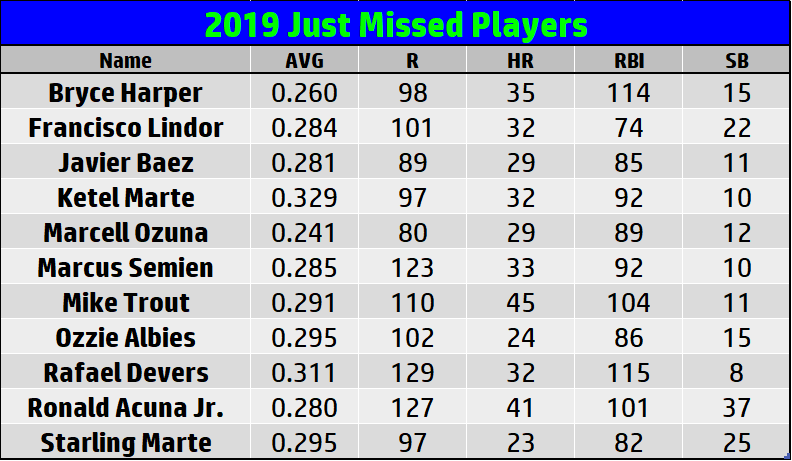 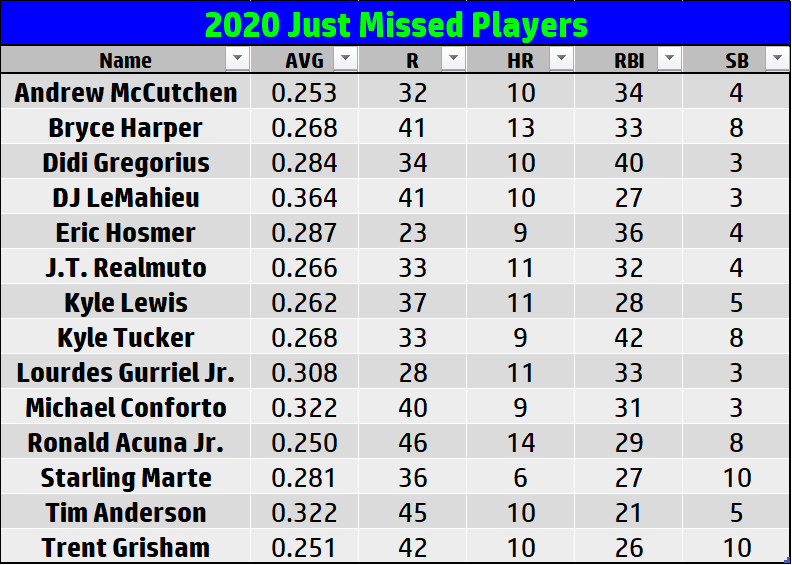 Once again, we have a big-time list of players here. Three players made both lists twice: Ronald Acuna Jr., Bryce Harper, and Starling Marte. Each player has recognizable issues across both seasons.  Marte doesn’t seem to have enough power in his bat to join this elite company. Acuna and Harper struggle to hit for a high enough average. Acuna was one-point away in 2019, and Harper was three points away in 2020. While that is obviously too nit-picky, the rules, are the rules.

The rest of the players on the list just missed for a variety of reasons, but they will have an opportunity for redemption heading into 2021. Let’s dive into those potential five-category hitters for 2021.

Highlighted below are early-round studs, along with a tiered breakdown working the way down to late-round hitters who have an outside shot at returning five-category totals. Players going toward the end of drafts likely won’t return these numbers. However, they possess the tools, and potential playing time, to join the the rare cohort that is the five-category stud. Here are those potential players heading into 2021.

These players don’t need much of an introduction. Simply put, there’s a reason you will see them go in round one or round two in rotisserie leagues. This group of uber-talented individuals give their owners the highest chance of return on a five-category player. If these players come across your draft slot, take them. It’s as simple as that.

Here are young players that look to have a direct path to accomplishing the five-category feat. Bo Bichette is the likeliest player of this group to come out on top in 2021. Hitting at the top of a stacked Toronto lineup should only increase his value. The only question with him will be if he gets enough RBIs.

Luis Robert, Keston Hiura, Kyle Tucker, Kyle Lewis, and Trent Grisham all have the power and speed necessary, but can they provide the batting average? Ozzie Albies is a well-rounded player who can threaten any category, but he needs to figure out how to take the next step to greatness. Dylan Carlson and Randy Arozarena are super exciting prospects, but do we truly know enough about either yet to expect this return? Regardless, these players are sure to bring plenty of excitement to their owners.

Here is an intriguing group of players. They are not quite high-round picks, but high enough that we understand these guys have skills. Byron Buxton and Yoan Moncada are former No. 1 overall ranked prospects who have had up-and-down careers to date. Buxton enjoyed quite the successful 2020 season after struggling to stay on the field every season prior. Moncada was on the opposite end of the spectrum, seeing his stock plummet after a brutal year. Both have the tools to produce elite totals across the board.

Javier Baez and Teoscar Hernandez are the free-swinging tandem that are the true definition of “all or nothing”. Both are hitting in good lineups near the heart of the order. However, can they sustain a batting average, and garner the steals, to group them with the elites? Ketel Marte had a breakout 2019 season where he was nearly a five-category stud, falling short in the steals department. Despite having enough speed, Marte doesn’t seem to run often enough. However, the potential is there if he decides to start running. Lourdes Gurriel Jr. has the same issue as Marte, his base-stealing totals should be questioned.

Shots in the Dark

While this isn’t a big section, there’s a reason for that. Players going late in drafts rarely have a path to this type of success. The above few are long-shots at best, but there is the smallest glimmer of hope for each. Sam Hilliard not only needs a full season’s worth of at-bats, but he also needs to cut his strikeout rate in order to raise his batting average. Nick Senzel and Scott Kingery need to stay healthy. Both were elite prospects, who have everything you want in a hitter. Austin Hays has sneaky good upside. However, he not only needs to show he can hit for power, but he needs to show he can consistently steal bases. He has the raw tools, he just needs to put it all together.