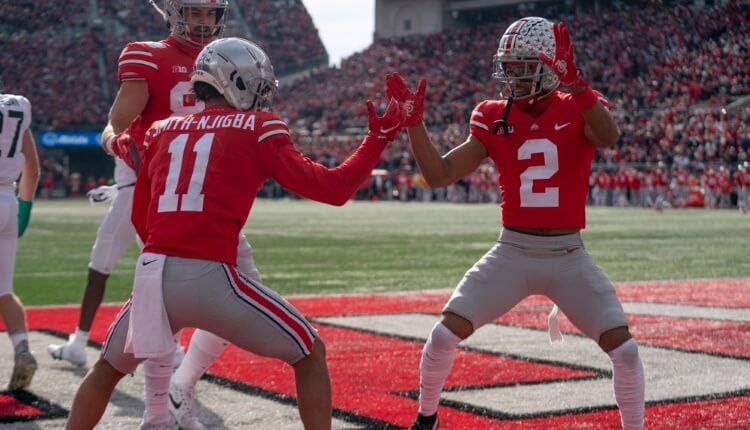 I love the month of March in the Northeast. Winter is nearly over. Springtime is just around the corner. First pitch of the MLB season is near. Across the nation on college campuses, spring practices open. It is time to take a look at the 2022 player rankings in College Fantasy Football.

In my lifetime, the transfer portal is the biggest change in the game on and off the field for coaches, schools, and college fantasy footballers. Ever since I read The Hundred Yard Lie: The Corruption of College Football and What We Can Do to Stop It by Rick Telander in 1990, I have been a proponent of players freely leaving schools and playing for another team. Why not?

I am so happy that athletes are unburdened by a poor decision they made as an 18-year old. Coaches and Athletic Directors could leave at any moment and forsake promises made to players when signing a letter of intent and receiving a scholarship. Players had nearly no recourse to improve their lives.

How exciting was it to watch Jameson Williams and Wan’Dale Robinson dominate SEC opponents, and assist CFF diehards winning titles, last year? Without the transfer portal, both players may still be on their former campus hoping for one more season to improve their career earnings as a professional. Of course, college fantasy football is so much more exciting with free agency.

I assembled an All-American team to take a peek inside the Top 12 Quarterbacks, Running Backs, and Wide Receivers, as well as Top 5 Tight Ends, Transfers, and Freshmen as spring practices commence. Kick off the crusade with a look at the College Fantasy Football rankings with me and four of the foremost player rankers in the hobby.

The First Down Panel:

After tallying the votes of all five members of the panel, I constructed a composite ranking at all the positions. The prognosticators also chose a player as the Top Heisman Candidate, Sensational Sleeper, and Best New Head Coach hire for the upcoming campaign… Enjoy my fellow diehards.

It is imperative to identify the elite dual-threat quarterbacks and acquire them on fantasy teams. In 2022, the First Down Panel clearly agrees with the aforementioned team-building strategy. Hendon Hooker, Caleb Williams, Malik Cunningham, Quinn Ewers, Brennan Armstrong, Jaxson Dart and Grayson McCall all are signal callers who should eclipse 500 yards rushing and score nearly ten times on the ground to bolster their fantasy scoring. Ironically, at the top of the rankings, CJ Stroud and Bryce Young—the 2021 Heisman Trophy winner—make their living with their arms with limited rushing totals and still adorn the position rankings.

College fantasy footballers looking to form a team around two backfield stars have many options available. Three ball carriers stand above the competition in 2022—Bijan Robinson, TreVeyon Henderson, and Deuce Vaughn. All are likely to be selected among the top 10 selections in CFF drafts. Jahmyr Gibbs, who transferred to Alabama, ranks fourth and freshman sensation Braelon Allen earned the fifth spot among the panel. Only two Group of 5 runners—Rasheen Ali and Lew Nichols—warrant a pick in the first two rounds of fantasy drafts according to the panel. Acquiring two of the top 12 running backs may be a winning strategy this season in CFF leagues.

Looking at the consensus rankings, two Buckeyes swept the top votes among the panelists: QB Stroud and his teammate WR Jaxon Smith-Njigba. There is a strong argument that both players could be the first two draft picks in CFF leagues. Also, Ohio State sophomore Marvin Harrison, Jr. leaped into the top ten CFF receivers…the Buckeyes are loaded on offense for sure. While the panel disagreed on the ranking of the next four wide outs, a consensus formed that AT Perry, Xavier Worthy, Jordan Addison and Kayshon Boutte are next in line off the board. Houston’s Nathaniel Dell is the only Group of 5 receiver to land among the top dozen. The panel projects Jermaine Burton, Myles Price and Milton Wright to catapult among the best in the business in 2022.