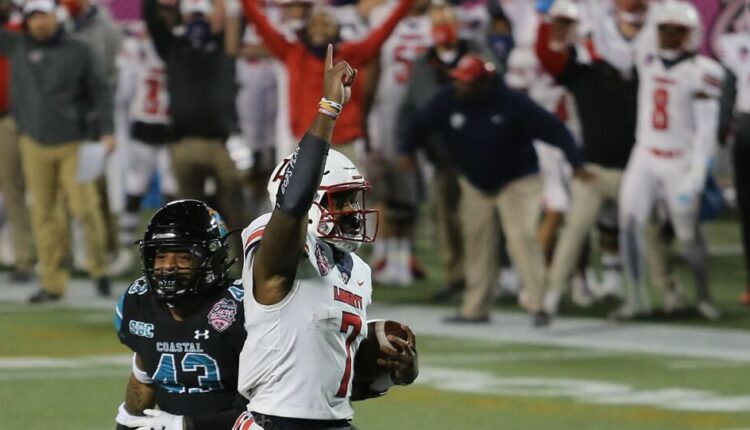 Kick off the 2021 crusade with an early look at the College Fantasy Football rankings with five of the foremost experts in the industry. I assembled an All-American team to take a peek inside the Top 12 quarterbacks, running backs, and wide receivers, as well as Top 5 tight ends, transfers, and freshmen before spring practices commence across the nation.

I love the spring. It is a tremendous time on the calendar to be a sports fan like myself. I am prepping for my fantasy baseball season and combing through all of the spring box scores and statistics to gain an edge on the competition. The NCAA Tournament tips off this week, and my UConn Huskies are back in the dance this year after a five-year hiatus. My brackets are completed. I hope the Huskies bust my Men’s Tournament Challenge and make the Final Four.

Unfortunately, the UConn football team does not warrant any discussion among the top college programs. But I remain a loyal follower and look forward to going back to Rensselaer Field in 2021. Some of my best Husky memories are attending the Blue-White scrimmage game at the end of spring practices in East Hartford. In 2019, UConn canceled its annual spring game, and I miss taking the kids to the event.

In order to replace my former voyage to the Rent each spring, I compiled my CFF player rankings and assembled a team of All-Americans to assist. There is already consensus around the elite players at each position, and the rankings illustrate possible value in upcoming drafts.

College Fantasy Football provides alternative-reality zealots, NFL Draftniks, and Dynasty and Devy owners a competitive advantage against their opponents. What are you waiting for? Get off the sideline and into the game on Fantrax.

The First Down Panel:

Four preeminent College Fantasy Football minds joined me in providing pre-spring CFF rankings for the upcoming campaign. I constructed a composite rating at all the positions. Players in BOLD are ranked higher by the expert than the consensus and a potential value in CFF drafts. The prognosticators also chose a player as the Top Heisman Candidate, Sensational Sleeper, and Best New Coach hiring for the upcoming campaign.

Breece Hall, Iowa State earned a first-place vote among four of the five professionals, finishing at the top of the rankings. The five experts adore Texas sophomore Bijan Robinson, who settled in only five points behind the Iowa State playmaker. Rounding out the top five ball carriers consisted of Mohamed Ibrahim, Minnesota, Sincere McCormick, UTSA, and Kyren Williams, Notre Dame. Jahmyr Gibbs, Georgia Tech, Austin Jones, Stamford, and Rachaad White, Arizona State are all valued differently among the CFF enthusiasts. It will be interesting to see each runners’ final CFF ADP in August.

Every year, wide receiver rankings diverge the most among the positions in college fantasy football. At the top of the standings, David Bell, Purdue, and Kayshon Boutte, LSU are the clear-cut favorites of the experts. Calvin Austin, III, Memphis, Reggie Roberson, Jr., SMU, and Treylon Burks, Arkansas follow the two game-breakers to complete the top five. Afterward, the experts vary their rankings. CFF diehards will find undervalued players to pluck in the middle rounds of drafts.