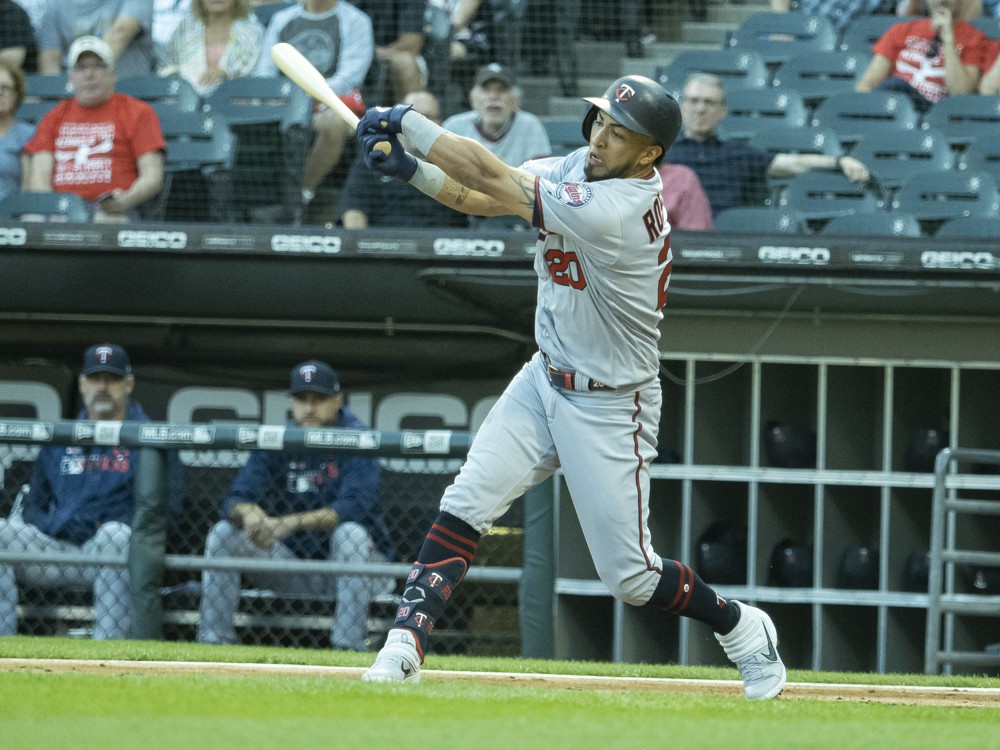 It’s that time of year where we are looking more towards 2020 value. I’ll take a micro look at the rest-of-season matchups, but we’re looking mostly to the future here. Rookie Nick Solak has been impressive through his first 100 plate appearances for the Rangers. In Minnesota, that lineup has been prolific. Eddie Rosario has been one of the worst hitters in baseball over the past month, however, so we’ll take a look at what is ailing him.

Nick Solak was acquired by the Rangers from the Rays in July. For fantasy purposes, it was great news. The Rays have such an abundance of middle infield bats that Solak was going to struggle to see playing time. The Rangers…have no such problem. They have been moving Solak around, playing him at second, third, and DH. That defensive versatility couples with the decline of Rougned Odor to create a nice window of opportunity for Solak.

Through his first 100 plate appearances, Solak has been impressive. He has hit .333/.440/.548 with four home runs, four doubles, a triple, and a stolen base. He has shown strong discipline at the plate as well, with a 12% BB% and 23% K%. That type of player would be an asset in all formats over the course of a full season, but how much of this production can we believe?

Throughout the minor leagues, Solak always displayed a strong eye at the plate. At almost every stop throughout his ascent to the majors, he walked at a double-digit clip while striking out under 20% of the time. A lot of Solak’s peripherals already back up the fact that he hasn’t been overmatched by major league pitching. He has exhibited patience with a 24.4% O-Swing% and 40.1% Swing%. He doesn’t have issues making contact either, with a 78.1 Contact% and just an 8.7 SwStr%.

However, many of Solak’s other peripherals tell us that there’s been some over-performance here. Solak has an inflated 25% HR/FB rate despite a below-average 29.5% hard contact rate. He’s more of a line-drive hitter, putting only 26.2% of his batted balls into the air. In addition to the .214 ISO looking unsustainable, Solak is rocking a cool .421 BABIP. We can’t simply take a hundred points off of his BABIP and call him a .233 hitter, of course. Solak’s all fields line drive approach, along with plus speed, lends to an above-average BABIP. Solak could easily be a .270-.280 type hitter over the long haul.

After snatching 21 bags at Double-A in 2018, Nick Solak has just six steals over 139 games in 2019. Considering the speed that he possesses, that is frustrating for his fantasy value. If he makes a more concerted effort to be aggressive on the bases in 2020, that would be a huge boon to his value. Stolen bases are a rare commodity in this day’s game, so the difference between Solak being an all-formats play and a deep league role player could hinge on a difference of 15 stolen bases. He’ll be an interesting late-round flier in deep 2020 leagues, but without guaranteed power or speed, shouldn’t be on your standard mixed league radar.

Perhaps it seems questionable to place a player with 29 homers and 97 RBI into the Ice category. Well, I’m nothing if not questionable, and Eddie Rosario has been horrible as of late. Over the past 30 days, Eddie has posted the second-lowest wOBA in baseball at .215. His issues have been largely masked by a potent Twins lineup, but he’s leaving his fantasy owners high and dry when they need him the most.

Over his past 23 games, Rosario is batting a disgusting .213/.224/.298 with two home runs and a 20:2 K:BB ratio. Woof. A large part of Rosario’s struggles have come due to his inability to lay off bad pitches. His 3.7% BB% this season is sixth-worst among qualified batters across the entire league. He made strides in his O-Swing% in 2017, fueling his breakout. Over the second half of the season, however, he has regressed in a big way. 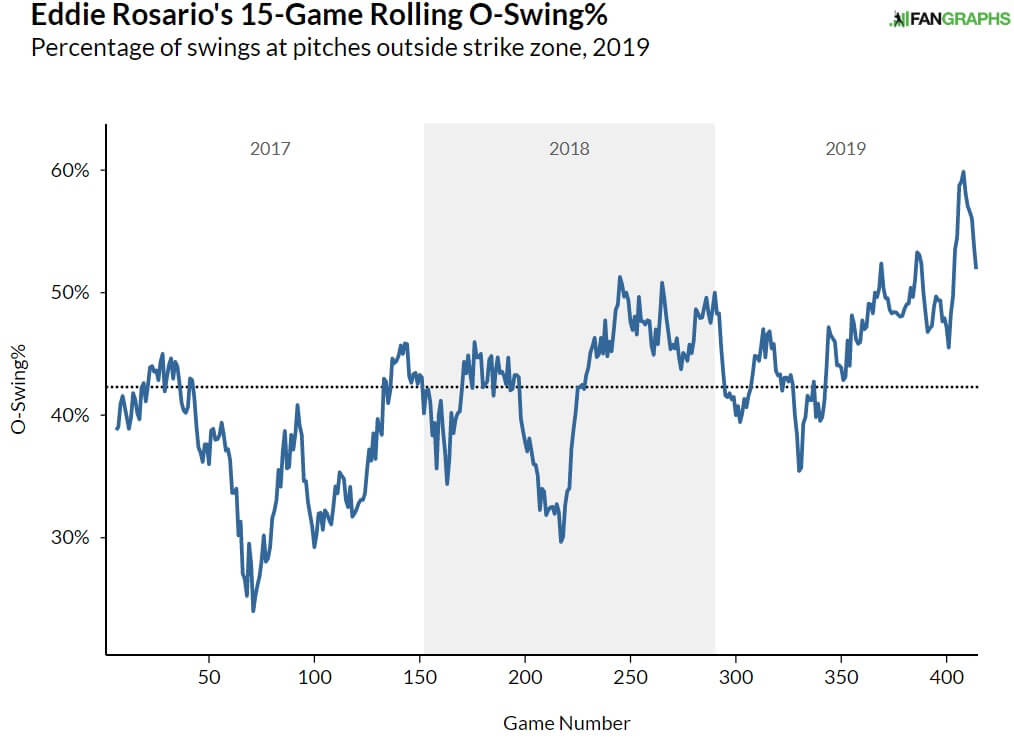 Rosario is flailing away at everything here late in the season, and it is costing him. Unsurprisingly, pitchers have caught on to his sudden propensity to swing at everything and are throwing him more junk. 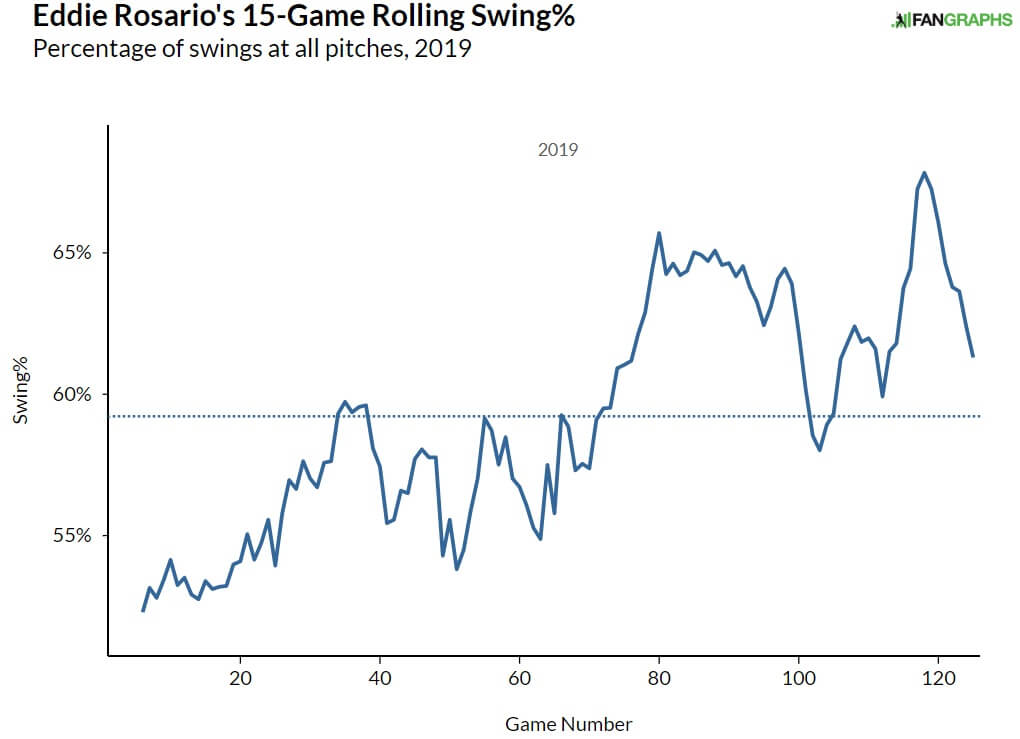 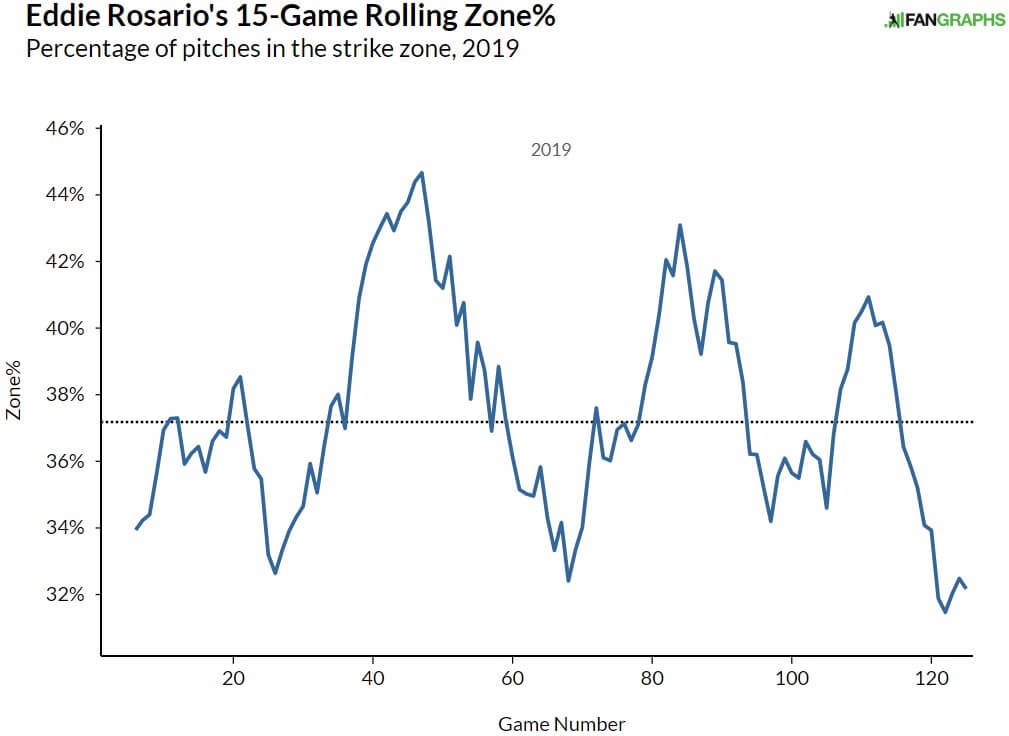 With power as ubiquitous as ever, the 30-homer mark isn’t as big of a deal as it used to be. Eddie Rosario’s spot in the middle of the Twins lineup has built up a strong R+RBI floor, but his .270 average is his lowest mark since 2015. His inability to get on base has left him with a painfully mediocre .322 wOBA and 99 wRC+.

He has favorable matchups the rest of the way with division rivals Chicago, Kansas City, and Detroit. As bad as he’s been though, you can get away from him in shallow head-to-head formats. Looking ahead to 2020, his value is buoyed by a strong Twins lineup. However, his lack of walks dings him in OBP leagues, and there isn’t anything to set him apart from other power hitters. With a full healthy year, he should still be a top 40 outfielder. However, his lack of speed and plate discipline caps his ceiling.

Where are you drafting Eddie Rosario in 2020? For more great analysis from Nathan check out his full archive.