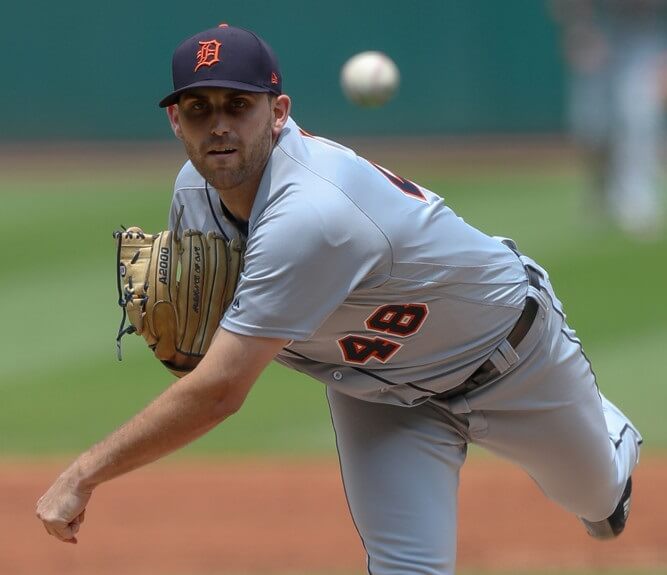 I promise I like hitters too. Eventually, there will be plenty of bats within the confines of this weekly space, but early on there is just so much more to take away from the pitching side of things. It takes time for Sabermetric stats to stabilize and become usable, but we can immediately take away major changes in things like pitch mix and velocity. That makes it more worth our time to take a look at some starting pitcher performances that should have our attention. Speaking of which, as long as I have your attention, let’s look at a couple mid-tier starters, in Matt Boyd and Pablo Lopez, who have had polar opposite results early on.

The regular season is upon us! Don’t worry, you can start a league 364 days a year at Fantrax.

Depending on where you’re looking, he’s either Matt or Matthew. We’re pretty casual here in the realm of Fire & Ice, so we’ll stick with Matt. The 28-year old lefty has made two starts on the young season, with eye-popping strikeout totals in each:

He slowly ramped up the velocity over the course of the season though, finishing at 92.3 in September. Oddly enough his first-half results with the lower velocity were better than his second half, but there’s not much to take away from that. He also had pronounced home/road splits at 2.63/5.89, but again, it’s hard to take much away from such splits (unless you’re pitching for the Rockies). He’s been sitting at 91 MPH in 2019, which is just fine. 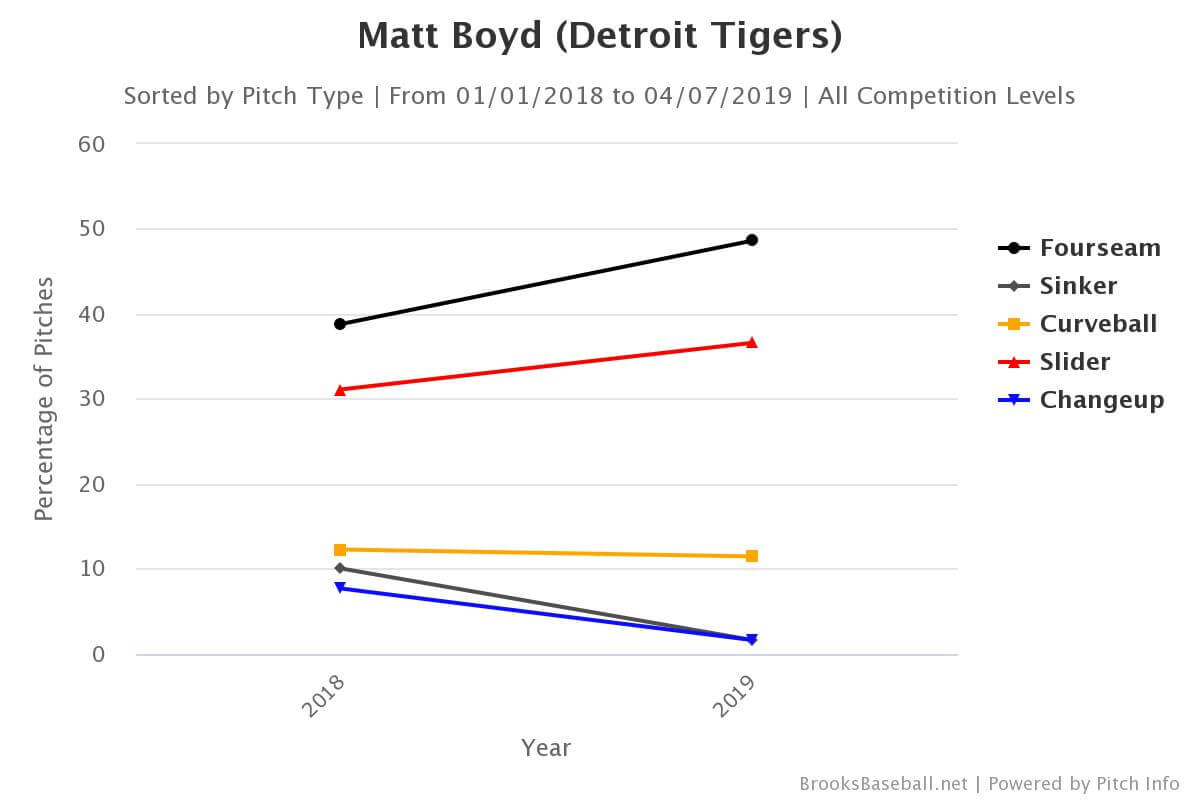 His slider was lethal for him last year, earning a 17.7 pVAL that ranked fifth in baseball (min. 170 IP) behind only Corbin (shocker), Chacin, Mikolas, and Foltynewicz. Might as well throw a few more of those! Boyd’s biggest issue last year was his splits against righties, allowing a .312 wOBA compared to a .280 wOBA against lefties. He has only increased the slider usage 5% this season against righties, but his whiff rate has skyrocketed from 15% to 36%. His confidence in the pitch has taken a step forward, and his command has been impeccable. Here is his pitch location on the slider against righties in ’18 compared to this year. 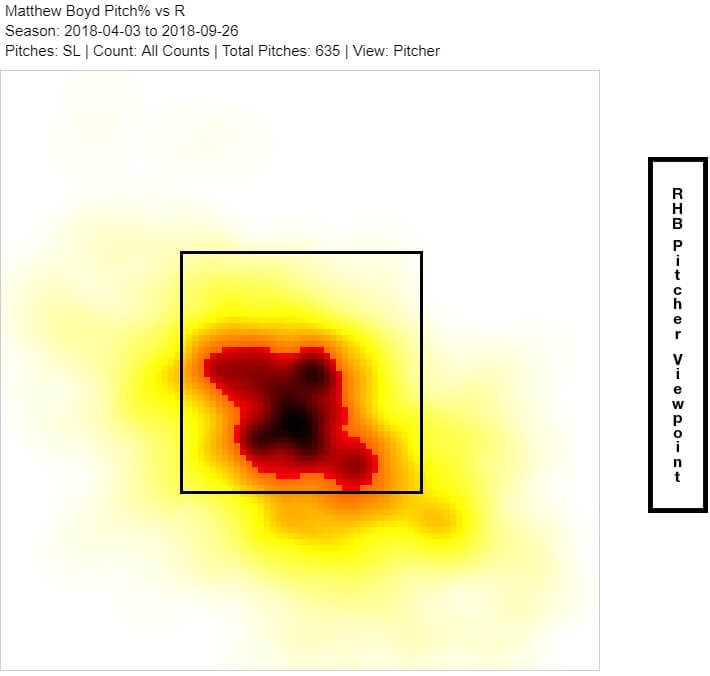 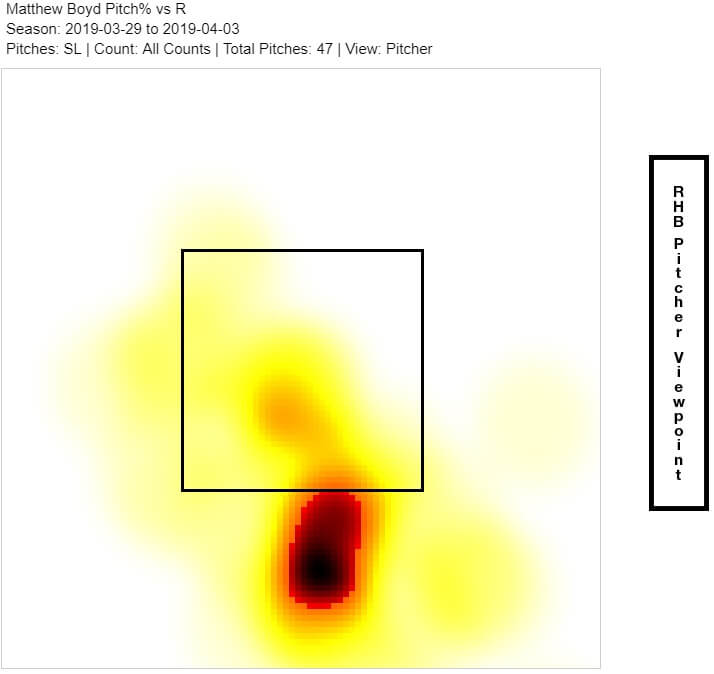 He’s been able to keep the pitch down, and he’s also been running the slider in on right-handers. Here he is making Luke Voit try to forget what just happened and think about his shopping list instead.

On top of the tremendous slider, his curveball has gained a bit more bite this year. He hasn’t used the pitch more as of yet, but its whiff rate has jumped from 7.4% in 2018 to 23.8%. The shift in pitch mix is promising, and there are a lot of bad lineups to take advantage of in the AL Central this year. Matt Boyd needs to be owned in all formats at this point, at the very least because of the strikeout upside.

Pablo Lopez ascended from Double-A Jacksonville all the way up to Miami in 2018. He started 10 games with the Fish, going 2-4 with a 4.14 ERA / 1.26 WHIP over 58.2 innings. Hardly head-turning numbers, especially considering the modest 7.06 K/9. His season was unfortunately cut short by a shoulder strain that cost him all of September. He came back healthy this spring and even got some late sleeper buzz thanks to an increase in velocity, reportedly hitting 97 MPH. However, in-season he is sitting just one tick above his 2018 velo at 94.5 MPH, and his results have not been great.

Through two starts he has a 6.10 ERA over 10.1 innings. While that certainly isn’t what his owners were hoping for from their late-round dart throw, there is still some upside here. Notably, he has a 12:1 K:BB ratio over those 10.1 innings, and a 3.72 FIP. His xFIP is even lower at 3.07 since he has a small-sample 18.2% HR/FB rate. Given the large delta between his results and his expected results, what should we expect from Lopez?

He features a four and two-seam fastball along with a curveball and changeup, which he typically commands well. It’s when the command isn’t there when he can get into trouble. The sinker is pretty not-great, yielding a .317 BAA last season and a .400 mark this season with just one whiff on 31 pitches. The four-seam has a small-sample 11.6% whiff rate so far in 2019 but sat at a far less impressive 7.69 mark from a season ago.

The curveball is a distant third pitch for him, but good enough for him to toss 22.6% of the time so far (20.3% in ’18). Pablo butters his bread with a nasty changeup. It’s weird to put a baseball on bread, but whatever cranks your shaft, Pablo. The change has earned 35.1% whiffs in his two starts, and here it is sending David Dahl back to the dugout frustrated.

The biggest issue Lopez has is his splits against right-handers, which as a right-handed pitcher himself is a bit unusual. He has a career .346 wOBA against righties (career still being just 33 IP) with a 36.5% hard contact rate. He understandably has been using the curve 31.7% of the time against righties and the changeup 18.8%, but perhaps he’d be better off swapping that usage around.

The curve can be useful, which is enough to believe that his three (or four, if you count the sinker) pitch mix can keep a lineup guessing twice. He’ll probably need the curve to take a step forward to consistently pitch deeper into games, but what we have now is enough to put him in streaming territory, particularly against lefty-heavy lineups. At this point, it’s hard seeing much more than that.