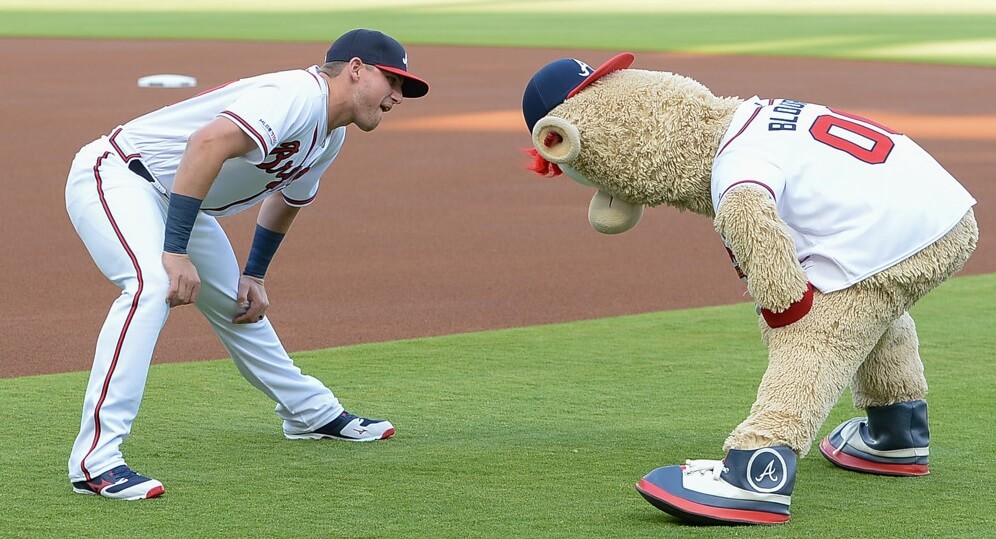 It doesn’t get much more fun than talking about impact rookies. They are often polarizing and make for some great back-and-forth discussions. We have two rookies on tap this week, one in Austin Riley, who took flight earlier and was soaring but has since crashed. The other was far less heralded but is turning a lot of heads.

Easily one of the most surprising rookie performances of 2019 thus far has come from Luis Arraez. He never got much notoriety as a prospect because of, well, because of many reasons. He does not offer premium defense. He has shown almost no power with six total home runs in 1,428 minor league at-bats. He doesn’t have a ton of speed, with just 29 steals in 51 career minor league attempts. One thing Arraez has always done – regardless of what level he has played at – is hit.

The 22-year-old Luis Arraez has a .331 average and .385 OBP throughout his 367 minor league games. Should we be completely surprised, then, that he has hit .381/.450/.496 over his first 129 plate appearances? Well, probably. Baseball at the highest level is pretty hard. He’s rocking a cool .394 BABIP over those 35 games. You don’t really need me to tell you that neither the average nor BABIP are going to hold up. However, since the regression police are coming to the scene, we have to ask: where does his true talent level lay?

The first thing you notice if you watch Arraez in the box is that he makes contact. A LOT of contact. His 90.9% contact rate would land him second in MLB if he had enough at-bats to qualify, second only to Anaheim’s David Fletcher. He is simply an elite contact hitter. His 3.3% swinging strike rate would also put him second in baseball, behind only Fletcher once again. This tells us why Arraez has a minuscule 6.2 K%. That would be the lowest strikeout rate in baseball if he qualified for the leaderboard. While it’s not likely to remain quite that low, Arraez could certainly sustain low-teens or upper-single digits K% all season.

Arraez is also walking at a 10.9% clip, nearly twice as much as he is striking out (14:8 BB:K). He has a tremendous eye at the plate, showing an innate ability to lay off pitches out of the strike zone. His O-Swing% is 23.8%, which would place him in the top 20 on today’s leaderboards. Even if the walk rate tumbles a bit, he is a very patient hitter with a great eye. An above-average walk rate over the long-term is probable.

This all points to a strong on-base option for fantasy. His obscene BABIP and average are partially deserved, frankly, fueled by a mega-elite 36% line drive rate and an all-fields approach. He isn’t a total slap-hitter either, with a 39.4% Hard%. Statcast lists his XBA at .315, a mark which seems easily attainable the rest of the way.

The question is: just how valuable is a player who gets on base at a high clip but provides nothing else? If we compared him to David Fletcher, who has a similar fantasy skillset, we get a bit of an idea. Fletcher has put up 5 HR, 6 SB, 52 R, 33 RBI, and a .355 OBP over 93 games. According to Rotowire’s earned auction values, that is worth $3. Fletcher is putting up decent run scored totals thanks to the Angels batting him leadoff in 39 of those 93 games. Arraez has only led off four times, hitting primarily in the bottom half of the lineup. That drops a big wet blanket on his R+RBI upside.

On the bright side, the Twins are deploying Arraez in a utility role. He has already played second base, shortstop, third base, and the outfield. He could certainly qualify at multiple positions by seasons end, making him more valuable in deep leagues. The only way Arraez will be a real difference-maker in standard mixed leagues, however, is if he moves to the top of the lineup. He could have a sort of DJ LeMahieu appeal in that scenario, scoring a ton of runs with a high average while lacking HR/SB. That is unlikely to happen this year as Rocco Baldelli seems keen to stick with Max Kepler or Mitch Garver atop the order. As soon as next year, however, Luis Arraez could be the every day second baseman for the Twins, leading off every game. Dynasty leaguers, take note.

Things started off so well for Austin Riley. He annihilated Triple-A pitching with a 1.057 OPS and 15 home runs over 37 games. That earned him a promotion to Atlanta, and deservedly so. However, with Josh Donaldson entrenched at third base, Riley shifted from his natural position to left field. The defensive move didn’t bother him offensively, as he posted a 1.143 OPS with seven home runs over 15 games in May. Through 15 games in July, however, he is batting just .170 with two home runs.

There is no doubt that this year’s juicy new baseballs aided Riley upon his arrival. That, combined with his aggressive approach at the place, made opposing pitchers pay. Now that the league has got a good look at him, we are seeing an adjustment period. 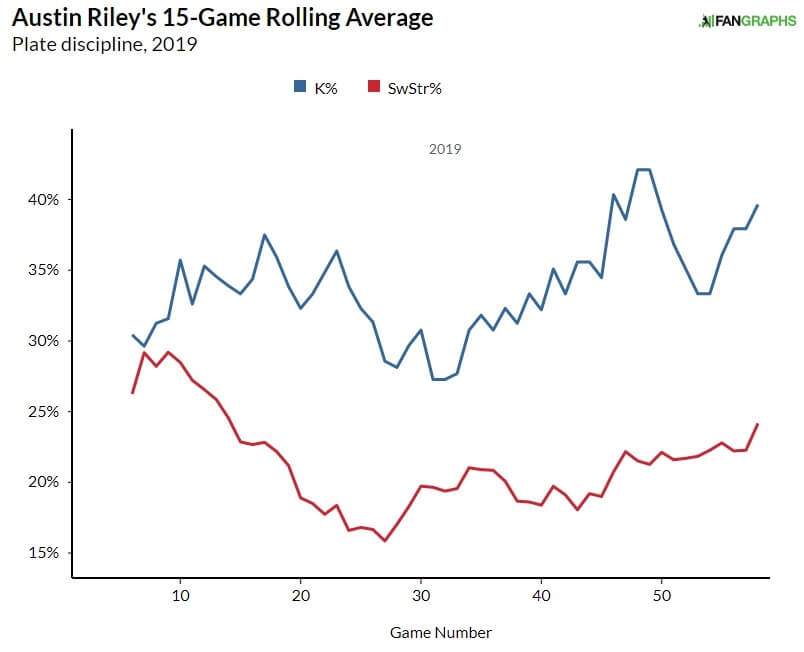 Strikeouts are simply a part of Riley’s game. It’s commonplace these days to see power hitters strike out upwards of 30%. It simply isn’t the issue that it once was. Austin Riley sits on the extreme end of that normalcy, though. His strikeout rate over the course of his 236 plate appearances is 34.3%. That is already within the Danger Zone. Seriously Austin, call Kenny Loggins. His July K% is 39.7%, the third-highest mark in the league (Gallo, Odor). His 55.7% contact rate is the worst mark in MLB, however, as is his 24.2% swinging-strike rate. So that’s…terrifying.

Austin Riley is crushing lefties (1.274 OPS) but struggling hard against righties (.703 OPS). As a right-handed bat himself, that’s unsurprising but no less unfortunate. It isn’t all bad, though. His 8.5 barrels per plate appearance ranks 38th in MLB. That is encouraging for his future power output. It will also help him maintain a batting average above the Mendoza Line with such a huge strikeout rate. That said, Riley’s aggressive approach is a hindrance to his OBP. With power as ubiquitous as ever, Riley’s usefulness is diluted by his inability to make contact. You probably need him in 15-team mixed leagues, but he isn’t a must-own in standard mixers the rest of the way.

Are you onboard with Nathan’s take on Luis Arraez and Austin Riley? For more great analysis from Nathan check out his full archive.