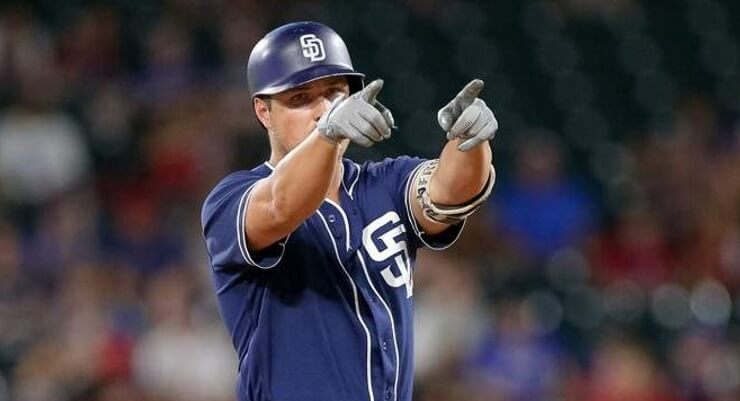 We’re catapulting into the second half of the MLB season already, like it or not. The two players on tap this week were two of the largest over- and under-performers of the first half in Hunter Renfroe and Rougned Odor. Over the last month specifically, though, Renfroe has an absurd .370 ISO while Odor has an equally absurd 39.3% K%. I’ll let you decide which category those two are piled into. Let’s see what we should expect from these two over the second half.

Few batters have surprised us more over the first half of the season than Padres outfielder Hunter Renfroe. After smashing 26 home runs in both 2017 and 2018, Renfroe has already hit 27 bombs over his first 83 games. He’s always been known as a masher, but should we be considering him as one of the elite power bats in the game?

There are plenty of factors that play into a batter’s power output. Three of the biggest factors are Hard%, FB%, and Pull%. 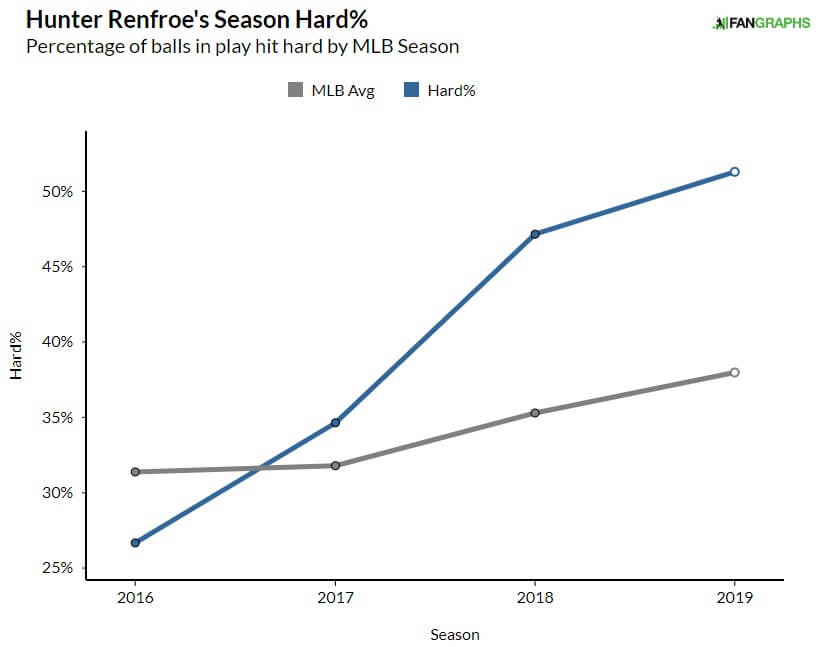 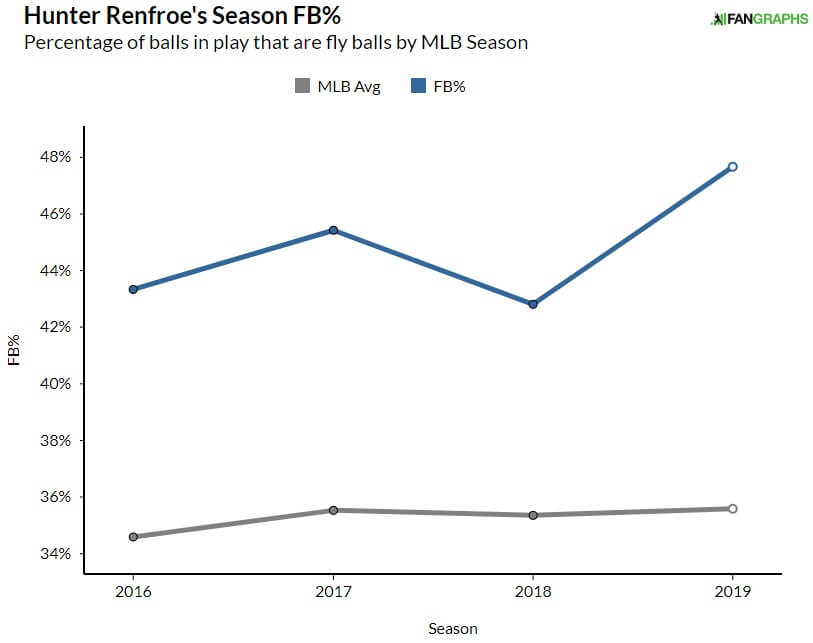 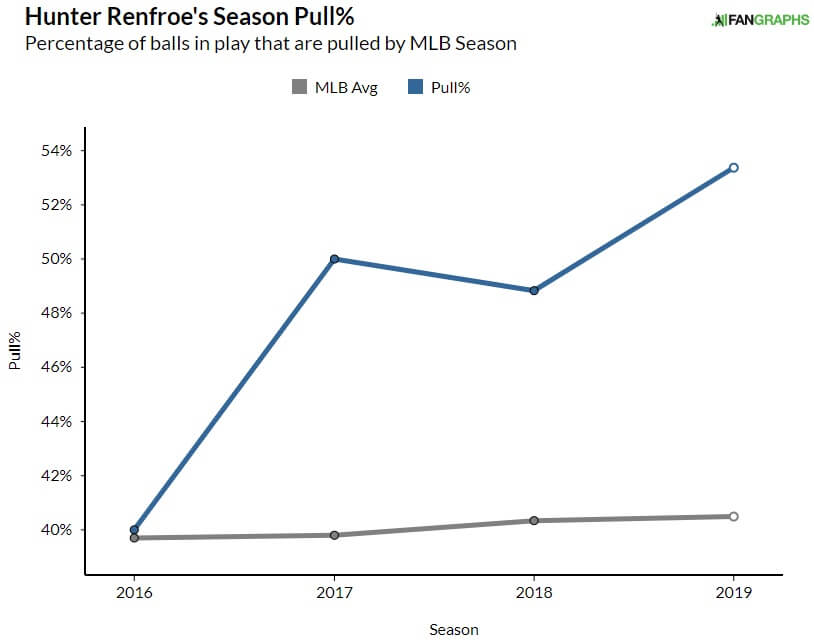 Hunter Renfroe has always been well above league average in terms of fly ball rate. He is a slugger, after all, not a contact hitter. What has helped Renfroe’s power really blossom this year (outside of the “allegedly” juicy new balls) is career-highs in his Hard%, FB%, and Pull%. They all feed into each other to help the balls clear the fence. It’s unsurprising, then, to see a 29.3% HR/FB rate on the year. Renfroe’s 51.3% hard contact rate this year places him among the elites in baseball. 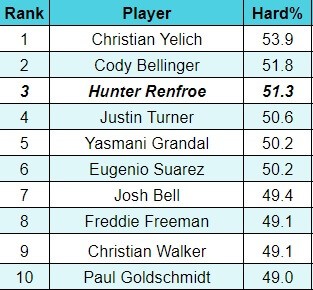 There are some mighty fine names atop that list, which you would expect. Where Renfroe falls off when compared to the elite bats, however, is in terms of batting average and walk rate. We do have to give props to Renfroe, though. His 73.5% contact rate marks the third straight year he has improved in that regard. He has also trimmed his SwStr% down from 15% in 2017 to 12.9% this year. Even his 8.1% BB% is finally up around league average. Strikeouts will always be a part of his game and detrimental to his batting average, but these improvements will help him at least hover above a .300 OBP.

Before we knew just how much feeds into BABIP, we would have looked at Renfroe’s .241 BABIP and screamed positive regression. Renfroe is now over 1,250 plate appearances into his career with a .268 BABIP. He should enjoy some positive regression over the second half, but we can’t expect him to hit .300 with his fly ball heavy profile. He has trimmed 4.7% off his pop-up rate though, which will aid him in his quest to hit above .250.

We’ve seen a step forward from Hunter Renfroe this year. His 9.1% barrel per plate appearance rate ranks him 30th in baseball, further solidifying his place among the premier power bats in baseball. He has made incremental gains across the board and is in the prime of his career at 27 years old. He has been effective enough against righties (.854 OPS) to avoid a platoon. He’s also batting fourth or fifth every day and could push for 100 RBI. Even if the home run rate slows a bit over the second half, there could be some upward trajectory in terms of his batting average. It’s time to stop underrating him.

On the other hand, a player who tends to get overrated is Rougned Odor. Two straight years of 30+ home runs and 14+ stolen bases will tend to do that. Last year he dropped off a bit, finishing with 18 bombs and 12 steals. He did impress us, however, with 12 of those homers and seven of those steals along with a .266 average over the second half. He was still a commodity in drafts as a result, but his first half hasn’t been what we desired. His HR/SB total is just fine, with 13 homers and seven steals. His slash line is a detriment though, at .194/.259/.396. We’ve seen a full year from Odor with a .204 average, so is this a repeat of 2017 or is something else going on?

One of the few promising signs we got from Odor last year was a slight improvement in strikeout rate. Combined with a respectable jump in walk rate from 4.9% to 8%, naturally, we expected further improvement in plate discipline in 2019. That…has not happened. 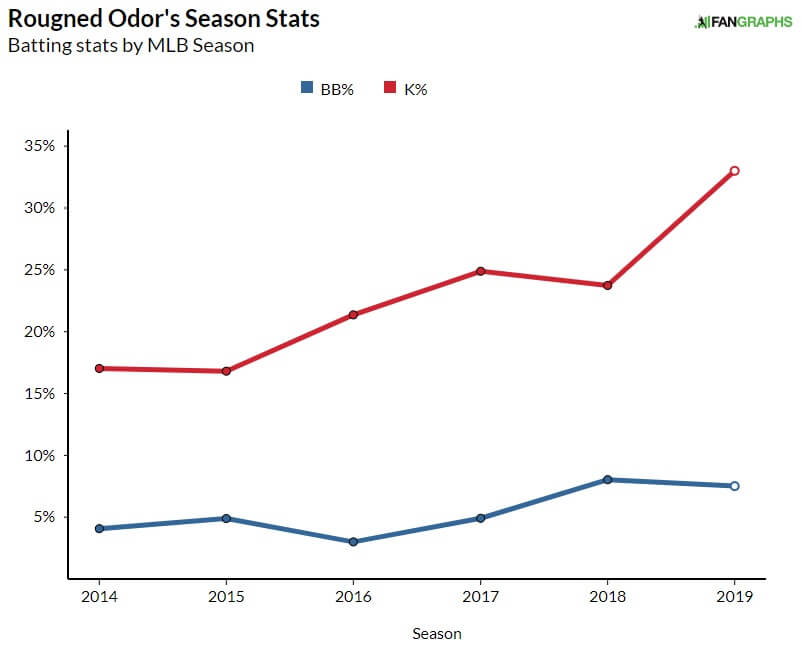 Odor’s strikeout rate has skyrocketed to 33% on the season. Not only is he swinging and missing more (13.3%), his contact rate has dropped 5.8% to 72.4% – the lowest mark of his six-year career. He is making far less contact within the zone, missing pitches that he should be demolishing. This could be something mechanical that he can adjust over the second half, but we can’t be confident in that adjustment coming.

It’s deja vu all over again if you had Rougned Odor back in 2017. He went 30/15 and was worth -1.2 fWAR. He could reasonably finish 26/14 if you simply double up his first-half stats. Neither his home run nor stolen base paces are unsustainable. Unless, of course, someone in the Rangers organization finally wises up and realizes that Odor has a career 56% stolen base success rate and gives him the red light. He is 7-13 this year in stolen base attempts, unsurprisingly.

Is it really worth putting up with the .194 average for the power/speed blend? He has currently “earned” -$3 through his first 77 games (courtesy of Rotowire), so the numbers indicate owning him isn’t worth it if the low BA continues. His Statcast expected batting average is .213, so a huge improvement certainly isn’t expected. You might be stuck with him in deeper leagues. In standard mixed leagues, though, you can do better than Rougned Odor over the second half.

Are you onboard with Nathan’s take on Hunter Renfroe and Rougned Odor? For more great analysis from Nathan check out his full archive.