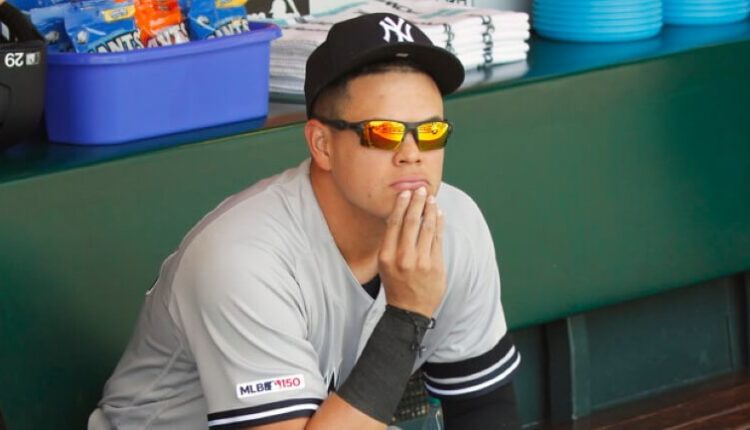 Each week Nathan Dokken takes a look into the numbers surrounding two players with vastly different 2019 seasons. This week features Gio Urshela as the fire and Corey Seager as the ice.

Now that we are into the final third of the season, my analysis shifts a bit. There are a lot of you already out of contention in your leagues. Don’t think I can’t see you eyeballing fantasy football ADP already. At least you’re at the right site for fantasy footing ball analysis! So, whether you’re still competitive in your leagues or not, we’re going to be looking a bit more towards 2020 value. Rest-of-season outlook is still our primary concern, but it’s never too early to think for the future.

A very interesting consideration for 2020 will be the Yankees hot corner. Miguel Andujar burst onto the scene last year with a Rookie of the Year caliber performance. As we know, he, unfortunately, will miss most of this season with a torn labrum. It is beginning to look like the Yankees have another talent who can push Andujar for the starting third base gig. That player is Gio Urshela.

Gio (or Giovanny, if you’re looking him up on Fangraphs. Or if you hate Geo Metro’s because one ran over your foot fifteen years ago and hearing Gio triggers your PTSD) Urshela began the season doing his best Miguel Andujar impression. Not, like, actually pretending to be Miguel Andujar, of course. Over the first half of the season, Urshela hit .304, besting Andujar’s .294 average from 2018. Where the impression fell short, however, is in the power department. Whereas Andujar put up a solid .230 ISO, Urshela could only muster up a .165 mark. The batting average is convenient, but in standard leagues, it’s hard to roster players with an ISO that low in this new era of juicy balls.

Of course, Urshela finds himself in the Fire category this week, doesn’t he? That means things are looking up. Urshela has been one of the best bats in baseball since the All-Star break, with a .365/.400/.835 line and 10 bombs over 23 games. His second-half ISO is a cool .471! Is this power surge a blip on the radar? Some small sample magic? Or are there legitimate changes to take into account? We know you can’t hit the ball over the fence if you’re beating everything into the ground, so let’s check out his fly-ball rate. 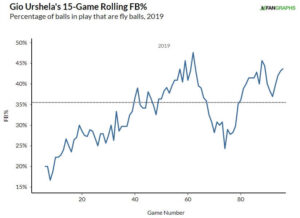 That’s a good start. Urshela has pushed his fly ball rate up over 40% in July and August. He has also pushed his hard contact rate up over 51% over the second half, compared to his 43.3% first-half mark. If you’ve been reading at all this year, you know that there is one more thing we need to look at, which is his Pull%. 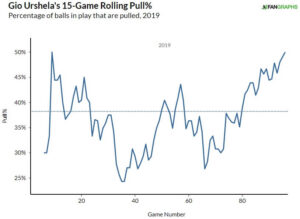 It’s not a linear change by any means, but it’s still promising. His second-half pull rate is up over 12% from his first-half 34.8% mark, up to 47.2%. Each of these factors has helped him towards a ridiculous 32.3% HR/FB% over the second half. As a player without anywhere-power, more pulled fly balls is a good thing. Almost all of his home runs have been to the pull side. 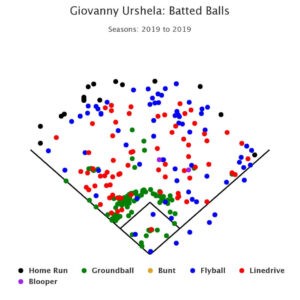 Even with more of a pull-heavy fly ball profile, we clearly can’t expect a 32.3% HR/FB% to sustain. Even if we cut that number in half to a (barely) above-average 16.2%, this profile lends itself to a .200+ ISO. When you combine average-or-better power with the improved batting average (.312 XBA) you get a player that is useful in all formats. A mechanical adjustment has led to more hard contact overall this year, giving us further confidence that this success can be sustained. Maybe he isn’t Miguel Andujar just yet with the stick, but his defense is markedly better. Gio Urshela has turned into a player we should be interested in both long- and short-term.

A 2018 draft darling, Corey Seager has fallen on hard times. Tommy John surgery cost him most of 2018, and he has continued to deal with injuries throughout 2019. A hamstring strain put him on the IL for nearly a month. Since he returned on July 10, he has hit a paltry .221/.292/.326 with one lone home run and zero steals. Are we looking at a player we should be dropping?

It’s hard for any of us to consider dropping someone with the ADP and name value of a Corey Seager. We ran into this very issue last year with Carlos Correa, though. Correa came off the DL (back in the good ol’ days when it was the DL) in the second half only to struggle through continued back issues and post a .517 OPS. You were better cutting your losses and playing the waiver wire. Things aren’t quite so dire with Seager, however. Whereas Correa’s numbers were trash across the board, Seager’s are merely… underwhelming.

Seagers .105 ISO ranks 25th worst in baseball over the second half. His 36% hard contact rate is far from impressive but isn’t anywhere near the league laggards. His fly-ball rate has dipped from 42.6% in the first half to 33.3% in the second half though, making it hard to put balls over the fence without a ton of hard contact. It is business as usual regarding his plate discipline numbers though, further indicating this not to be a complete disaster.

As I write this, Corey Seager has doubled twice. He had doubled seven times over 27 second-half games coming into this game, so this is potentially a sign of good things to come. His hamstring injury seems to have thrown off his power stroke, at least insofar as Corey Seager has a power stroke when you consider his career .187 ISO. For most people, it is already too late to try to buy low via trade and hope he turns it around this season. However, he is shaping up to be a very nice buy-low this offseason in dynasty formats. A healthy Seager could easily return to being a 25/.300 bat in 2020.

Are you onboard with Nathan’s take on Gio Urshela and Corey Seager? For more great analysis from Nathan check out his full archive.