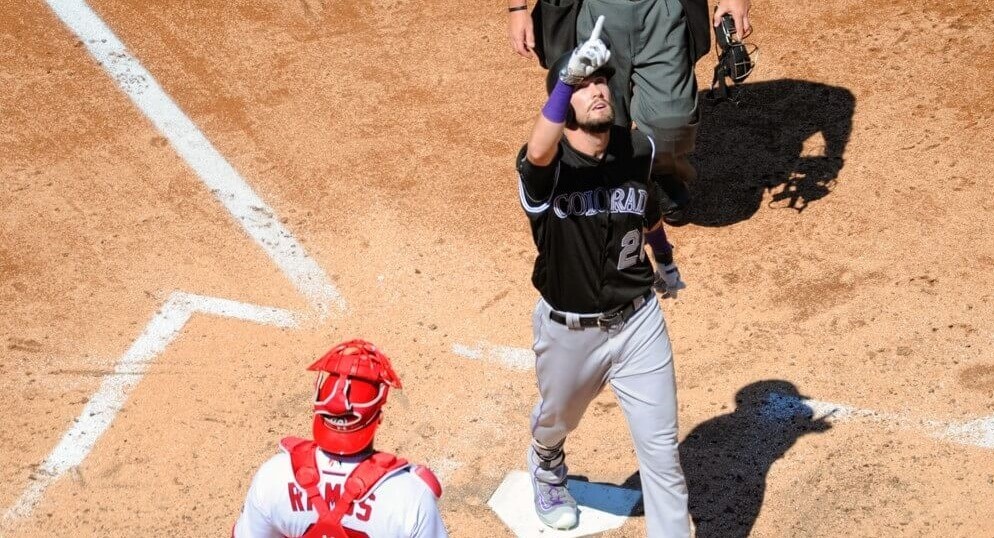 It’s not that I didn’t care for David Dahl coming into the season. Any Rockies hitter with the plate skills of a guy like Dahl has my utmost attention. What I didn’t care for was Dahl’s ADP. Here at Fantrax, he was the 84th overall player off of the board. That was a steep price to pay, in my estimation, for a guy who is injured every season and had never performed at a top 20 OF level for a full season. Not to jinx it, but so far he has been healthy. And boy has he been producing.

On the season, Dahl is slashing .338/.389/.548 with seven bombs and two steals. He’s typically batting right in the middle of that Rockies lineup and has already racked up 43 runs and 35 RBI. A lot of the damage is thanks to a league-leading (by a mile) .432 BABIP. Second place goes to Brandon Lowe at .394. Obviously spending half your time at Coors Field does a BABIP good, but there has to be some regression, right? Just how much can we expect? To best answer that, we have to look at some incredible adjustments Dahl has made midseason.

I provided the season-long stat line, but what is really amazing is what he’s done over the past couple of weeks. Since May 22 (24 games) he has hit .406/.458/.656 with four homers, eight doubles, and a pair of triples. That is all totally egregious, but the most impressive change is in regards to his plate discipline. Check out these splits between his early season results and those of the past 24 games.

That is a – 23% – decrease in strikeout rate. That is either some extreme small sample size magic or one of the most dramatic improvements I have ever seen. TWENTY-THREE PERCENT. WHAT?! Sorry, I’ve lost my composure. Where is my brown paper bag? I know it’s around here somewhere, I’ve kept it around for the last decade of Twins baseball. Deep breaths, easy now, whoo-sahhh…

Very good. I’m back. Back to the task at hand. Is this some mere small sample wizardry, or something more? We look into his plate skills. 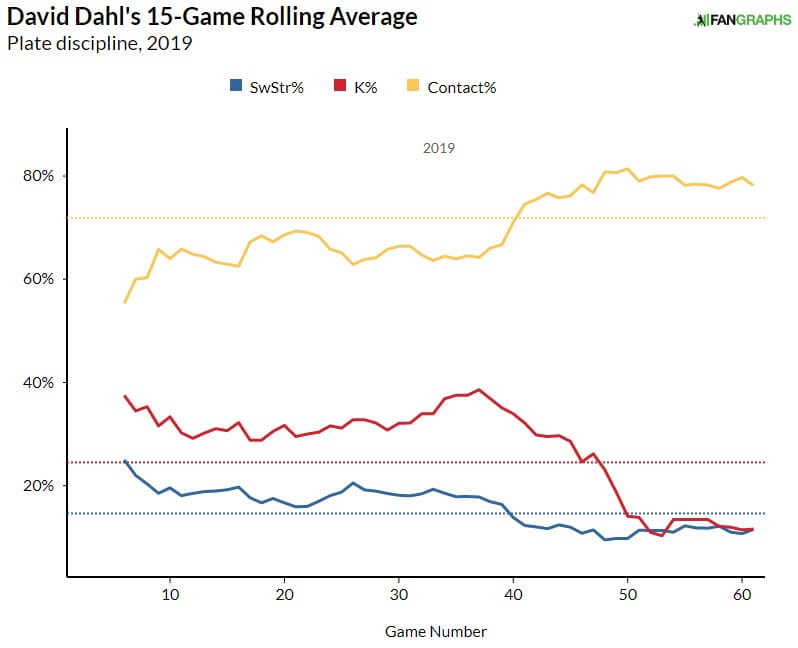 Dahl’s swinging strike rate and contact rate each line up exactly with this drop in strikeout rate. Sixteen games into the season, Dahl’s contact rate was a putrid 62.5%. As of June 15th, that has shot up to 78.2%. His swinging strike rate, which ran at 25% early on (and 15.4% in ’18) is now under 11%. This looks like a legitimate improvement that could skyrocket his value for the foreseeable future.

If there is a downside with this new contact-oriented approach, it’s that it could sap some power. His hard contact has dropped, primarily due to an 11.8% decrease in pull rate. He has increased his fly ball rate, but he doesn’t have the Joey Gallo type of “anywhere” power to muscle a ton of balls out to the opposite field. That said, modest power along with a potential NL Batting Champion type of average should suit anyone just fine. With an 11.8% Barrel%, perhaps he just makes enough great contact to avoid home run regression.

The only thing that could sabotage David Dahl at this point is another injury. Will the BABIP come down? Of course. How much? Well, JD Martinez enjoyed a .375 BABIP throughout 2018. Christian Yelich was right behind him at .373, and Mookie was there too, at .368. The best hitters can string out high BABIPs because of the contact they make – and none of those hitters got to call Coors Field home. I wouldn’t be at all surprised if Dahl finished the season as the league leader in BABIP with a mark higher than .375.

Alright, I’ll admit it. I’m fudging a little bit on this one. Lance Lynn hasn’t been bad over the past 30 days. He has a 3.45 ERA, which is more acceptable this year than ever. Believe it or not, those results are actually terrible compared to his FIP…which sits at 1.45. It is Lynn’s icy cold ERA when compared to the FIP that puts him in this week’s Ice section.

Since I’m admitting to a lot of things this week, I’ll also admit that I was befuddled and amused at the Rangers paying Lynn $30 million this offseason. I watched a lot of his miserable starts with the Twins in 2018, and he wasn’t much better after being dealt to the Yankees. He finished the season with a 4.77 ERA. On the surface, things don’t look terribly different here in 2019. A 4.40 ERA sure doesn’t help mixed leaguers. However, over those last 31.1 innings, Lynn also has a 44:6 K:BB ratio, or 12.6% K% / 1.7% BB%, if you prefer.

Lynn has endured a .382 BABIP over that span and a .349 BABIP over the full season, since we seem to be covering incredible BABIP numbers today. When you consider his 21.4% pop-up rate over the last month, 36.4% FB%, and 33.8% Hard%, it is almost inconceivable that he’s been stricken with that .382 BABIP. Perhaps that is simply a pitfall of pitching in Texas in the summer heat when that ball really flies.

There is no age-32 overhaul here, but he has made some changes this year. The spin rate on his four-seam fastball and cutter are each up, while the spin rate on his sinker is down (a good thing). He has also moved away from that sinker a bit, from nearly 33% usage in 2018 to just 19.8% in 2019. He’s using that cutter more than ever at nearly 18% (more on that momentarily), which is his biggest whiff-getter at 13.65%. What really fuels Lynn’s high strikeout rate is his four-seam, which nets 12.59% whiffs – one of the highest marks in the league.

Lance Lynn has also been pounding the zone with more frequency this season. Without great breaking stuff, he doesn’t get batters to expand the zone much. That means he has to be great within the zone, and he has been. His 44% zone rate is the highest of his career, and he has the eighth-lowest Z-Contact% in MLB over the last month (only Scherzer, Verlander, Odorizzi, Giolito, Ray, Thor, and Snell have been better).

His biggest issue in 2018 was his splits against left-handed bats. His .366 wOBA wasn’t “cutting” it. I put that word in quotes because it is a horrible foreshadowing pun. Lynn has brought his wOBA against LHH down to .329 this year thanks to a leap in cutter usage. He deployed the pitch just 6% of the time against LHH in ’18 and this year he has cranked that rate up to 16.54%. He is also being more aggressive with the pitch. 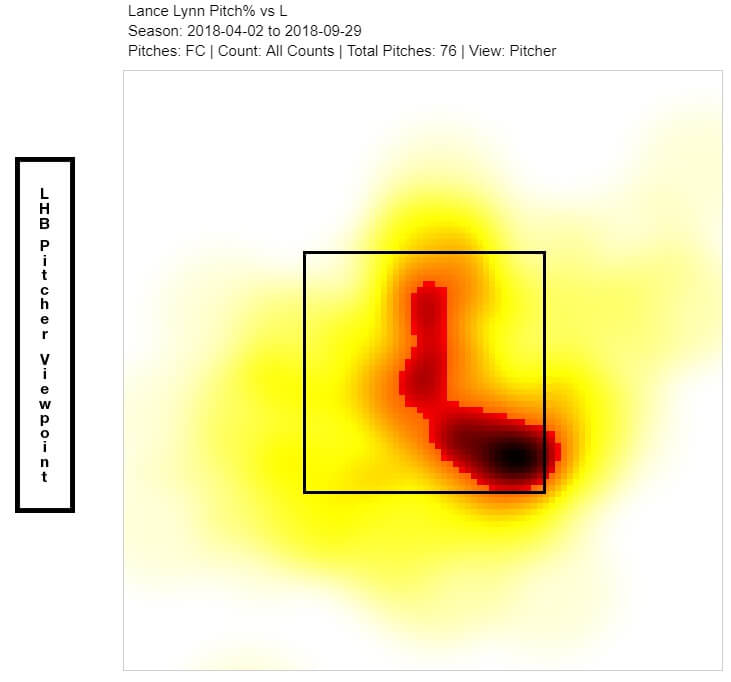 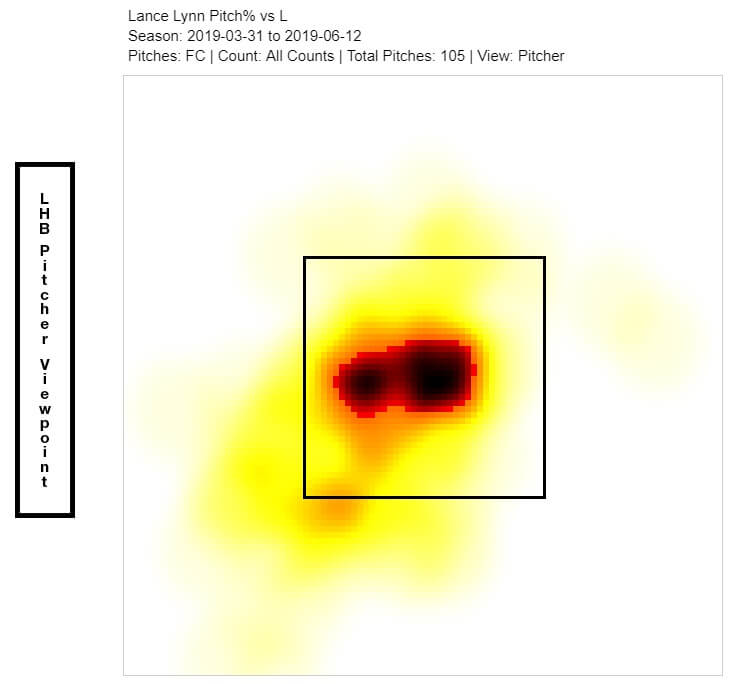 Whereas Lynn had previously been pitching lefties down and away with the cutter, almost fearful they’d make contact, this year he is challenging them with balls in the zone and in on their hands.

There is also an extra unexpected half tick of velocity that Lance Lynn has picked up this year. That doesn’t hurt. Will this new approach and pitch mix continue to equate to crazy strikeout rates north of 12 K/9? I’m dubious. Even if/when his K-BB% comes back to earth a bit, his results should improve moving forward as well. We can reasonably expect a mid-threes ERA with over a strikeout per nine the rest of the way. In this pitching climate, that’s a starter to be rostered even in standard mixed leagues.

Are you onboard with Nathan’s take on David Dahl and Lance Lynn? For more great analysis check out his full archive.