The All-Star break provides us with a chance to take a breather from the hectic day-to-day pace of the fantasy baseball season. It also gives us an opportunity to take a good look at our rosters and devote some time to finding the players who can help fortify our position in the standings — or at least salvage our season. If we look hard enough in our Roto leagues, we can find players who can help us in each category, possibly at a bargain price. Those of us who need hitting help often gravitate towards the power hitters, but we should not overlook our need for second-half batting average help.

Below are five hitters who have the potential to bat .280 or higher over the remainder of the season. Some may be available on waivers, even in some deeper formats, but we will begin with a couple whom you will have to trade for, regardless of what type of league you are in.

Note: Ownership percentages for Fantrax leagues are in parentheses for each player.

Jose Abreu, 1B, White Sox (99 percent owned): As far as batting average is concerned, Abreu had been a beacon of consistency coming into this season. His rookie season mark of .317 remains his career high, but in the three full seasons since then, Abreu has batted .290, .293 and .304.

If there is a good reason for why Abreu batted just .253 in the first half, I have yet to find it. His xAvg of .289 puts him right in line with his prior full-season marks, and given that his batted ball profile and strikeout rate are similar to those of the past, it makes sense that it would be.

It is also puzzling that Abreu has hit only 13 home runs to date, especially since he is hitting with the highest average exit velocity of his last four seasons. It is fair to expect Abreu to hit with more power in the second half, and just maybe there is something to the fact that he has had a power surge in each of his last two second halves. In 2016, Abreu had an 11.8 percent home run-to-flyball (HR/FB) ratio and .158 Iso in the first half, and he followed that up with an 18.4 percent HR/FB and .195 Iso in the second half. Last season, he posted a 16.2 percent HR/FB and .223 Iso before the break and a 20.0 percent HR/FB and .279 Iso after the break. It may just be coincidence, but at the very least there is no particular reason to think Abreu’s power numbers will wane in the second half.

Mike Moustakas, 3B, Royals (99 percent owned): As with Abreu, there are no apparent signs of decline for Moustakas, yet somehow, he is batting 23 points lower than he did a year ago. In fact, there are two good reasons to expect that Moustakas will surpass last year’s .272 batting average the rest of the way. He has a .293 xAvg in the first half, which has been bolstered by a drop in his Poorly Hit rate from 34.1 percent a year ago to 27.8 percent so far in 2018. Also, Moustakas is likely to be traded soon, and he will be leaving behind Kaufmann Stadium, which has been neutral in terms of batting average.

The #RedSox and #Braves are both interested in Mike Moustakas as a trade deadline acquisition, sources say. The #Yankees have already been mentioned as a potential landing spot. There’s enough of a market for Moose that it’s more likely than not the Royals deal him this month.

Imagine if Moustakas landed with the Red Sox in Fenway Park, which is perennially one of the best stadiums for getting hits on balls in play. Or if he made Yankee Stadium home, where he could boost his average (and his other stats) with more home runs.

Is your fantasy baseball team starting to slide back? Maybe it’s time to employ some last-ditch strategies to save your season… or at least go down with your fantasy guns blazing.

Manuel Margot, OF, Padres (63 percent owned): Margot has yet to have any significant bad luck on balls in play, but he is showing signs of becoming a more skilled hitter that could spill over into the second half. Since June 1, he has struck out in just 12.7 percent of his plate appearances, after having struck out at a 19.9 percent rate through the end of May. During this month-and-a-half stretch, Margot has hit .289, and the .324 BABIP he has compiled during that time does not seem too inflated for someone who has been making hard contact at a 46.4 percent rate and is among the majors’ fastest runners.

As someone who had a history of low strikeout rates in the minors, Margot is credible as a breakout candidate who has finally figured out how to make contact more frequently against major league pitching.

Nick Williams, OF, Phillies (46 percent owned): Williams has become more selective and a better contact hitter than he was in his rookie season, and his reward has been a batting average that has fallen from .288 in 2017 to .245 this year. Between his all-fields approach (see his spray chart below), long-standing line drive tendencies, and a strong aversion to popping out, Williams looks like the prototypical high BABIP hitter, yet he has a highly ordinary .290 BABIP at the break. His xBABIP is a much more believable .329, and even so, it is likely weighed down by a sluggish March and April, which featured a 25.0 percent soft contact rate. 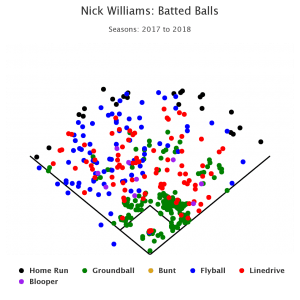 Williams probably won’t match last season’s .375 BABIP going forward, but he won’t need to in order to hit .280 overall in the second half. He just needs to stay close to the 22.4 percent strikeout rate he has compiled since the beginning of May and be a better-than-average hitter on balls in play.

Tyler Flowers, C, Braves (28 percent owned): In his first two seasons with the Braves, Flowers batted .270 and .281, so what has he been doing to deserve a .237 batting average this year? He has dramatically cut back on popups and on poorly-hit balls in general, raised his Value Hit rate by two percentage points (definition can be found here) and lowered his pull rate by more than six percentage points. Yes, those are all trends that should actually be increasing Flowers’ batting average. An uptick in strikeout rate from 22.2 percent last season to 23.6 percent in 2018 is hardly enough to neutralize all of the improvements he has made.

Even if you think Flowers is due for regression in his Poorly Hit, Value Hit and pull rates, that just brings him back to his 2017 profile. That set of indicators was good enough for a batting average and xAvg above .280. Flowers is widely available on virtually all sites, yet he is better positioned to help with batting average than any other catcher you might find on waivers (except possibly Omar Narvaez, who will provide little in the way of power and run production).