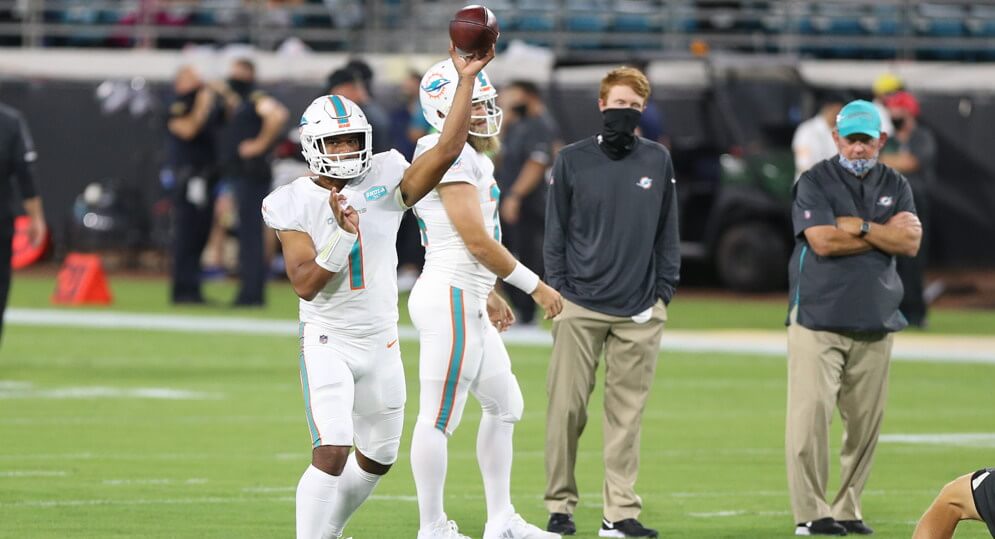 Wow. An NFL Football Sunday. Can you believe it? And what a glorious Week 1 it was. We certainly earned it. Now that the dust has settled, we have a little bit of a sample size to start adjusting our thesis on certain players/teams. Let’s take a dive into a few early fantasy takes from the AFC.

The Dolphins looked like a playoff team in Week 1. They took on a stout New England defense and were able to move the ball relatively efficiently. Tua went 16/27, 202 yards, 1 TD, and 1 Int. That’s nothing to call home about, but that’s to be expected against a defense like New England’s. Tua demonstrated command of the offense and he, along with the weapons around him, are only going to get more consistent going forward. Myles Gaskin averaged just under 6.0 yards per carry. DeVante Parker went 4/81. Jaylen Waddle went 4/81/1TD. They got absolutely nothing from Mike Gesicki (who is a stud), and Will Fuller V is still suspended. If you were someone who waited to draft a QB, go ahead and make the move to roster Tua right now. This is an offense with incredible speed. They are going to be scoring close to 30 points per game by the middle of the season. Tua will have another tough matchup ahead of him facing Buffalo this week, but Tua looked much better than Ben Roethlisberger, who took down the Bills this past week.

Unfortunately, these were my words on Hardman before the season started: “With Sammy Watkins gone, Hardman is no longer relegated to the snaps that had three and four receivers lined up. He’s going to be an every-down receiver this year. That means he’s going to get last year’s numbers in his sleep.”

I think this was dead wrong. The Chiefs won a shootout against the Browns in Week 1, and they decided that Sammy Watkins leaving meant more targets for Tyreek Hill and Travis Kelce. Hill had 11 grabs for 197 yards and 1 TD (absurd). Kelce had 6/76/2 TDs. Hardman? 3/19 on 3 targets. The Chiefs aren’t even using him as a gadget, end-around runner anymore. His speed intrigued me when he was drafted, and that interest has never waned in this high-powered offense. Until now. I’ve finally come to the realization that Hardman is only going to get touches when Hill is up against a Jalen Ramsey-esque lockdown corner. The Chiefs don’t have a need for a WR2, because their WR1 and TE1 are incredible. It is what it is. Move on before your league-mates recognize this too.

Brandin Cooks is the Only Rosterable Player on Houston

Don’t believe the hype. I’m begging you. Tyrod looked great going 21-for-33 with 291 yards, and 2 TDs, 0Ints. Mark Ingram had TWENTY-SIX CARRIES FOR EIGHTY-FIVE YARDS AND A TOUCHDOWN. I thought after an RB got to Ingram’s age, they were politely escorted out of the league. Not the case in Houston, apparently. What’s most important about these two stat lines is that they were completely correlated to their opponent. The Jags are likely the worst team in the league. The difference between these two rebuilds is that the Texans have an experienced QB who knows how to game manage. For the Texans that means giving Brandin Cooks all the touches he can handle. He went for 5 receptions and 132 yards against JAX. They’re facing the Browns this week, and the Chiefs made that defense look porous through the air.

While the Browns will be able to key in on Cooks, the game script will demand that Houston throw it a lot to keep up with the Browns offense. Cooks will get 10+ targets and that volume should be enough to compensate for being shadowed.

Great job from Brandin Cooks to go up and get this b/w two defenders, but holy smokes what a throw from Tyrod Taylor. Off his back foot, defender threatening him, and the ball still gets perfect arc for Cooks to go find it. pic.twitter.com/F910XtuC22