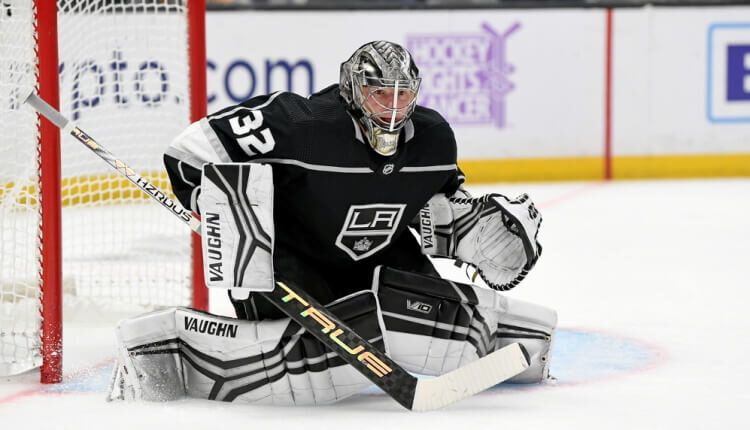 We’ve reached the point in the season where I, too, am looking for some Week 8 goalie grabs to help me along in some leagues. Things have looked bleak in the crease lately, and part of the problem is that there aren’t many great goalies floating around with low rostership. I hope all of the netminders on IR got together for Thanksgiving.

For those looking for season-long help, many teams have goalie situations worth monitoring. Seattle, Edmonton, and Vancouver have turmoil in the crease in one way or another and have goalies available in most leagues.

At the quarter-season mark, Linus Ullmark, Ilya Sorokin, and Logan Thompson rank first, second, and third among fantasy goalies overall. Only Sorokin went in the Top 100 picks during drafts, meaning there may always be players others are overlooking. For our purposes today, we’re looking for the best of the Week 8 goalie grabs.

I am here to recommend a couple of potential winners in the crease. The criteria are to aim for around 50% rostered netminders (though I’ll adjust for the right guys), good matchups, and good volume to fill your stat sheet in categories or points leagues. I’ll also throw in my confidence level regarding the grab.

With Frederik Andersen on IR, Raanta and Pyotr Kochetkov guard the net for the Hurricanes. Raanta had a stellar 2021-2022 campaign, starting 26 games and going 15-5 with a .912 save percentage and 2.45 GAA. In eight starts this season, he has four quality starts, a .901 save percentage, and 2.47 GAA. We can assume the save percentage will rebound to around his career average of .918 overall.

He is in this column, though, because Raanta’s home/road splits greatly favor road games, of which the Canes have three coming up against opponents who like to shoot. A lot. Raanta is the first of our Week 8 goalie grabs, and one I feel confident starting.

Looking at the bigger picture, this duo might also be a tag-team effort for fantasy squads. Carolina sits in the Top 10 in goals allowed per game at 2.77, and it’s always nice to roster goalies who sit behind good defenses. With Kochetkov rostered in even lower numbers, having both could be a strategy worth trying.

Allen has a few chances to “get right” this week against squads that love shooting but are struggling to put it together as a team. The 32-year-old has a paltry .891 save percentage and an absurd 3.61 GAA, which is an entire goal above his career average. The challenge for Allen is that he is playing behind a youth movement quite gifted at scoring with little to no interest in defending. My recommendation here is based on the positive regression I believe is nearby while also knowing that all three of these games could go the Habs’ way because these opponents aren’t big fans of defense either.

Allen is a risky Week 8 goalie grab, but I think he will rack up some good points for fantasy teams all the same.

Quick is another guy looking forward to rebounding numbers to get back to his career average. He had a terrible two-game run wherein he allowed 10 goals on 55 shots, but those were significant outliers compared to the rest of his year thus far. Thanks to those two starts, his save percentage is under .900, and his GAA crept above 3. While the 36-year-old isn’t a spring chicken, the Kings seem to be balancing his workload well to keep him fresh.

Quick’s home/road splits certainly favor these three games this week. He has a save percentage of .908 and GAA of 2.70 when he’s in L.A. Seattle is in the Top 10 in scoring, but Arizona and Carolina are next to each other at 27 and 28, so fantasy managers will have a chance to accrue some wins on top of other stats by choosing him as a Week 8 goalie grab.

That’s all for this week. I wish you all great success as we pass through the quarter mark of the 2022-2023 season. And, as always, good luck!