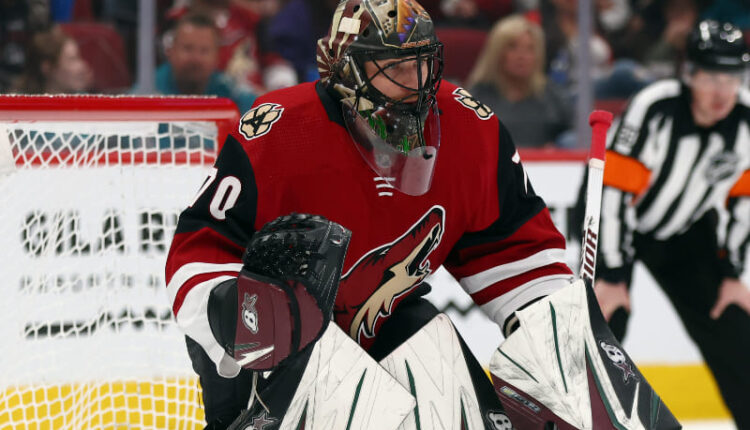 Welcome to your fantasy hockey Week 16 goalie grabs! After a beautiful week in Mexico, I returned to the land of snow and ice, and I went back to the fantasy hockey grind. Now that I’ve gone an entire week without any sunshine at all, I’m definitely feeling like a writer again.

We’re past the season’s halfway point and cruising toward the trade deadline. Those of you in redraft leagues can continue looking for upgrades on waivers or trades that fill the holes you are most definitely aware of by now. Those in dynasty leagues need to evaluate whether they are in the running this year or should look toward next year. This is the time to start flipping some assets for youth or salary savings if you are in the latter. For those in the first group, let loose and have some fun.

Our focus here, of course, is optimizing the goalie position for our fantasy teams. We’re looking for netminders with preferable schedules and matchups to exploit in order to maximize our output. I try to aim for goalies rostered in 50% of leagues, but there is a wild difference in rostership percentage depending on your platform. That said, these are your best Week 16 goalie grabs.

Believe it or not, Merzlikins may be better than his stats appear. You aren’t streaming him for his wins; he is 1-7 in road games this season. But his save percentage is slightly higher away from Columbus, and the Blue Jackets will continue to put him out there to face these four high-powered offenses. Merzlikins is in line for a lot of saves and high volume in Week 16. Unless goals allowed is a ratcheted-up negative stat in your league, the 28-year-old is worth a Week 16 goalie grab.

Anytime you can grab a goalie from the team ranked 3oth in xGF (expected goals for) in a matchup against the team ranked dead last in the same stat category, you pretty much have to do it. It would be even better if you could possibly get them to meet up twice in one week. Good news! The perfect storm has arrived. We can look at this matchup in basic stats or advanced ones to express how bad it actually is. Anaheim has allowed over 200 more shots than any other team in the NHL, meaning Gibson will rack up saves against a poor-shooting team. Both Anaheim and Arizona have a Fenwick 5v5 FF% of around 43%, meaning neither team knows how to control the puck for even half the game. Essentially, what we’re looking at here is a very movable object against a very stoppable force. The excitement is real for this Week 16 goalie grab.

The ever-amazing Dobber Hockey released their midseason hockey guide and had this to say about Vejmelka:

Vejmelka won’t win many games, but he’s an exceptional netminder making the most of a poor situation. The fact that half of his games so far are quality starts, even though he’s given up at least three goals in half of those quality starts, is a testament to how great he has been.

Indeed, in 32 games, Vejmelka has only had three that qualify as a Really Bad Start. (In 49 starts last season, 14 of them were RBS.) My personal favorite stat comparison is the 26-year-old’s goals saved above average (GSAA) compared to his expected GSAA. GSAA measures the goals a goalie prevented, given his save percentage and shots faced compared to the league average save percentage against the same number of shots. Vejmelka’s GSAA is -3.7, but his adjusted GSAA is 3.42.

This week, he runs up against Anaheim (see above) twice and St. Louis with no back-to-backs on the schedule. If he is available in your league, pick him up as a Week 16 goalie grab. And hold him until further notice.

That’s all I have for this week. It’s nice to be back. If you have any thoughts, questions, or pictures of the sun, hit me up on Twitter at @thewonkypenguin.