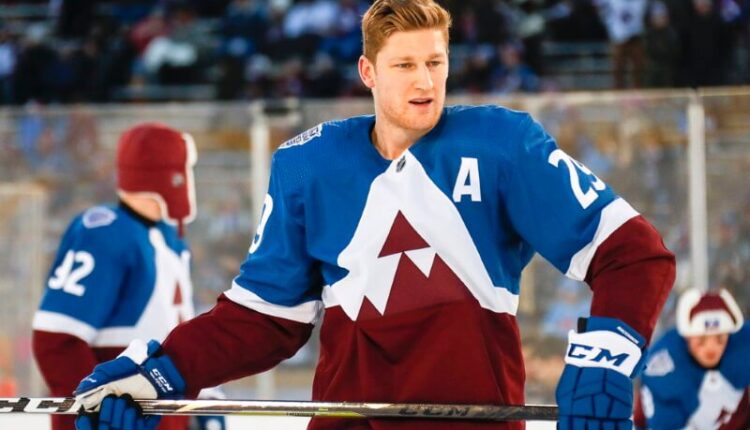 It’s January 3, so I can officially offer my heartiest Happy New Year! to everyone, and I hope you all have an excellent start to 2023. I’m again filling in for Brandon Altomonte to offer our best fantasy hockey Week 13 waiver wire pickups.

Fantasy managers welcomed back Nathan MacKinnon, who rang in the new year with a goal on eight shots after putting up a -3 on the last day of 2022.

The NHL celebrated the calendar change with one of the best Winter Classic games in recent memory and created a crossover event among baseball fans who would be 100% on board with the Red Sox front office signing Brad Marchand to a contract.

I am obsessed with this picture of Brad Marchand.

Pretty sure he could outplay at least 3 or 4 guys on the Red Sox projected opening day roster. https://t.co/fSCAXAT6N0

Of course, everyone was in on the group discussion of the actual hockey jerseys. Whoever designed those should be given the reins to the entire NHL closet and see what happens.

Better Winter Classic uniforms. Who you got? pic.twitter.com/KzXLM8xbTr

Okay, I’m done. Honestly, this is a fantastic time to be a hockey fan and play fantasy hockey. And right now is when we can make some strong waiver wire moves to boost our teams as we near the halfway point of the year and begin our playoff pushes. Let’s look at our best fantasy hockey Week 13 waiver wire options without further ado.

All roster percentages are from Yahoo and are current as of Tuesday afternoon.

Conor Sheary has seven points in his current five-game points streak and 27 points through 40 games this season. He does a little of everything consistently, and his TOI sits above 16 minutes per game. With the rash of Washington injuries, he now plays on the top line, flanking Dylan Strome and across from Alex Ovechkin. Skating with those two is rife for points opportunities, and Sheary makes those opportunities count for fantasy teams. His numbers also seem to align with his career averages, so fantasy managers can trust he’s not just riding the hot hand.

Brandon Hagel is seeing 18 minutes of ice time on the top lines for Tampa Bay, and he is capitalizing on that, collecting 30 points in 36 games. He has divided his point total equally between goals and assists, so fantasy managers in categories leagues should particularly pay attention. Far beyond that, a top-6 guy on a top-10 offense should not only be rostered in half of the leagues. If Hagel is available, make him your priority fantasy hockey Week 13 waiver wire pickup.

Since December 20, Calle Jarnkrok has scored three goals and three assists while skating in the top 6 for Toronto. He is only playing 13 minutes a game, but the Maple Leafs have been scoring more goals of late and are involving Jarnkrok more during power plays as well. He also has some position flexibility for those needing to fill a couple of spots for injuries. Jarnkrok is more of the “ride the hot hand” type of waiver pick up but still has value.

Adam Larsson is currently riding a seven-game points streak and averages 24 minutes of time on the ice each game. The Kraken is surprisingly deep and doing some terrific things from a fantasy standpoint, and Larsson is one of the primary reasons. Even if and when the points drop off, the 30-year-old makes up for it in other categories. In 36 games, he has tallied 16 points, 62 SOG, 98 hits, 77 blocked shots, and 27 PIM, and he is a +17 for the season. Particularly in Yahoo leagues where +/- counts, Larsson is a tremendous blue-line asset and should be a top fantasy hockey Week 13 waiver wire pickup.

Arber Xhekaj was recently added to the Canadiens’ power-play unit and infused some life into the bottom-ranked Montreal unit. Xhekaj is best added only in deep leagues, but there is value to what he is doing and the potential for more. He has 12 points in 36 games with 60 shots on goal, 108 hits, and 31 blocked shots. If you are looking for a defenseman with upside, Xhekaj plays for a terrible team ranked in the bottom five in both shots for and shots against. There is no reason to keep him buried in the depth chart, so look for him to gain more chances as we go forward.

While my editors haven’t told me directly, I have been encouraged to stop shoving my love or Karel Vejmelka into every article I write. Therefore, I shall pivot to yet another Kraken.

I’m excited that all of my readers are beginning to wonder if I am a Seattle fan and let me tell you, the way some of these Oilers games have gone, I might be willing to look into it. Before that, though, I’ll just tell you that Martin Jones has played in 26 games and has a record of 16-5-3 with a very nice 2.92 GAA and a mediocre .890 save percentage. He has had six Really Bad Starts (RBS), but the solid defense ahead of him should consistently help maintain the wins. He has definitely moved ahead of Philipp Grubauer on the depth chart, so he will have plenty of opportunities to boost your weekly matchups.

That’s all I have for my fantasy hockey Week 13 waiver wire suggestions. If you have any thoughts, feelings, ideas, or memes you’d like to share, hit me up on Twitter at @thewonkypenguin.

Fantrax was one of the fastest-growing fantasy sites over the last few years, and we’re not stopping now. We are the most customizable, easy-to-use, and feature-rich platform in the industry, offering the greatest fantasy experience for your dynasty, keeper, redraft, and best ball leagues. Fantasy sports doesn’t sleep, and neither does Fantrax, with seasons running 365 days a year. Take your fantasy leagues to the next level now at Fantrax.com!
fantasy hockey waiver wire
Share