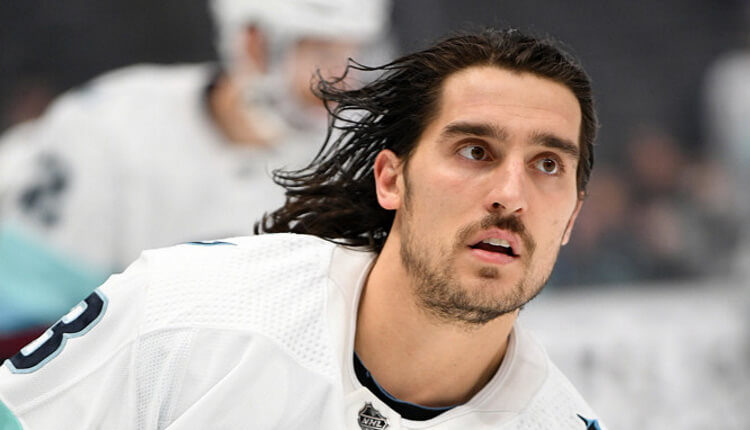 Happy Week-Between-the-Holidays, everyone, and welcome to your fantasy hockey Week 12 waiver wire suggestions! I often struggle to decide how best to fill this time, caught between wanting to do everything and nothing in a five-day period.

For instance, I have grand plans to get my four-sport leagues into order, write up a series of articles about best practices, rankings, etc., and write my own player profiles for at least 300 MLB players. I also strongly desire to watch all of the movies in the “Die Hard” franchise while drinking mimosas until it is time for Old Fashioneds.

“Do both!” you may shout at me, but you’re too late because I’m already stretched out for a nap. Too many choices, wore myself out.

What I will for sure do is offer up some fantasy hockey Week 12 waiver wire pickups so we can at least kick off 2023 with an improved squad with which to attack the rest of that sport’s season. I’m filling in for the great Brandon Altomonte, who is off due to impending fatherhood expansion duties. If you have thoughts on how else I should spend my weird in-between holiday week (that are friendly and legal), hit me up on Twitter at @thewonkypenguin.

Without further ado, pour yourself an Irish coffee, settle in, and nab some of these guys in your leagues.

The first of our Kraken recommendations is the 26-year-old center, who has 22 points in 29 games so far this season. His shooting percentage is an unsustainable 26.2%. Still, he is having no trouble finding space for SOG. He is quarterbacking the top power-play line aside Matty Beniers and Jordan Eberle, providing an abundance of opportunities to fill the stat sheet. He is a +7 and has kicked in 24 hits and five blocked shots to boot while being available everywhere. Ride the heat wave while he’s on it.

For a guy only rostered in 13% of leagues, Tanev is sure filling up fantasy categories with panache. (His official picture should also be in the Headshot Hall of Fame.) At 32 games in 2022, he has surpassed his games played last season and is demonstrably more effective. He has tallied 16 points with 50 SOG and a shooting percentage that is still a couple of ticks underneath where his career average is. Serving as an enforcer, he has 81 hits, 32 blocked shots, and 17 PIM while sitting at a +15 for the year. His lack of power-play time means he isn’t going to be the savior of your squad, but he will certainly contribute and is a great fantasy hockey Week 12 waiver wire pickup.

Staal is this week’s “Grab him while he’s hot” pick. He has seven points in his last four games and is playing over 16 minutes a night on a team that likes to score. While his shooting percentage is about six points higher than his career average, he has 78 hits, 14 blocked shots, and 10 PIM that will help fantasy managers in some overlooked areas. Staal is a temporary add, but it could be a very hot and heavy version of “temporary.”

The 30-year-old is the primary beneficiary of Washington’s injuries, but he is capitalizing on it thus far. Gustafsson has been hot of late, picking up seven points in his last four games before the holiday break. He is seeing 19:22 minutes of ice time per game on the top line for a Capitals team that is middle-of-the-road in scoring but is still led by Alex Ovechkin and his pursuit of the all-time goals record, having just passed Gordie Howe to sit alone in the second slot. For those with defense categories, he has 27 hits, 36 blocked shots, and 17 PIM on the season and is a +2 overall. Fantasy managers who need blue-line help can benefit from his opportunities.

Miller offers fantasy managers something they need in the middle of the season when they are searching for injury replacements: Ice time. He played in every game last year and has played in every game thus far in 2022 while averaging 22:09 minutes on his skates. He has 16 points in 35 games, but his shot percentage should improve while he continues to collect hits (76), blocked shots (41), and PIM (16) for those in leagues where those are helpful. Sometimes in fantasy hockey, all you need to pull off close wins are guys who will be there night in and night out. Miller is definitely that guy.

The Sabres cruised into the holiday break on a four-game win streak which saw them score 18 goals while allowing only six. I have covered Anderson extensively in my goalie grabs articles, so I’m going to mention Luukkonen as a decent Week 12 fantasy hockey waiver wire add. The 23-year-old is progressively improving, sitting at 5-3-1 on the year with an ugly 3.56 GAA and a .888 save percentage. His ROS projections, though, have both of those numbers evening out to around 3.00/.901 mark, which is much easier to swallow for fantasy managers. Coming out of the break, Buffalo’s opponents look like prime options for either of these guys to get you saves and wins, and they are widely available.

Man, Boston is blessed with some netminders. I know Swayman is a little more highly rostered than we usually mention, but if he is out there, grab him. Sure, Ullmark is the current second-most valuable goalie in fantasy hockey, but this 23-year-old is no slouch in the crease. He has a GAA of 2.65 and a save percentage of .898, but both of these are expected to improve. Beyond all of that, though, is the simple fact that having pieces of a team as dominant as Boston has been this season can’t hurt you, so Swayman is a sneaky good fantasy hockey Week 12 waiver wire add.

Fantrax was one of the fastest-growing fantasy sites over the last few years, and we’re not stopping now. We are the most customizable, easy-to-use, and feature-rich platform in the industry, offering the greatest fantasy experience for your dynasty, keeper, redraft, and best ball leagues. Fantasy sports doesn’t sleep, and neither does Fantrax, with seasons running 365 days a year. Take your fantasy leagues to the next level now at Fantrax.com!
fantasy hockey waiver wire
Share