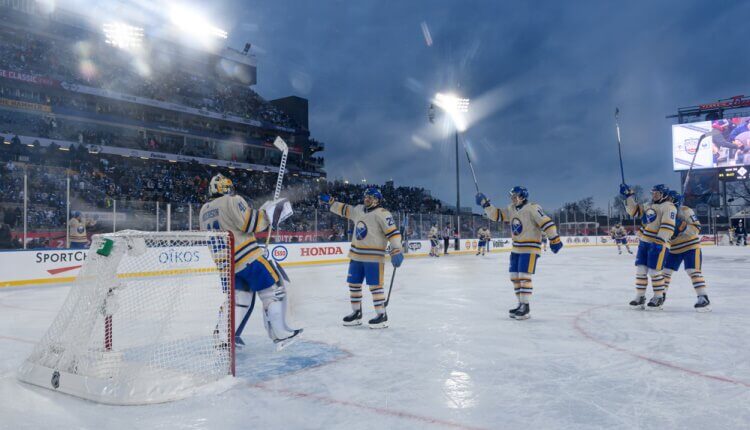 The holiday season is in full swing, and with it comes gifts, food, and fantasy hockey Week 10 goalie grabs. In light of some key injuries, the landscape heading into the next seven days looks quite different than previous iterations of this article.

While I doubt many of you added “streaming goalie options” to your Christmas list, I am here to provide that gift anyway. Just think of me as your aunt who, year after year, gave you the gift of peach-flavored lotion from Bath & Body Works because you mentioned once that you sort of liked how it smelled.

If that seems like too specific of an example… Well, let’s just say I would have enjoyed some streaming goalie options once in a while.

I am here to recommend a couple of potential winners in the crease. The criteria are to aim for around 50% rostered netminders (though I’ll adjust for the right guys), good matchups, and good volume to fill your stat sheet in categories or points leagues. I’ll also throw in my confidence level regarding the grab.

Talbot is rostered at a higher number than we usually look for, but he may be available for very appealing matchups in Week 10. In 14 appearances (12 starts), he has a save percentage of .909 and a GAA of 2.76, which are directly in line with his expected numbers. Nine of his 12 starts have been quality starts, while the other three qualified as really bad starts (RBS). Talbot should get three of the four starts, with Detroit and Minnesota being the only back-to-back. Only Minnesota poses a genuine offensive threat, and all four opponents rank in the bottom half of the league in goals scored per game. If Talbot is available, he is an excellent Week 10 goalie grab.

If you’re unfamiliar with my goalie work, I love two netminders more than most. The first is Karel Vejmelka, whom we will not discuss this week. The second is Craig Anderson, who is the same age as me, and since I think I might have pulled a hamstring while sleeping last week, I will marvel at him until he retires.

However, Anderson has some good energy here. All three of these games are spread out, allowing good rest in between, and his only competition is Ukko-Pekka Luukkonen, whose next game will be the 21st of his career. Anderson has a save percentage of .912 and a GAA of 2.97, with a goals saved above average (GSAA) of 2.8. GSAA measures a goalie against the league average to create a relative stat. (Luukkonen, for reference, is -8.8.)

The Sabres can score in droves, but to make the playoffs, they will need some serious help in net. They are second in the league in goals scored per game at 3.86, and right now, Anderson is their best option. He is the true definition of a streamer and a great Week 10 goalie grab.

On the opposite end of the age spectrum sits Kochetov, the 23-year-old second-year goalie, who has been thrust into action with Frederick Andersen on the IR. He eclipsed Antti Raanta as the Hurricanes’ No. 1 in short order. In 11 games (10 starts), Kochetov is 6-1 with a .918 save percentage, a GAA of 2.21, two shutouts, and seven quality starts. Three of the four opponents this week are in the Top 10 in goals scored per game, so fantasy managers who stream him should be able to rack up saves and pull out a couple of wins. (Dallas and Pittsburgh are back-to-back, but given the caliber of those two teams, it will be interesting to see how Carolina plays it.)

I love Kochetov as a Week 10 goalie grab and beyond; he seems like a solid choice on a good squad. And I would much rather have him than yet another bottle of peach body lotion. Keep that in mind while you shop for me this Christmas.

And, as always, good luck!