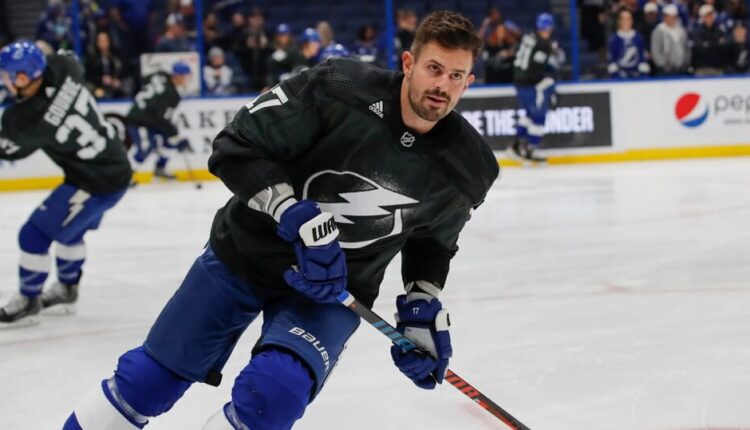 When you’re looking through the waiver wire players, you might only check the first handful of names, then settle on a player. This waiver wire report proves why you can find gems when you take a deep dive down into the waiver wire. Whether you need to replace an injury, a slumping player, or just want to give yourself a boost, the fantasy hockey waiver wire is here to assist.

Killorn has been on a tear, racking up 10 points in his last eight matches. This includes a three-point effort in his most recent outing, where he scored the overtime game-winner. He’s playing on a line with Steven Stamkos and Nicholas Paul – the whole trio has been great offensively. Killorn also averages 2:41 of power-play time per game, so he’ll always have plenty of offensive firepower on the ice with him. Even when his scoring tails off, he’s still a decent secondary scorer for fantasy rosters.

Tatar is having an incredible bounce-back campaign. Last year, he posted 30 points in 76 games with a minus-22 rating. This season, he has 11 points in 16 games, with a plus-13 rating. The Devils as a whole have been a much-improved team this year, as noted by their 10-game win streak. Tatar is just coming off a seven-game point streak, where he amassed two goals and seven assists. He’s playing on the top line with Nico Hischier and Fabian Zetterlund (who makes for a good waiver wire add too). Tatar also sees secondary power-play minutes, although all of his points have been generated at even strength.

While Erik Karlsson has been doing most of the scoring for the Sharks, they have some other players chipping in too. Barabanov has scored two points in two of his last three tilts. He’s up to 10 points in 14 appearances. 2021-22 was his first full NHL campaign, and he scored 39 points in 70 games. That would put him at a 45 point pace over 82 games. Meanwhile this year he’s at a 58 point pace over 82 games. Barabanov is a fixture in San Jose’s top six, and plays on their top power-play unit. He’ll receive plenty of opportunities all season in a scoring role.

Prior to this season, Ruzicka had just 31 games of NHL experience, while scoring 11 points. The 2017 fourth round pick has quickly earned the trust of the coaching staff. He’s playing on the top line with Elias Lindholm and Tyler Toffoli. Ruzicka is also getting some time on the second power-play unit. The result of this expanded role is five points in five games, including two multi-point efforts. It’s not often you’ll find a player with such a prime opportunity available in so many leagues. He’s worth grabbing off the waiver wire for as long as he can hold that top line spot. Maybe he’ll get a long look there and end up being a steal.

If you thought Ruzicka got a great opportunity early, then you’ll be interested in Parssinen. A 2019 seventh-round pick, he played his first game – his first NHL game – on the top line. He also played on the top power-play unit. Oh, and he scored a goal. Not often do we see a scenario like this play out. Parssinen is playing with Filip Forsberg and Mikael Granlund and is easily worth a waiver wire claim while he’s in this position. Parssinen did well in the AHL, scoring nine points in 10 games. If his offense translates to the NHL, that could leave us with another steal on this list.

Half of the Blue Jackets’ defense is injured. This includes Zach Werenski, who’s expected to miss the rest of the season. Jake Bean was set to be the one to take Werenski’s power-play role, but Bean was injured and considered day-to-day. Gavrikov becomes the de facto number one D for Columbus. He played 28:40 in his most recent contest, scoring an assist and the overtime game-winning goal. He has just four points through 15 appearances this year. But he did score a career-high 33 points in 80 games last season. His current level of production should increase going forward, especially if he gets significant power-play duties. Gavrikov has also provided 19 shots, 19 hits, and 28 blocks.

In 16 games Marino has two goals, six assists, eight PIM, 21 shots, 17 hits, 16 blocks, and a plus-9 rating. He doesn’t wow you in any particular category, but he provides value across the board. Marino started the season being held off the scoresheet in the first five contests. Aside from that, it’s been a very successful start to his tenure as a Devil. With eight points in his last 11 games, it won’t be easy to find that level of production just anywhere. Better scoop up Marino off the waiver wire to lock that in for yourself.