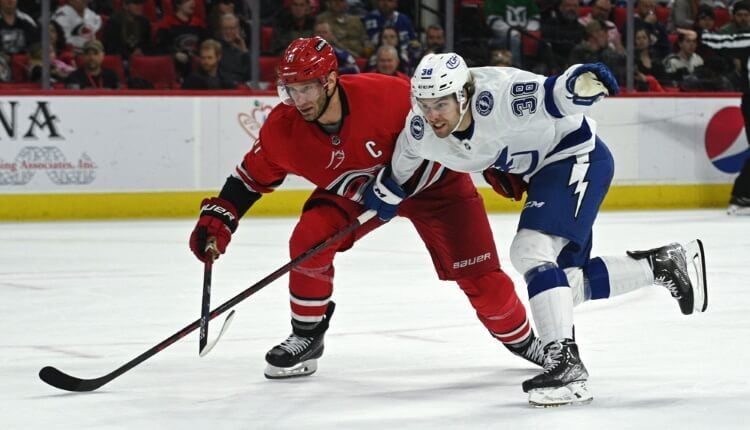 This is a very opportunistic week, as many players are making the most of their situations. Whether you need to replace an injury, or a slumping player, or just want to give yourself a boost, the fantasy hockey waiver wire is here to assist.

Benn’s turning back the clock, as he has 11 points in 13 games. He hasn’t been on a point pace this good since the 2017-18 season when he posted 79 points. What’s the clear improvement for Benn this year? The power play. He’s scored seven of his 11 points from the man advantage. To put that into perspective, in 82 games last year he had 11 power-play points. He’s getting third line deployment at even strength, but on the power play, he’s with Jason Robertson, Roope Hintz, Joe Pavelski, and Miro Heiskanen. Playing with all the top offensive threats has brought out the best in Benn.

Hagel didn’t produce as much as expected when he was acquired by the Lightning last trade deadline. He had just seven points in 22 games. This year he’s turned that around. Hagel has 11 points in 13 matches. He’s playing on the top line with Brayden Point and Nikita Kucherov, which makes Hagel an easy decision to add from the waiver wire. He’s averaging 17:28 of ice time and plays on the second power-play unit. As long as he remains on that top line, he’s worth rostering. He has five points in his past three games to remove any doubt.

With eight points in 13 appearances, Paul is on pace to easily surpass last year’s 32 point total. He’s centering Tampa Bay’s second line, flanked by Steven Stamkos and Alex Killorn. Just like with Hagel, that top six role makes Paul a no-brainer to pluck from the waiver wire. He’s coming off of a five-game point streak consisting of three goals and three assists. Even when he’s not scoring, he can pitch in for some peripherals with his 25 hits and 14 blocks.

Injuries limited Wood to just three games last season, but he’s back and playing some of the best hockey of his career. He’s off to a great start with eight points in 13 contests. It would be no surprise to see him top his career-high 32 points that he set back in 2017-18. Wood is a waiver wire claim for those in deeper leagues though. His scoring can be streaky. Just this year he had a six-game point drought, followed by a four-game streak in which he amassed seven points. He’s getting time on the power play, including two or more minutes in each of the past three outings. He’ll also help you in other areas, with his 29 PIM, 17 hits, and plus-7 rating.

While he wasn’t acquired by the Islanders for his scoring, Romanov has four points in his past seven tilts. Those are his only four points on the campaign, but it shows he’s finding some offense for New York. His main draw is his peripherals. He has eight PIM, 30 hits, 37 blocks, and a plus-7 rating. Averaging 20:18 of ice time per game, he’ll be a reliable source of hits and blocks if you need a supply for those categories.

John Carlson is on injured reserve, Dmitry Orlov is out day-to-day. Name a Capital, and there’s a good chance he’s currently injured. Gustafsson is the next man up, as he has to try and fill some of the void. His average ice time is 17:17, but that’s been bumped up to 22:48 and 24:33 the past two meetings. He takes Carlson’s role on that top power play, on the unit with Alex Ovechkin and Evgeny Kuznetsov. Gustafsson picked up three power-play assists in his most recent contest, and there is surely more of those to come. He has six points through 14 games on the season.

Philipp Grubauer and Chris Driedger are sidelined, leaving Jones as the Kraken starter. He’s done very well in the role, posting a 7-3-1 record with a 2.45 GAA and .907 save percentage. He’s won four straight contests (one via shutout) allowing just four goals in the process. His overall save percentage isn’t fantastic, but in those past four outings he’s posted a .946 or better each game. Jones was the starter for the San Jose Sharks for several years, so he’s certainly capable of handling the starter duty again.

The Hurricanes starter Frederik Andersen suffered an injury during practice. The extent of the injury is unknown, but Rannta becomes the starter in the meantime. He has a 3-0-1 record with a 2.42 GAA and a .905 save percentage. He’s no stranger to filling in as the starter given Andersen’s injury history. Raanta has a lengthy injury history too, so Pyotr Kochetov could become a viable option as well. Especially with a back-to-back on the schedule. Carolina is among the better defensive teams in the league, giving any of their goaltenders plenty of support.