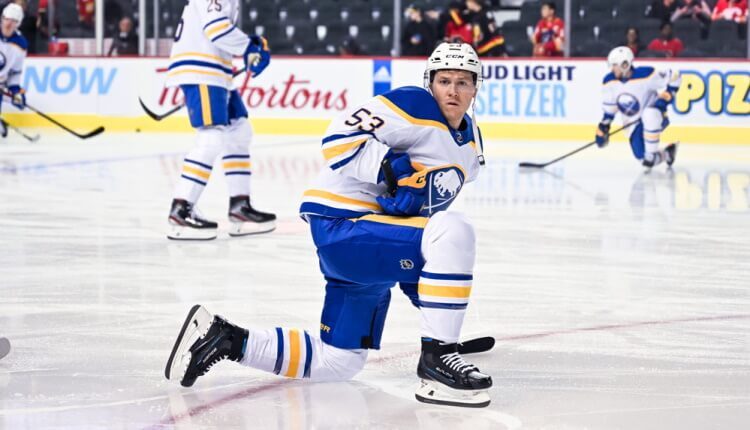 We’re starting to see the injuries pile up around the league. If you happened to get hit by these, you’ll need to find a replacement that you can roster with confidence. Even without injuries, knowing who can be found on the waiver wire certainly helps with managing your team to get the best possible results.

Skinner had an abysmal 2020-21 season with just 14 points in 53 games, but he rebounded quite nicely last year. Skinner scored 33 goals and 63 points – the fourth time he’s had exactly 63 points, which is a career-high. He’s continuing on that path again this year, starting out with eight points through nine contests. He’s playing on the top line with Tage Thompson (who just had an incredible six-point performance) and on the top power-play unit. Maybe this is the year Skinner finally scores 64 or more points.

Hayes has done incredibly well to start the season. The Flyers had key injuries and no expectations but have come out flying. Hayes has taken on the top center role with Sean Couturier sidelined. The added responsibility has led to Hayes scoring a goal and nine assists through nine contests. He has five points from the power play, along with five hits, and four blocks. I fully expect Hayes’ production to wane as the season progresses. However, he’s a worthwhile waiver wire add in the short term.

Arvidsson had a slow start to the season. He had back surgery for a herniated disc in May, so a slow start was to be expected. He appears to have shaken the rust off, as he has points in three straight contests and six points in his past five outings. Playing on the Kings’ second line and second power-play unit, Arvidsson will be relied upon for offense. I project for him to finish with over 50 points, making him a decent secondary fantasy scorer to add from the waiver wire.

Karlsson had a stretch where he was blanked in four out of five games, but he’s now produced points in three of his last four matches. His point totals have been declining in each season he’s been in Vegas, but I think he bucks that trend this year. He has eight points through 11 appearances. Karlsson is chipping in for the peripherals with a plus-6 rating, 22 shots, eight hits, nine blocks, and a short-handed assist. He’s cemented in as the second-line center and should continue to flourish on a thriving Golden Knights club.

I wanted to put Zucker on last week’s waiver wire report, but he got injured. Thankfully he only missed two games, and is back in action. Zucker is enjoying a hot start, with seven points in eight appearances. He dishes out a decent amount of hits too, with 25 on the year. He’s playing on the Penguins second line and second power-play unit. Zucker has had some tough seasons lately, with 18 points in 38 games in 2020-21, then 17 points in 41 games last year. It looks like he’s finally going to bring the offense that was expected when the Penguins acquired him.

Jensen is coming off a career-high 21 points in 2021-22. He’s not known for putting up the points. However, he’s already a third of the way there, picking up seven points through 11 outings this season. To help those stats, he also has 14 shots, 17 hits, 21 blocks, and a plus-6 rating. Jensen is chipping in on several categories and will be able to contribute even more for the time being. With John Carlson out day-to-day, Jensen is slotted on the Capitals’ top pairing.

Chicago’s No. 1 defenseman Seth Jones is on injured reserve and expected to miss three to four weeks. Who gets to fill in on the top power play in his absence? His brother Caleb of course! Jones is seeing 20 minutes of ice time most nights, and now getting plenty of time on the man advantage with 5:47 in his last game. He’s making the most of it, with five points in the past five games, including two on the power play. It’s not too often you see defensemen who have top power play duties with such a low rostered percentage. For anyone in a league where the blue line options are limited, Jones is a sound option you’ll likely find on your waiver wire.