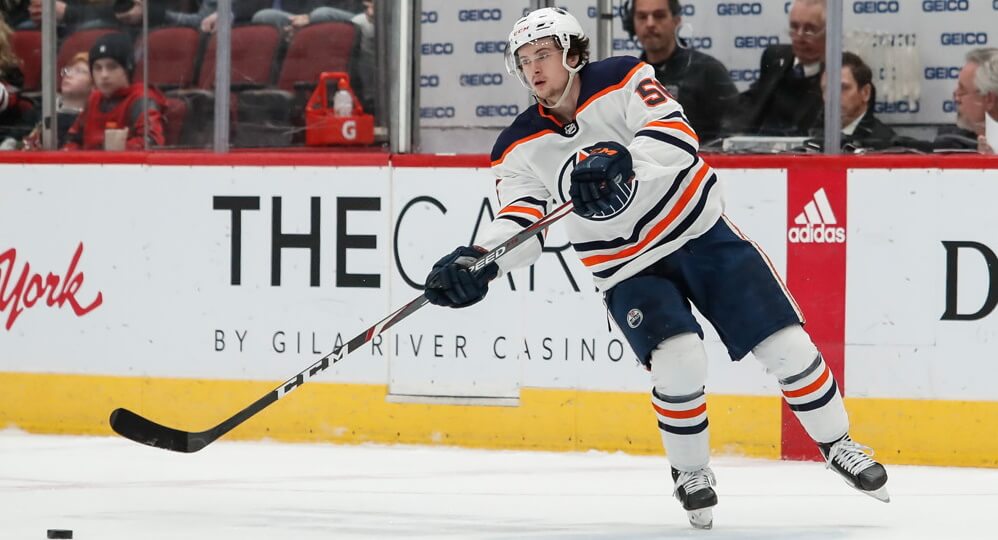 Welcome back for another edition of the Fantasy Hockey Waiver Wire Report. Several names can be found here that you may not have expected, but their production is hard to ignore.

RW Kailer Yamamoto, EDM (57%): Would you believe me if I told you Yamamoto has 14 points in 15 games? It may come as a surprise, but that’s the reality we live in. Playing on Leon Draisaitl’s wing has allowed Yamamoto to flourish. He saw over 20 minutes of ice time — including 2:57 on the power play — in his most recent appearance. The Oilers have developed him in the minors, and are reaping the rewards for this 2017 first-round pick. While it’s unlikely for him to continue scoring at a point-per-game pace, he is playing with the NHL leader in points, so don’t rule out the possibility.

RW Kevin Fiala, MIN (46%): The Wild winger has been on a tear lately, racking up 10 points in his last five matchups. Six of those points were generated from the man advantage. Fiala’s confident with the puck right now, as he’s taken 26 shots over those five games. He’s up to 14 goals and 38 points through 51 contests. He’s playing on Minnesota’s top line and first power-play unit, giving him plenty of opportunities to succeed.

RW Mikael Granlund, NSH (39%): Speaking of Fiala, let’s also talk about the man he was traded for. Granlund has not had a good year by his standards. With just 22 points in 49 games, he’s on pace for a career-low in points. However, he’s recently started to pick up his play. He has seven points in his past 10 outings, six of which being goals. He’s helping his Predators quickly rise in the standings, putting them within striking distance of a playoff spot. We know the talent he possesses, and if being in the playoff hunt will help Granlund’s production, he could be a worthwhile waiver wire claim down the stretch.

LW Milan Lucic, CGY (10%): It wasn’t that long ago critics thought Lucic had completely forgotten how to play hockey. Don’t look now, but he has five points in his last two games. He has 16 points in 55 appearances. He’s matched his goal total (six) from last season and is just four points shy of matching last year’s point total, in which he took 79 games to do. The change of scenery has been beneficial, despite it taking him quite a while to get going. If you’re considering Lucic though, hits have to be the main target. He has 156, which actually has him on pace to finish with 25 fewer hits. However, those 156 hits still rank him in the top 15 in the NHL for that category.

D Mike Matheson, FLA (16%): Matheson has a pair of three-point nights in his last five games. What makes this more interesting? One of those nights he played forward, on a line with Noel Acciari and Mark Pysyk. The Panthers dressed eight defensemen during Tuesday’s win over New Jersey. This means four defensemen would have been on the ice at the same time and scoring. While Matheson doesn’t have forward eligibility, he might earn that should he continue to produce at the position. Besides, it never hurts to get forward-like scoring out of a defender. Is Florida trying to emulate the success of Brent Burns?

D Stephen Johns, DAL (12%): Johns is finally back on NHL ice after taking the entire 2018-19 campaign off due to post-traumatic headaches. Many thought his career was finished, but Johns wouldn’t allow that to happen. While not an established fantasy producer, he does have four points in seven outings. He isn’t playing every game, and that’s allowing for an easier transition back to the NHL. If you’re in a deep league and could use his 25 hits and 10 blocks, Johns can bring some value to your team.

G Jack Campbell, TOR (40%): Wins were hard to come by playing for the Los Angeles Kings, who sit at the bottom of the Western Conference. Going to Toronto gives Campbell a chance to see more success. Especially right away, given that the Leafs acquired Campbell due to Frederik Andersen being out with an upper-body injury. Campbell has gone 2-0-1 in his three appearances in the blue and white, facing at least 30 shots each matchup. He makes for an easy add for all Andersen owners, as well as anyone in need of a starter.

Also, check out our last edition of fantasy hockey waiver wire picks to see if any of those players are still available.