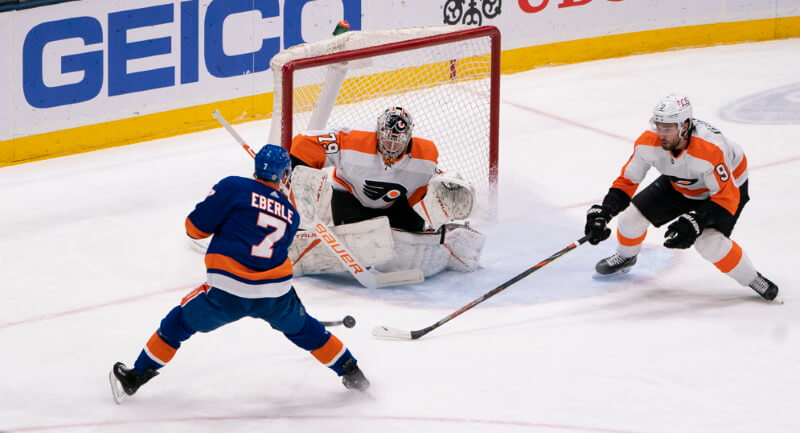 Welcome to the first fantasy hockey waiver wire report after the NHL trade deadline. The Bruins were the team to watch last week, and that remains the case again here, especially after making some trades. With leagues approaching playoffs or having already started, the number of games remaining will be a focal point.

C/RW Jordan Eberle, NYI (56%): With 14 goals in 42 contests, he’s just two goals shy of last year’s total, while playing 16 fewer games. Eberle has six points in his last six games, playing on the top line and first power-play unit with Mathew Barzal. The Islanders have three games remaining this week, after coming off a three-day break. As usual with Eberle, he doesn’t wow in other categories, but rather he’s a reliable source of secondary scoring on fantasy teams.

LW/RW Jesper Bratt, NJD (38%): Bratt just had a five-game point streak snapped when his Devils were shut out by the Rangers. These two teams meet again three more times this week, and it’s unlikely New Jersey is held off the scoresheet each time. Bratt is one of the Devils’ offensive drivers, as he’s tied for the team lead in points with Pavel Zacha, each having scored 25 points. With Kyle Palmieri and Travis Zajac traded out at the deadline, the Devils will need to rely on Bratt more going forward. He’ll be a mainstay in the top six and is manning the point on the top power-play unit.

RW Craig Smith, BOS (30%): He was featured in last week’s waiver wire report, due to the Bruins having so many games to play. Any Bruin was worth it for the games, but this time Smith, in particular, should be the sought-after target. He has an ongoing five-game point streak in which he’s scored three goals and five assists. He has 13 points in his last nine outings, and 24 points in 39 appearances this year. Smith just had Taylor Hall added to his line, which should give both players, along with David Krejci, a boost in value. The Bruins have three games remaining this week.

C/LW/RW Colin Blackwell, NYR (14%): With 12 goals and 17 points, Blackwell has reached career highs in both categories. The 28-year-old is playing just his second full season at the NHL level. It’s his first season with the Rangers, and lucky for him, he’s playing on a line with Artemi Panarin. Playing with an elite winger is bound to help anyone’s fantasy value. Good chance he’s available on your fantasy hockey waiver wire, and you can snag him to slot at any forward position for three more games this week against New Jersey.

LW/RW Conor Sheary, WSH (7%): Sheary is quietly having a decent season. In 40 games he’s collected 11 goals and eight assists, including five points in his past two outings. Not a bad point pace for a third-line winger, but he won’t be contributing much in peripheral categories. Washington has three games remaining this week, so he’s only worth targeting in deeper leagues that primarily focus on offense.

D Mario Ferraro, SJS (35%): In 41 appearances, Ferraro has one goal and 13 assists. The points aren’t his biggest draw though — it’s his physicality. He has 125 hits on the year, the sixth-highest among defensemen. In the past month alone, he has 59 hits, so he’s been ramping it up as the year progresses. He also has 68 blocks on the campaign. Pluck him from the wire if you need a player to deliver some hits and blocks, who can chip in offensively from time to time. San Jose has three games remaining this week.

D Mike Reilly, BOS (21%): Just like with Smith, it’s a good time to bring in Bruins. Reilly was acquired from the Senators and is playing on Boston’s second pair. With Brandon Carlo and Matt Grzelcyk out of the lineup, Reilly should see over 20 minutes of ice per night, including time on the man advantage. In 41 games this year, Reilly has 19 points — all assists. He has 56 hits and 37 blocks, which aren’t the greatest totals, but those may increase as he adapts to the Bruins system.

G Jeremy Swayman, BOS (25%): Last week I had mentioned both Swayman and Daniel Vladar as a tandem worth a gamble. Well, Vladar got lit up for eight goals against the capitals. Meanwhile, Swayman has a 3-1-0 record with a 2.22 GAA and .926 save percentage. Swayman has been the better of the two, as evidenced by him receiving the majority of the starts lately. Jaroslav Halak remains out, but Tuukka Rask is aiming for a return this Thursday. The Bruins play a back-to-back Thursday and Friday, so look for Swayman to get the Friday start if Rask does return. Then Boston has a game on Sunday, followed by four games next week. Three of next week’s games are against the Sabres, including a back-to-back, so Swayman will have more time in the crease.

For more help in putting the cherry on top of your fantasy hockey season, check out Mark Hillier’s Goalie Streams for Week 13.