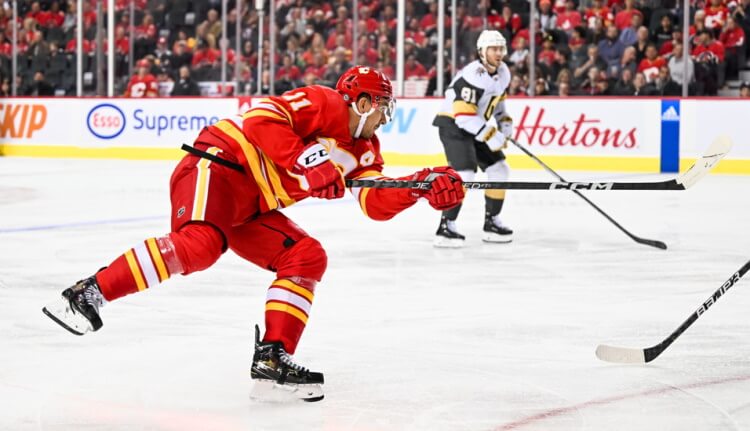 Injuries are piling up around the league, including several key players on the shelf. We’re seeing players rise up to the occasion to fill the void. While they may only be temporary fixes, there are good streaming options out there at every position. Whether you need to replace an injured or a slumping player, or just want to give yourself a boost, the fantasy hockey waiver wire is here to assist you.

Backlund has been rolling lately, picking up eight points in his last seven matches. He has an ongoing five-game point streak, and he’s doing a little bit of everything for the Flames. Through 30 games he has six goals, 12 assists, 18 PIM, 84 shots, 34 hits, a plus-6 rating, two power-play points, and two short-handed points. If you need a player that’s bringing offense and can help out in other categories, don’t hesitate to claim Backlund off the waiver wire.

Roslovic has had a very up-and-down season. He’s had multiple stretches where he’s been held off the scoresheet. Then there’s his recent run of eight points in seven games, which included a four-point performance. He’s centering the Blue Jackets’ second line, with Patrik Laine on his wing. Roslovic is also on the club’s top power play, where he’s scored four power-play points. He also has a pair of short-handed goals. He’s worth a flier for as long as he’s in a scoring role.

Last year, injuries gave Compher a top-six role for stretches of the season, and he set career highs with his 18 goals and 33 points. The Avalanche have piled up injuries again, so Compher gets put in a scoring role once more. He has 16 points in 27 outings, putting him on pace to easily surpass his career high with 48 points. He’s centering the second line and first power-play unit. He’s worth grabbing off the waiver wire until Colorado starts to get healthy and pushes Compher back down to his usual spot in the lineup.

Benning has quietly been having a productive campaign. Through 31 games he has a goal and 12 assists, along with 44 hits and 49 blocks. He’s averaging 19:19 of ice time per game, which is a three-minute increase from last season. The elevated role has resulted in Benning having the best scoring pace of his career. His career high is 21 points, but he’s on pace for 37 points. He’s getting time on the second power-play unit and has four points in his last four contests.

Miromanov has played just six matchups this season, being held off the scoresheet in the initial five. In his sixth game, he generated a goal and two assists. He’s played 17 games in his NHL career, scoring three of his four points in that game. What makes him worth claiming off the waiver wire? He played over 19 minutes in each of the past two meetings and is manning the point on the top power-play unit. That’s a worthwhile opportunity to take a chance for managers in deep leagues, at least until Alex Pietrangelo and Shea Theodore return to the lineup.

Darcy Kuemper was placed on injured reserve, giving Lindgren the starting role. Lindgren has started Washington’s past five contests and won them all. Through 13 games, he has a 7-3-2 record with a 2.81 GAA and .909 save percentage. Lindgren has been on a remarkable run, and it’s even more impressive given that he only has 42 career NHL games under his belt. He made only five appearances last year, although he did win each of those contests. His career high is 14 outings, which he will surely surpass this season. The 28-year-old is proving that when given the opportunity, he can hold his own. Once Kuemper returns, he will resume the starting role once again. In the meantime, don’t leave Lindgren on the waiver wire. He’s brought the Capitals within striking distance of the playoffs, and he can bring that same boost to your fantasy squad.

With Cal Petersen placed on waivers, Copley got the call to be Jonathan Quick’s backup. Copley started out strong, with wins in his first two appearances, allowing two goals against each contest. In his third game, he conceded six goals against. All six goals were scored in the third period, so aside from one disastrous period, Copley has been getting the job done. Like Lindgren, Copley has limited NHL experience, having played just 34 career games. These three games mark the second-most games of any season in his career. The Kings’ goaltending hasn’t been spectacular all season, so the 30-year-old Copley might find himself getting a decent amount of work.