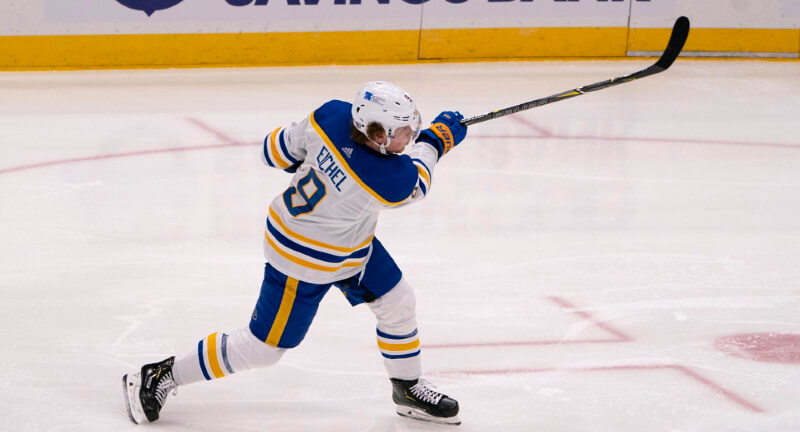 I want to focus on the keeper league sellers today – you know who you are! Your season has gone absolutely the opposite of how you’d like. You had a ton of injures or your roster had a Covid-19 pause every week. It’s hard to concede your fantasy hockey season to try and find the highest bidder. However, sometimes that’s all you can do to better position yourself for next season. Let’s try to find some trade targets to get in return for your best talents, and also identify which players you need to sell high on now who won’t be this good next season on your keeper league roster.

Two factors I like to consider when looking to buy low on trade targets for next season: Age and PDO. I look for players that are younger and still on track for a potential breakout soon who haven’t hit their plateau yet. It’s also smart to look for guys who just had a lot of bad luck this year, which you can help identify using the PDO stat. I try to find players with a PDO under a 1 who have the capability to shoot better or who I think will find better luck soon. You can find those numbers on analytic websites like Natural Stat Trick.

This might be the only time you can grab Jack Eichel on the cheap. His neck injury is a complete unknown – he may even play more games this season. If you can find a fantasy hockey owner who can be tempted into giving up a star to get assets to help them win now, I’d look heavily into it. There’s a decent possibility that Buffalo ends up trading Jack Eichel in the offseason if he fires management a trade request. Who would blame him? You could have him healthy next season with way more potential on a better team. This is a buy-low situation worth dealing plenty of producing assets for.

If you dig deep into Kakko’s analytics at five-on-five, there’s a lot of promise there. When he’s on the ice, the Rangers control the shot share at 57.44%. He’s a possession driver and it’d be a fairly good bet that eventually, that will turn into more offense if he keeps up his play. David Quinn has also given him an uptick in minutes lately – he played 18:29 against the Buffalo Sabres. His PDO is on the unlucky side at 0.984. Considering Kakko’s draft stock as a 2nd overall pick, this could be a valuable time to grab the 20-year-old as a fantastic future stash for a breakout next season.

Byram holds a lot of cache as a highly talented defenseman prospect. A fantasy owner may be a bit discouraged to see he only has two assists in his first 19 games of his career. I’d take advantage of that! If you look at Cale Makar and Samuel Girard, the Avalanche are clearly excellent at developing these players. Byram seems destined to end up as a top-four stud for years and years. This is the absolute cheapest you’ll probably ever get him for in a trade, so buy low and enjoy the ride. He’s only 19 years old and produced back-to-back point-per-game seasons in the WHL, so the offense will eventually come. Don’t worry.

I’m really studying the NHL scoring leaders and trying to predict who can keep it up for another year. You scroll down the NHL’s stat page and there are names who pop out as guys that you just don’t believe can produce at this clip again. If you’re a seller and you have one of these players, it’s smart to sell high, grab a haul and try to outperform that next season with your new assets.

I want to believe that Hornqvist can keep up this amount of production. He’s a horse on the powerplay – he just stands in front and takes abuse every game. Hornqvist also produces a decent amount of shots every season. I do notice he only put up 7 points in 13 games in the month of March. That shows us a slower pace than how he started this year. I’m skeptical of him as a great asset for next season because he has a history of injuries that he’s managed to avoid so far. He’s also 34 years old, making that riskier as we go. If you can find a young prospect who can help build your future team, Hornqvist is a player I’d feel comfortable with moving on from.

What an incredible season from Donskoi! Every time I watch the Avs, the line of Donskoi with Tyson Jost and Valeri Nichushkin seems to just dominant the other team with their cycle game. Their analytics are fantastic this season and Donskoi is the largest benefactor with 28 points in 35 games. However, there are clear red flags to try to keep this player into next season if you’re a seller. His career-high before this season was only 37 points. He’s shooting at a 30% clip which has zero chance of being able to keep up. He also isn’t a top powerplay unit guy for Colorado, so he doesn’t have that to fall back on later. He’s on an incredible run but sell high immediately.

This is a gut play for me. Wheeler turns 35 years old in August. He’s a big man who will always be able to pass but it certainly appears like he’s slowing down a bit. He still has 31 points in 37 games but his five-on-five possession stats are putrid. He has only been on the ice for 19 goals at five-on-five and 34 goals against. If this trend continues, I expect Paul Maurice might have to play him less next season, which means less opportunity for him to produce. The Jets will always give him powerplay time, but this is not the worst sell high option due to some concerning trends.